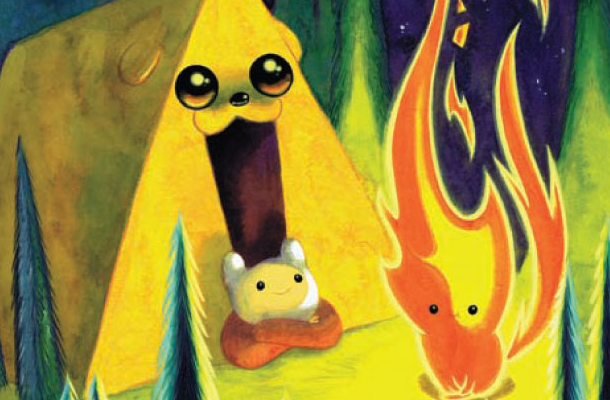 Unless you’ve been living under a candy filled rock for the past few years then you’ve undoubtedly heard of Adventure Time. Created by Pendleton Ward and aired on Cartoon Network, the animated series has captivated scores of viewers of all ages and from all walks of life. But who couldn’t fall in love with Adventure Time‘s bizarre mixture of over-the-top fantasy, post-apocalyptic back stories, subversive humour and instantly likeable characters.

Needless to say, Adventure Time quickly made its way off the TV screen and into the realms of comic books. But how does Adventure Time 2013 Summer Special compare to the TV series? Let’s take a brief look at the four individual stories.

Desert Treasure sees our heroes Finn and Jake travelling through a desert in search of the Secret Tunnel of Butt Butte. What’s inside the secret tunnel? Secret Desert Treasure of course! But the duo’s plans are set back by a “Troll Guardian Guy” who requires payment to access the tunnel. In true Adventure Time fashion, Jake comes up with a plan to make money by selling lemonade at the side of the desert road — warm cactus lemonade! It’s a charming little summery tale with a surprise appearance by the Ice King and a satisfyingly predictable ending. 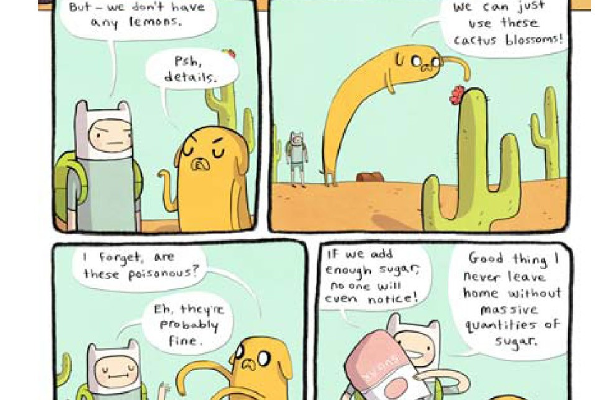 Fans of the Adventure Time TV series are most likely to identify with this weird story about a homeless pigeon, tongs and democracy. It starts as many episodes of Adventure Time do, with Jake making up breakfast and singing a random song about the ingredients.

After “rescuing” a pigeon from his underwear drawer, Finn decides to keep the bird as a new room mate. But when their new buddy takes one too many liberties (and a bath in Jake’s teapot), the whole situation turns a bit sour. But never fear, BMO comes to the rescue with the power of democracy! Although it should be  pretty obvious by now, The Sucker Seeker is standard fare for Adventure Time i.e. it’s ridiculously wacky and full of complete, random silliness.

Heart takes a more emotional turn and tells the tale of Marceline the Vampire Queen as she observes Princess Bubblegum’s attempts to find a Crystal Heart for use in her scientific experiments. The comic contains no dialogue or words whatsoever, leaving its message to be decided by the reader. Even so, Heart is clearly a story of friendship, isolation and compassion and shows the depth of Adventure Time‘s characters despite its primary audience being children.

For many, the inclusion of Cake the Cat and Fionna the Human in Adventure Time 2013 Summer Special and its final story “A Penny Burned” will be a major draw to the comic. It’s not surprising considering popularity of the gender-swapped inhabitants of the Land of Aaa and the impact their genders have on “normal” Adventure Time stories.

In this story, Fionna and Cake have been saving money to go to the Heroes & Adventurers Caucus, only to find that girls aren’t allowed in. The two must disguise themselves as boys to gain entry, but are shocked to witness other convention-goers worshipping male hero has-beens.

A Penny Burned offers a witty commentary on the topic of women’s acceptance at comic book conventions, while keeping the story fun with hearty doses of “girl power”.

All in all, Adventure Time 2013 Summer Special is a simple and innocent summer comic book read that will be enjoyed by Adventure Time fans regardless of age. While the book is priced at a hefty $4.99, the four distinctly original stories more than make up for it and, like other annuals reviewed by Geek Insider, it doesn’t require knowledge of other Adventure Time comic book series to enjoy.

Are you a fan of Adventure Time? Did you pick up Adventure Time 2013 Summer Special? Do you read any other of publisher kaboom!’s Adventure Time comics? We’d love to know what you think, so please leave us a comment in the section below!