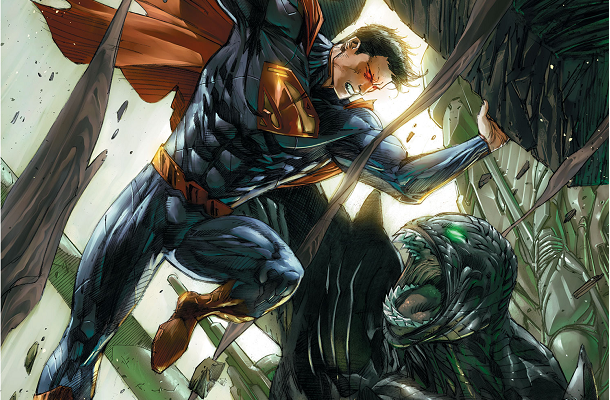 So far Geek Insider’s comic book reviews have focused on Marvel’s biggest and brightest in Wolverine MAX #6 and Avengers #10. But now it’s time to show DC some love as we look at their own big-name series in Geek Insider’s review of Action Comics #20 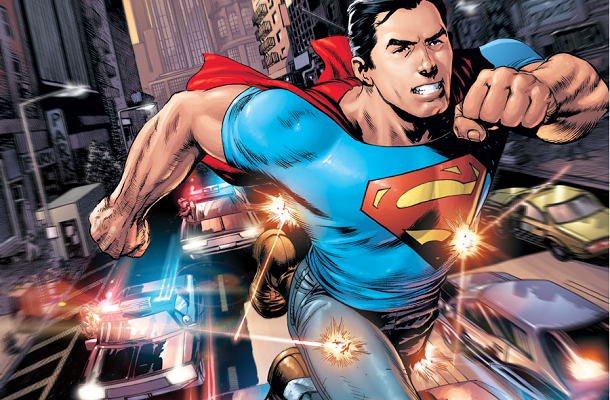 Action Comics is at the Forefront of DC’s New 52

Not only has Action Comics had the leading role in DC’s “New 52” rebooting of the entire DC Universe, but it’s been one of the most interesting and original super-hero comic series in recent years. Comic writer legend Grant Morrison had the golden opportunity to follow his dream and reinvent the wheel in 2011’s Action Comics #1, in which he lovingly rebooted Superman as a young Clark Kent whose misguided attempts at heroics had him on the run from the Metropolitan Police Department and the U.S. Military.

Unfortunately for Superman fans, Morrison finished his truly epic run with the series with Action Comics #18. Speculation arose amongst readers as to who DC would pick to handle their beloved series, with many unsure if anyone could match the quality of Morrison’s work.

Andy Diggle was set to be Morrison’s replacement as Action Comics lead writer, only for internal disputes to result in Diggle leaving DC after only a few issues. As of now, the first two issues of Diggle’s take on Superman have been published: Action Comics #19 and Action Comics #20. So what exactly has been going on in Metropolis lately?

Action Comics: The Story So Far

Grant Morrison’s huge, 18 issue story arc set the fresh, new Superman up in Metropolis, showed us his revamped origin story and introduced readers to a bigger, better DC Universe. They set the stage for the many years of Action Comics issues to come and are definitely worth hunting down, but aren’t necessary to in order to read Action Comics from #19 onwards.

Action Comics #19 had superman battle it out against a powerful android, only to have his hand infected with an unknown alien parasite. Due to having a super-powered immune system, this marked the first time Superman had even contracted a disease in his life. The issue featured a cliffhanger ending in which Superman plummeted towards Metropolis in a state of unconsciousness .

Action Comics #20 opens with Lex Luthor aggressively attacking his jujitsu master, who informs him that realization of the self, and not the cumulation of knowledge, marks the true power of the warrior. Luthor responds to his master’s insightful comments with a knee to the testicles, setting the scene for the rest of the comic.

It’s quite clear that writer Andy Diggle believes that he understands both Superman and Lex Luthor’s characters, but simply misses the mark. Luthor’s once intelligence-fuelled obsession with defeating Superman now comes across as overly aggressive, and Superman himself seems to have lost some of his finesse after his sky-high accident in the previous issue. 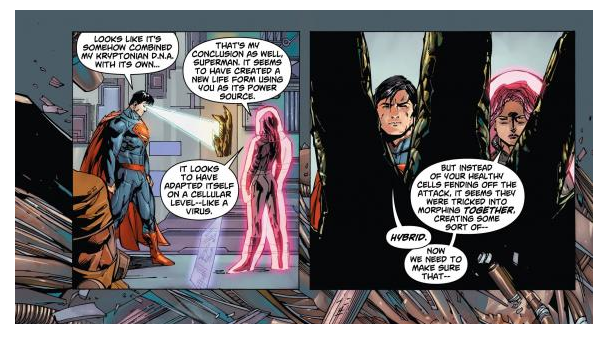 Superman wakes up in a high tech science facility known as “The Block” after being teleported to safety by Dr. Shay Veritas. Dazed and confused, Superman immediately checks on his infected hand only to find it completely parasite free. Dr. Veritas explains that Superman’s super-immune system managed to fight off the infection, but the resultant organism now contains Superman’s genetic material. She asks Superman to examine the “Hybrid” specimen, only to have it grow into a monster and attack Superman.

And that’s basically it.

This new enemy doesn’t speak, nor does it have any clear motivation to attack Superman. Of course, there’s room in later issues for the Hybrid to develop into something more interesting, but in Action Comics #20 it’s nothing more than a bland and unimaginative “monster of the week”.

Either side of the lacklustre action scene are some generally pointless lines of dialogue which exist only to state the absolutely obvious, or for Andy Diggle to show off some confusing pseudo-science biology-babble. Nothing of interest is divulged through character conversations and there’s certainly no real clues as to where this story arc is heading. 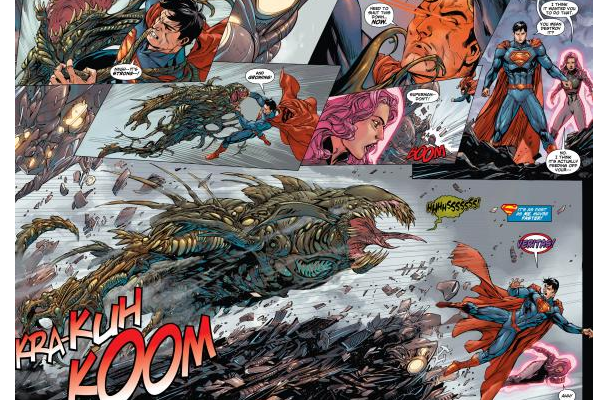 The majority of Action Comics #20’s art has been handled by Tony S. Daniel, with Matt Banning covering half of the book’s inks and Tomeu Morey dealing our the colours. The artwork is decent throughout, and while it’s not particularly stylised, it’s of a good quality and well suited to a mainstream super-hero comic book of this type.

Superman’s Father Jor-El Gets His Own Story

This new Hybrid storyline is definitely a disappointing follow up to Grant Morrison’s work on Action Comics. However, there’s some consolation to be had with the small, seven page story included in Action Comics #20 titled “The World of Krypton Part 1: Discovery”. This new story by Scott Loboell and Frank Hannah focuses not on Superman, but on his father Jor-El as a young man and junior member of the Kryptonian Science Council. 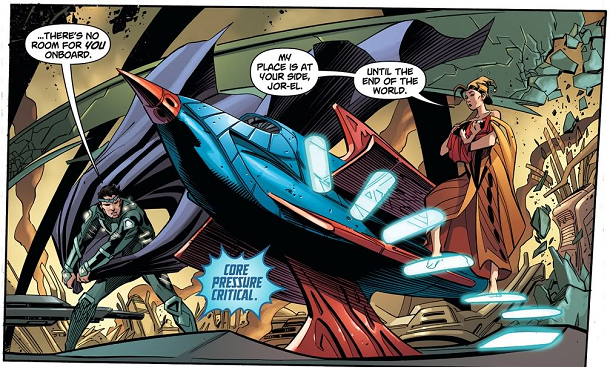 While exploring the depths of Krypton’s seas, Jor-El discovers the lost city of Xan as well as the once extinct Teklons that live there. The expedition may just save his life however as a military coup is staged a the very Science Council meeting Jor-El is supposed to be attending. It’s immensely more interesting than Diggle’s offering with some very majestic art by Philip Tan and Tomeu Morey once again on colour duty. Unfortunately, it’s simply not long enough a story to warrant purchasing Action Comics #20.

Action Comics’ Future Does Not Lie With Diggle

Andy Diggle’s stint with DC and Action Comics has ended before it’s even begun, but perhaps that’s for the best as the content of Action Comics #20 is not worthy of the iconic name it carries. Hopefully next month’s Action Comics #20 will bring something more original to the table.