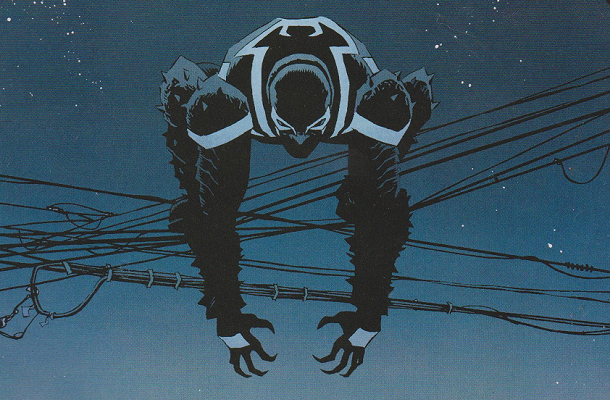 Venom #37 is here and with it we’re treated to the continuing story of bully-turned-hero Flash Thompson as he fights crime using the iconic Venom symbiote. How will Flash step up his game in the hunt for Lord Ogre? Has the secret of Venom been revealed? Can Flash keep the ever powerful alien suit under control? All this and more will be answered in Geek Insider’s review of Venom #37! 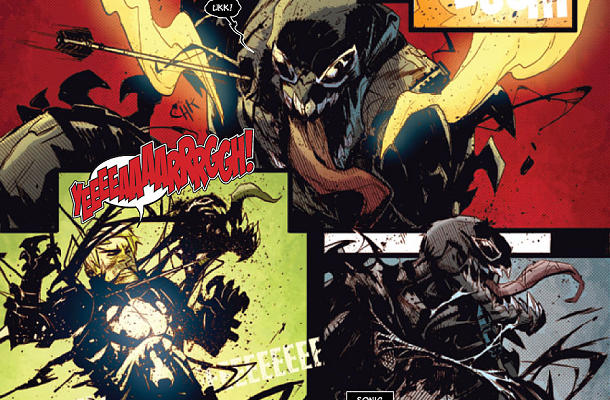 Marvel and Venom: The Story So Far

Many Spider-Man fans will remember Flash Thompson for his relentless bullying of Peter Parker through high school and his ironic idolisation of his web-slinging alter ego. Many years on and Flash embarks on his second tour of duty in the Middle East with the American army. After being ambushed by opposing forces, Flash’s only choice is to sacrifice himself to save his fellow soldiers. Although he survives, his legs are irreparably damaged and subsequently amputated.

Fortunately for Flash, the US military offer him the opportunity to fuse with the captured Venom symbiote that was retrieved from its former owner, Eddie Brock. As a crime fighting dark avenger at night and a wheelchair bound PE teacher by day, Flash tries his best to keep his life as simple as possible. This all takes a turn for the worse in Venom #36 when he realizes that a local crime boss named Lord Ogre has been trafficking women and children. Flash’s life just got a whole lot more complicated.

Venom #37 opens with Flash being bothered by news reporter Katy Kiernan who suspects Flash’s involvement with the Venom superhero. Kiernan was a former ally of Venom in previous issues and helped feed Venom vital information regarding various villainous organisations. Flash’s anger Kiernan’s appearance is understandable, but its his desperate attempts to conceal his emotions while feeding Kiernan lies about his involvement with Venom that really make this scene. It’s a strong start and sets the tone for the rest of Venom #37.

From here we’re taken into a full-on, 11 page action scene that gets progressively more intense as Venom is approached by a variety of Marvel hero knock-off bounty hunters including Blood-Spider, Jagged Bow, Death-Shield and more. This relatively long scene is extremely well done and fantastically mirrors Venom’s confusion and subsequent adrenaline rush at the appearance of these other “heroes” with our own head scratching and nail biting. It’s by far the focus and the highlight of Venom #37. 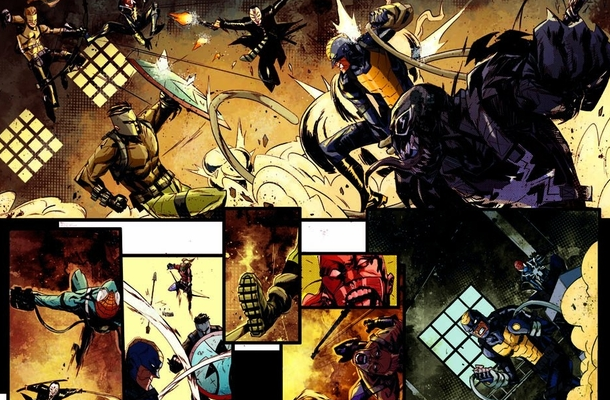 One aspect of Venom #37 that is markedly different from its predecessor is its supremely creative art style. Panels are less well defined with colors and patterns merging from one to another and even the interpanel colouring is generally darker shades of red on black, giving the issue a more “violent look to it”. The drawing itself has a gritty, pulpy early 90’s theme that perfectly fits the twisted world of Venom.

Of further amusement is the fact that the only change in this issue’s creative lineup in the replacement of artist Pep Larraz with Kim Jacinto. Cullen Brian remains as writer and even Lee Loughride returns as Venom #37‘s colourist. It’s an absolute joy to see these three talented comic book creators merge their skills together to find their own unique, cumulative style.

The previous issue of the series, Venom #36, was an extremely interesting one despite being an introduction to a new Venom story arc. Venom #37 increases the pacing even more and is full to the brim with everything that makes comic books so much fun. Its got Flash’s juggling of his night time activities and his day job, his struggles at maintaining his secret identity, a thrilling action scene and some interesting new characters. It’s almost as if Venom #37 is a gritty reimagining of a “Silver Era” comic book classic.

Many Marvel comic book readers, especially those investing in the “Marvel NOW!” event, may have grown accustomed to these series’ slow burning narratives. For example, here at Geek Insider we’ve divisively praised and criticised Jonathan Hickman’s slow paced, yet operatic work on the Avengers series. But having Venom exist separately to the broad scope of the Marvel NOW! event has its advantages and as a result Venom #37is a well written, well draw comic book that is a whole lots of fun to read. We heartily recommend it!

Evangelion 3.0 Will premiere in San Francisco