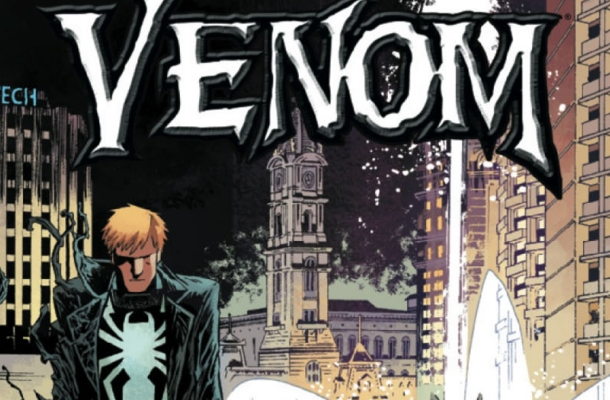 Venom #36 contains a version of the popular Spider-Man villain many readers may not be familiar with. But nevertheless, Flash Thompson’s bonding to the alien Venom symbiote is an interesting choice by Marvel and one that has seen great success for the Venom series since its debut in 2011.

But is Venom #36 a good place for new readers to start? Will Spider-Man fans find anything of interesting within its pages? And ultimately, is Venom #36 worth your time? The answers to all these questions and more in Geek Insider’s review of Venom #36!

Those familiar with Spider-Man and his enemies may be confused to hear that Venom is now under the control of former high school bully Flash Thompson. But the world of comic books is a dynamic one and nothing ever stays the same for long.

Flash Thompson has grown up since his high school days of tormenting Peter Parker and, after feeling inspired by his hero Spider-Man, Flash joins the US military for a tour in Iraq. When his legs are severely damaged after an ambush by enemy forces, doctors have no choice but to amputate the former amateur athlete’s legs from the knees down.

Unable to accept the changes he must make, Flash falls into a deep state of depression and succumbs to alcoholism. That is until he’s given an offer by the US military he cannot refuse; fusion with the captured Venom symbiote and the restoration of his legs. Since that time Flash has teamed up with The Secret Avengers, the Thunderbolts and has even battled it out with former Venom user Eddie Brock as the deadly Toxin.

It’s a been a complicated time for both Flash and readers of the Venom series. Fortunately Venom #36 goes back to the basics.

Venom #36 Offers Something New and Exciting

Flash Thompson is a man with a lifetime of mistakes to make up for. A man who’s trying to find his place in a world in which he doesn’t quite fit. Gym teacher by day, crime-fighting monster by night. And in between? Well, after the events of previous Venom issues, Flash is just trying to keep things simple.

It’s this train of thought that acts as the narration for the opening on Venom #36. It’s clear from the first few pages that this this issue is the start of something new, fresh and distinct from the rest of the Venom series and the exploits of the Venom symbiote in general. This makes Venom #36 an incredibly accessible issue that requires no knowledge of the series backstory aside form the brief Flash-Venom origin synopsis on the book’s credits page. 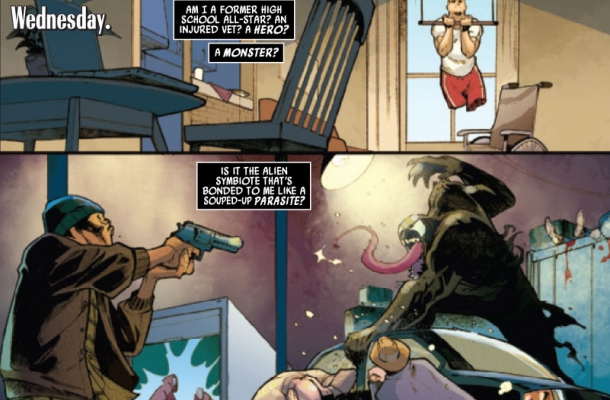 As Venom, Flash has spent his recent nights shutting down meth labs and beating up thugs in his search for Philadelphian crime boss Lord Ogre. These initial action sequences are interspersed with the much more peaceful scenes of a wheelchair bound Flash at his day job. This constant switching between the man and the monster not only shows the complexity of Flash’s “relationship” with the Venom symbiote, but also shows its dangerous flaws.

Flash vs. Venom: Who’s In Control?

While Flash’s thoughts as Venom give the impression that he’s in full control of his actions, his increasingly violent behaviour throughout the comic book suggests otherwise. Furthermore, Flash’s abrupt and alarming physical transformations show that deep within his mind these an Eddie Brock-like Venom lurking in the shadows.

This comes to a head when, during one of his gym classes, a bullying student reminds Flash of his misguided former days, resulting in him using his Venom powers to show the bully some humility and revealing his secret to onlookers.

Showing each side of the Flash-venom coin without explicit explanation is an impressive feat by writer Cullen Brunn. Even high profile comic book series such as DC’s Action Comics have been spoilt by unimaginative monologues and unnecessary narrative boxes; just read our review of Action Comics #21 for a good example.

As always, behind every good writer is a good artist. Venom #26 is lucky enough to have Pepe Larraz’s crisp drawings and chunky inks along with Lee Loughridge’s solid colouring. Both artists how off their flexibility by highlighting dark, gritty depictions of Venom’s violent tendencies against the bright, colourful gaieties of of Flash’s daytime activities. Watching venom morph and transform with his surroundings and across different action scenes is a joy to behold and there’s really no faulting the work of these two talented artists. 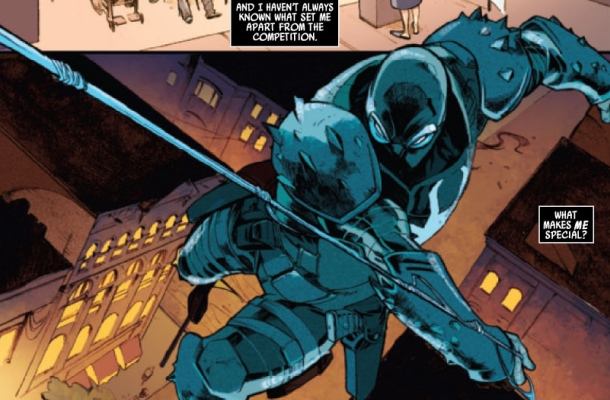 In fact, it’s difficult to find any faults in Venom #36. Unlike the comic books series that make up the “Marvel NOW!” event, Venom #36 is a simple, fast paced book with a healthy ratio of action to character and plot development. Those seeking a “bigger picture” may be disappointed, but as we’ve suggested in our review of Avengers #12, simplicity also has a place in any narrative regardless creative direction or scope.

If there were faults to highlight then they would be In the bully-turned-hero Flash Thompson himself. I personally find it difficult to emphasise with a character who has spent so many of his years with Marvel relentlessly bullying social outcast Peter Parker. Perhaps this is due to my own personal unfamiliarity with Flash’s work in the US military, but Flash will have to do a lot more outside of his Venom assisted crime fighting activities to win me over.

Aside from the somewhat disinteresting aspects of the main character and an unintentionally ambiguous ending, Venom #36 ticks all the boxes and is most definitely worth reading. Roll on Venom #37!

Are you a long time fan of Spider-Man and Venom? Did you prefer Venom when it was fused with Eddie Brock? Did you pick up Venom #36 and if so, what did you think? We’d love to hear what you have to say here at Geek Insider, so drop us a comment below and let us know!