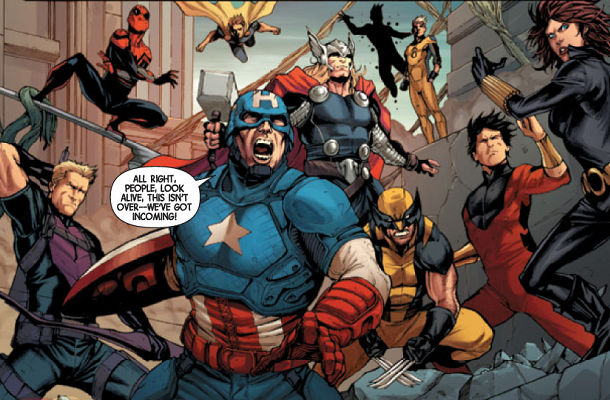 Avengers #16 continues the countdown to Marvel’s big Infinity event next month. But as part of the ongoing “Prelude to Infinity”, what new revelations will Avengers #16 bring to the ever expanding Marvel Universe? What does the birth of the Earth’s newest organism mean for the Avengers? And is it worth your precious time? Geek Insider will tell you everything you need to know in our review of Avengers #16!

Avengers #16 attempts to intertwine three separate series of events that are likely to collide during Infinity. The book opens in Tony Stark’s Dyson Sphere where Nightmask educates Star Brand on his newly acquired, god-like powers. Secondly, Captain Universe informs manifold of the incoming danger from beyond the stars by showing him the arrival of an ominous spacecraft on the planet Galador. The rest of the issue focuses on the Avengers’ struggle to combat the immensely powerful organism featured at the end of Avengers #15 and A.I.M.’s plan to capture it.

The high amount of plot lines doesn’t do this issue any favours. In fact, Avengers #16 is an absolute mess.

This conclusion isn’t a simple knee-jerk reaction either. For the past three months Geek Insider has published reviews for the previous six issues of Avengers. Each of these reviews has praised the bold, new direction Marvel is taking their flagship series. However, these same reviews have also voiced concerns over the growing lack of narrative cohesion and the general slow pacing of what is an ever fragmenting storyline. Avengers #16 exists as a manifestation of these concerns and proudly showcases everything that’s wrong with the Avengers series right now.

Avengers #16: What on Earth is Going On?

The aforementioned opening scene of Avengers #16 is where the trouble starts. Imagine being a new Avengers reader, how would this opening read? A highly advanced facility orbits the sun in which “the Star Brand” and another unnamed character speak of this “Star Brand’s” growing ability to “feel” every life form and see every atomic interaction in the universe while they both orbit the sun in a big metal sphere. Can Marvel really expect all of their readers to understand what’s going on? Considering that neither character or the installation in which they are housed has been referred to in any way during the last six issues, some sort of refresher is absolutely required.

The current, slow burning Avengers story arc will undoubtedly work amazingly well once it’s collected as a series of graphic novels, but Avengers is not a graphic novel, it’s a twice-monthly comic book, and the dwindling level of consistency between each issue has become unacceptable. 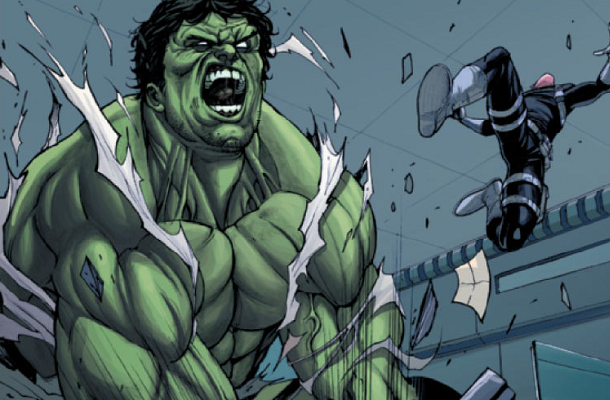 Captain Universe’s appearance doesn’t help matters either. Where exactly is planet Galador? How does Manifold know the danger posed by the unknown spacecraft? Who are the five poorly designed robots? What on Earth is going on? Long time Marvel fans might have figured it out, but for everyone else, it isn’t clear, making this section of the comic book another few pages of confusing and frustrating reading.

Even The Avengers Can’t Save This Comic Book

Despite the confusion generated by this issue’s initial pages, readers may look to the larger, Avengers-orientated section of Avengers #16 for a more coherent comic book experience. But they’re unlikely to find it.

After defeating the highly evolved, humanoid creatures in the Perth Origin Bomb crash site, the Avengers are attacked by what can only be described as the bland, grey love child of Mega Man and a metal girder. The action scene that follows involves the faceless metal monster bombarding the Avengers with a flurry of missiles and energy beams while constantly talking to itself in meaningless computerised gobbledegook.. Any actual action in these scenes is made all the more disengaging by ambiguous and obstructive explosions.

Marvel Have Made One Too many Editorial Mistakes

This being said, those hoping to see the Hulk are in luck as the mean green smashing machine destroys a whole office desk in a fit of mild annoyance. The last sentence was a stab at comedic sarcasm, but to laugh is the only thing readers can do as they stumble their way through the pages of Avengers #16. Stumble was exactly what writers Jonathan Hickman and Nick Spencer did when putting this issue’s script together. 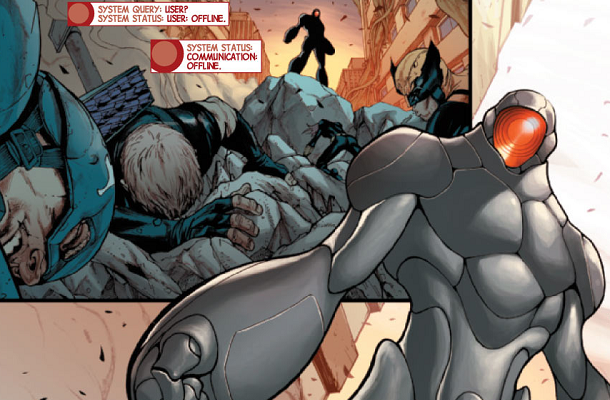 After being hit with a slew of missiles, the pretty-much-immortal Wolverine comments on how he’s lucky to be breathing. Immediately afterwards, Thor miraculously deduces that their faceless, speechless attacker is playing with them and “craves battle”. A pre-Hulk Bruce Banner also manages to figure out that the creature is male. It doesn’t make sense, it’s out of character and it’s a complete U-turn in quality for the two talented writers.

The situation’s no better in the artwork department either. A solid effort by Stefano Caselli is let down by one too many oddly drawn facial expressions and spine breaking hero stances. Spider-Man alone dislocates his shoulders, his knees and his hips on three respective occasions.

Avengers #16 is overly complicated, overly confusing and is easily the worst of the seven Avengers issues to be reviewed by Geek Insider. Nothing seems to work – be that the artwork, script or storyline – and it certainly raises more questions than it really should do.

While most readers still await a conclusion to the events of Avengers #10, Marvel’s editorial department has deemed it appropriate to make the series as convoluted as possible – probably in order to direct readers’ attention towards August’s Infinity event. Nevertheless, It’s practically impossible to suggest Avengers #16 to anyone, and it’s now incredibly difficult to suggest that anyone continue to support the series by purchasing Avengers #17. Proceed with caution.

Have you read over Avengers #16? Are you becoming as frustratingly dissatisfied with the series as we are? Will you stick it out until Infinity this August? We at Geek Insider love to hear what you have to say, so leave your thoughts in the comment section below!