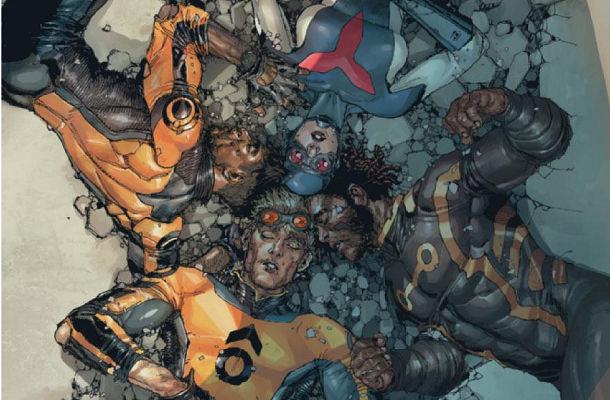 Avengers #14 is here and with it comes the first chapter in Marvel’s Infinity event. That’s right, after months of wading through writer Jonathan Hickman’s “Marvel NOW!” world building, the Avengers series is finally picking up speed.

But is this self titled “Prelude to Infinity” worth the wait? What secrets will be revealed? Is this the Avengers issue we’ve all been waiting for? Find out in Geek Insider’s review of Avengers #14!

Marvel’s Avengers: The Story So far

During a reconnaissance mission to Mars, the Avengers meet Ex Nihilo, an alien creature who has completely terraformed Mars and attacked the Earth with “Origin Bombs”. Ex Nihilo openly speak of his plan to transform the Earth and its inhabitants into one, unified, sentient organism. A perfect world.

The Avengers series is part of the Marvel Universe encompassing “Marvel NOW!” event that began in 2012 after the events of the “Avengers vs. X-Men” storyline. As a result, the Marvel Universe has been permanently changed and many new teams of heroes, such as the Uncanny Avengers, spring up across the world. In response to the rise in new mutants and super-heroes, Captain America radically alters and expands the lineup of the Avengers we all know and love.

Avengers #10 gave an insight into the Canadian Origin Bomb crash site, while Avengers #12 and Avengers #13 focused on the crash site in the mysterious Savage Lands and the evolutionarily advanced neo-humans that have appeared there. At the same time, Marvel gave us an insight into their future plans with the Free Comic Book Day 2013 issue Infinity, which revealed the return of Thanos as the Avengers villain this August.

The focus of Avengers #14 is not the titular heroes themselves, but the development of Ex Nihlo’s Origin Bomb crash sites. The comic book opens with a reminder that the crash sites, which are spread far across the face of the Earth, were deigned to work together in unison. Self-repair, self-sustenance and self-defence are a few of the roles each individual site is destined to play as part of Ex Nihlo’s plan for the creation of a sentient planet. 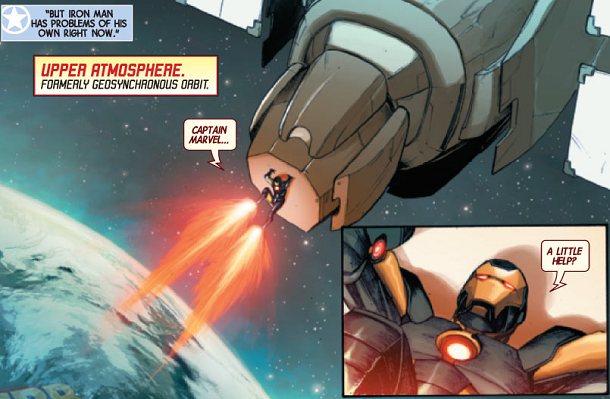 But when one of these sites begins to emit a communicative, electromagnetic signal, the world’s electronics go haywire. Enter the Avengers, who have their hands full in most of Avengers #14, catching falling planes and cleaning up nuclear power plant meltdowns.

In our reviews of past Avengers issues we’ve highlighted Jonathan Hickman’s fantastic ability convey the feeling of a vast, unknown Marvel Universe that’s bigger than anything we’ve ever seen. But Avengers #14 is the first time in many issues that a worldwide view of the Origin Bomb’s impact on Earth has been given.

It’s also the first issue in which the Avengers have actively dealt with global issues caused by the crash sites. In Avengers #12 and Avengers #13, the impression was given that the super-heroes were simply busying themselves while they waited for the inevitable, yet unknown, chaos to ensue. Now, without warning, the Avengers must find solutions to problems they cannot comprehend.

Bruce Banner’s scientific prowess is useless, Thor can no longer control lightning and Captain Marvel has no choice but to simply do what she’s told. The world is tearing itself apart and the Avengers’ combined efforts are not enough to hold it together.

Artists Caselli and Martin Are A Perfect Fit For Avengers #14

Frank Martin once again lends his eerie, unearthly colours to the pages of Avengers #14 but this time with the help of Stefano Caselli as penciller. Caselli’s work on Avengers #14 is not all too different from that of Mike Deodato’s in previous issues. Both men fit incredibly well with the creative direction of Avengers and the transition between the two is hardly noticeable. For an example of a comic book that suffers from switching artists, read Geek Insider’s review of Wolverine MAX #7. 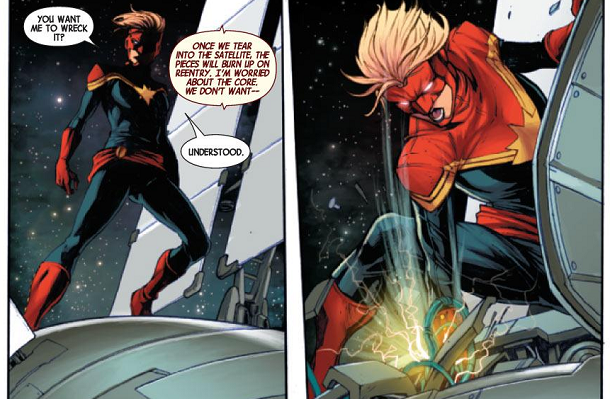 Although many readers will have been excited to see “Prelude to Infinity” proudly printed on the front of Avengers #14, just as many will be disappointed with the lack of plot development this issue offers. Avengers #14 certainly raises some interesting questions, but as is becoming a trend with Hickman, we’re offered no answers.

What is the true purpose of the crash sites? Why are they hostile towards the Avengers? Where are all the other Marvel heroes during these cataclysmic events? In fact, the Avengers themselves are the least interesting aspect of Avengers #14.

Avengers #14: What Happened To Our Heroes?

But why should we, the readers, really be emotionally invested in Marvel’s most popular super-hero team? They’re practically defenceless against their enemies and they’re unable to cope with increasing global chaos. In Avengers #14 the Avengers have no ideas of what they are doing.

T seems peculiar that the Avengers would be so boring in this issue when just a few issues ago we were treated to some fantastic character development in Hyperion; a character that doesn’t even have any dialogue in Avengers #14. I can’t help but find myself wondering if Hickman’s imagination has run wild and that the story he wishes to tell doesn’t really revolve around the Avengers or the Marvel Universe at all.

One more issue of the Avengers comic book and we’re still no closer to getting the answers we so desperately long for. Even though Avengers #14 is the first chapter in the Prelude to Infinity, the actual Infinity event doesn’t begin until August. With many weeks between now and then, do you think you’ll continue reading Marvel’s Avengers?

What did you think of Avengers #14? Will you ditch the series in favour of something less expansive? Perhaps Geek Insider’s reviews of Venom #36 and Astro City #1 are more to your liking?

As always, we’re eager to hear your thoughts, so let us know by leaving a comment in the section below!