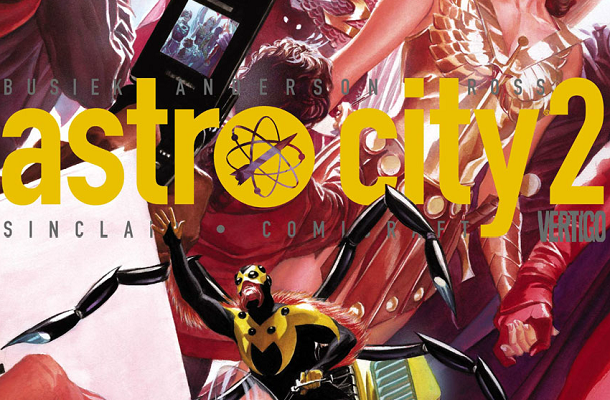 Astro City #2 is finally here and with it comes the start of a new Astro City adventure. In this issue, writer Kurt Busiek introduces us to Marella, an ordinary woman with an extraordinary job. As an operative of a call centre devoted to directing emergency calls to super heroes, Marella’s life takes many wild turns. But what exactly does her work in the world’s most important call centre entail? And how does she cope with the responsibility of her work? All this and more will be revealed in Geek Insider’s review of Astro City #2!

Astro City: The Story So Far

Housing the highest population of super heroes in the world, Astro City is an American city like no other. But unlike the vast majority of other super hero comic book series, Astro City makes it mark by focusing on ordinary people and how their lives are affected by the activities of the super heroes that protect them. Despite its deceptive issue number, Astro City has been around for quite some time. But after putting the series on hiatus, comic book writing legend Kurt Busiek has revived and modernised the series in this brand new volume.

In Astro City #1 we were once again introduced to the titular metropolis, but this time via the peculiar narration of the fourth wall breaking Broken Man. This crazed, purple punk rocker asks for our help in finding the perfect, ordinary man to represent humanity after Astro City is visited by a technologically advanced alien being. How can the Broken Man see us? Who is the “Oubor”? Why can’t the world’s super heroes be trusted? These were the many questions raised by Astro City #1, as for the answers, go back and check out Geek Insider’s review of Astro City #1.

Unlike the issue before it, Astro City #2 focusses on an entirely different aspect of Kurt Busiek’s unique super hero world. Those expecting to find an continuation of the Broken Man’s ramblings may be surprised to read a comic book that looks at one of the most boring, soul destroying workplaces on Earth – the dreaded call centre.

Young job hunter Marella didn’t get her hopes up about the call centre work she’d recently applied for. But after a string or peculiar physiological evaluations and job interviews, she realised that something fishy was going on. Little did she know that she’d just secured her place at the most important and technologically advanced call centre in the entire world. 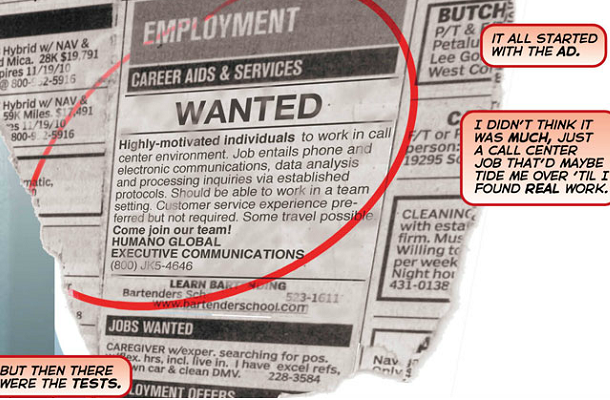 Astro City #2 tells the tale of Marella and her exciting job taking emergency calls for super hero assistance. It may sound like a daft idea for a comic book, but Busiek has managed to make it work. By looking at the super hero world from an ordinary person’s perspective, this same world suddenly feels more alive, more realistic and more relatable. After all, how many of us have had a rough time working in a call centre? And how many of us have wished our work made more of difference?

Astro City #2: The Best Call Centre In The World

Although the premise of Astro City #2 is interesting, the characters that feature in this issue are not. This isn’t because they’re ordinary people, but instead because everyone except Marella plays little to no role in the comic book’s plot, not that there’s much of a plot to start with. Busiek takes us on a long, dry tour of a futuristic, teleporting call centre, however it’s still just that; a call centre. It’s interesting to know that an administrative side to super hero activities exists, and it definitely adds to the world of Astro City, but it’s just not interesting enough to dedicate an entire comic book to.

That’s not to say that Astro City #2 is a bad comic book, but considering the excitement and mystery built up in the first issue, it’s somewhat perplexing as to why Busiek would shift the focus of the series so dramatically without even making any references to the first issue’s events. This being said, Busiek is a name most comic book readers trust, and it would be naive to assume that Marella’s actions won’t play a role in future issues.

The artwork of Astro City #2 is a mixed bag of atmospheric computer desks, funny faces and busy action scenes. There’s a fair few times in the book where artist Brent Eric Anderson clearly had one facial expression in mind, but ended up drawing another. Likewise, Anderson seemed to have so many ideas of what to do in panels depicting action that it’s difficult for the reader to know what to focus on first. 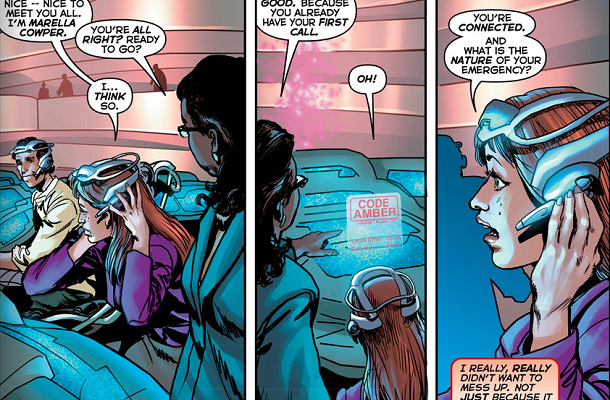 Alex Sinclair’s colouring on the other hand is quaint, simplistic and gives the whole book a carefree and nostalgic feel. Something must also be said of Alex Ross’s absolutely beautiful work on the cover of Astro City #2 which sets up the entire idea of a super hero filled world where the perspective of ordinary people says even more than that of the super heroes themselves.

Astro City #2 contains some interesting – albeit drawn out – ideas that help build up the world of Astro City and set it apart from the myriad other super hero comic books available. If you’re able to look past some of the artistic issues and the lack of any substantial plot twists, then Astro City #2 gives you a peek into a world that most super hero series fail to touch on – the world of ordinary people.

If you like what you saw in Astro City #2, then be sure to keep an eye out for Astro City #3 which features the super heroes of Honor Guard take on the evil Skullcrusher forces.

Are you excited? Did you enjoy Astro City #2? Have you read Geek Insider’s other recent comic book reviews? We’d love to know what you think, so be sure to leave us a comment below!