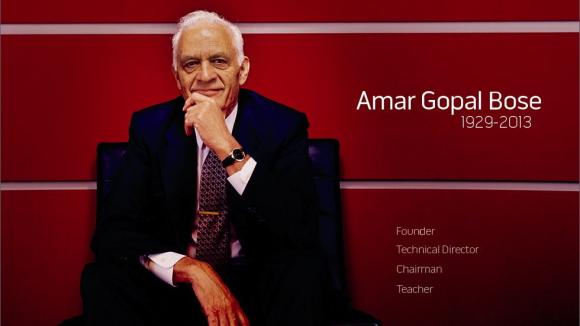 Amar Gopal Bose, the founder of audio company Bose, is no more. The audio pioneer died on 12th July, he was 83. The cause of death is unknown.

Bose is best known for founding Bose Corporation, perhaps the most famous name in the world for audio equipment. Dr Bose founded Bose Corporation in 1964, while working at the Massachusetts Institute of Technology as a professor of Electrical Engineering. He also served as its chairman and technical director. Under him, the company grew from strength to strength, and is an extraordinarily successful firm known the world over for its quality.

But audio isn’t all.  AG Bose is also remembered for being a remarkable teacher. After having graduated, post-graduated, and having earned his doctorate from MIT, Bose stayed on at the institute as a faculty member between 1956 to 2011. He was a Fulbright Postdoctoral Scholar, an elected member of the National Academy of Engineering and of the American Academy of Arts and Sciences, and a fellow of the Institute of Electrical and Electronics Engineers.

“Amar Bose was an exceptional human being and an extraordinarily gifted leader,” MIT President L. Rafael Reif said. “I learned from him, and was inspired by him, every single time I met with him. Over the years, I have seen the tremendous impact he has had on the lives of many students and fellow faculty at MIT. I will miss him. MIT will miss him. The world will miss him.”

His contribution to acoustics and audio has been immense. At MIT, In 1956, he started a research program in physical acoustics and psychoacoustics, which then led to his development of many patents in acoustics, electronics, nonlinear systems and communication theory.

Vanu G. Bose, son of Dr. Bose, and an MIT alumnus himself, said:

“While my father is well known for his success as an inventor and businessman, he was first and foremost a teacher. I could not begin to count the number of people I’ve met who’ve told me that my father was the best professor they ever had and how taking 6.01 from him changed their life.”

Tales of an Average Online Gamer Part 2: How to Avoid Ragequits