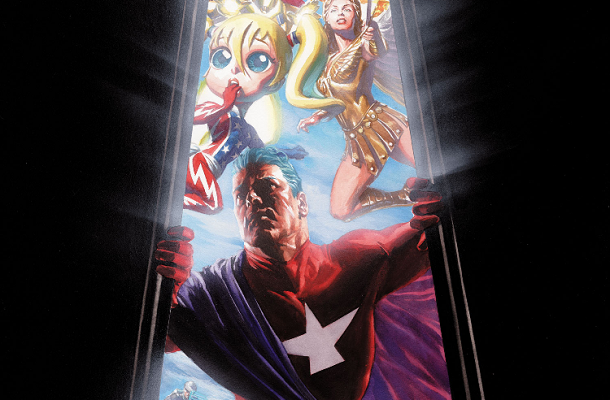 Astro City #1 sees the triumphant return of Kurt Busiek’s off-beat, super hero comic book series. It’s been many years since the series’ prequel  Astro City: The Dark Age and more years since we’ve heard from our favourite Astro City inhabitants. But even though there’s a lot to catch up on, Astro City #1 answers our burning questions with heaps of mystery. Confused? You will be! Here’s Geek Insider’s review of Astro City #1!

Astro City #1: The Story So Far

Astro City is a place like no other. A thriving metropolis, it’s home to the highest population of superheroes in the world. But most importantly, it is the home and workplace of millions of ordinary men, women and children without whom there would be no stories to tell.

Kurt Busiek’s Astro City is known so well amongst comic book fans for its many tales of humanity and how the residents of the city are very much affected by the actions of the superheroes that watch over it. Not that Astro City isn’t without well developed and memorable super powered characters. But those opening Astro City #1 and hoping to find the Samaritan, Beautie or Winged Victory may be surprised at the peculiar figure staring back. 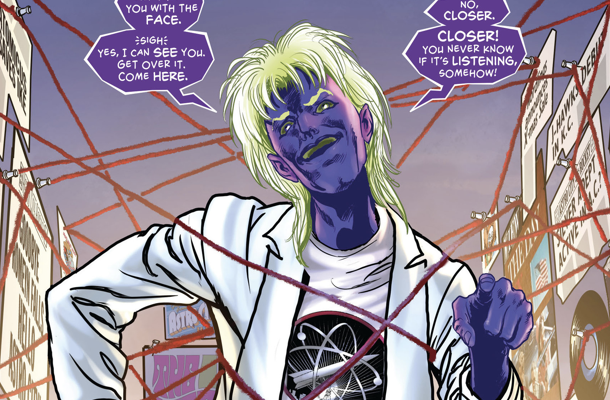 The purple skinned punk rocker known only as “The Broken Man” is both the narrator of Astro City #1 as well as our own personal guide to this issues’ events. In a series of monologues directed squarely at us, the Broken Man describes how an evil, unseen presence threatens humanity. According to him this “Oubor” monitors just about every mode of modern communication in the world of Astro City, but obviously can’t monitor us.

This kind of “meta-narrative” and fourth-wall breaking is understandably difficult to pull off, especially in comic books. Marvel fans are likely accustomed to Deadpool’s many adventures, but outside of comedy it’s unlikely the “merc with a mouth’s” shtick would work too well.

Busiek knows the medium, knows his readers and knows how to pull off his ambitious ideas. No sooner than we the reader begin to question the Broken Man’s confusing conspiratorial babble, does he explain that there’s no time to explain, and that it would take “a dozen issues”. 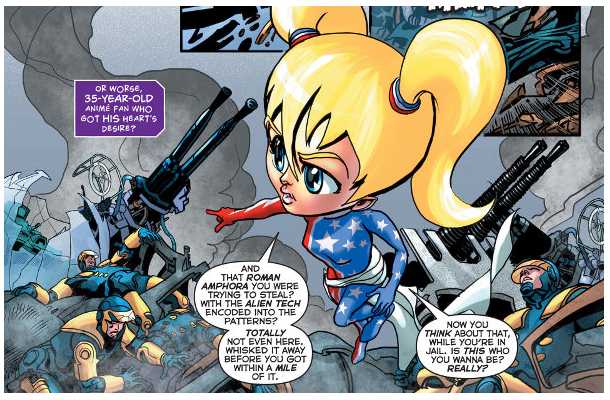 Busiek also uses The Broken Man’s unique characteristics to highlight the state of his real-life work, with quotes such as “spend a few years messing around with stuff that mostly happened thirty years ago, and you’re going to miss a few things” referring directly to Busiek’s work on Astro City:The Dark Age which was set during the 1970’s.

Is the Oubor a reference to DC? The “New 52”? Or the entire comic book industry? Is the freakishly bobble-headed American Chibi a dig at unrealistically portrayed female comic book characters? Or is Busiek making fun of manga in general? Astro City #1 and The Broken Man don’t let on, but after all, the story is only just beginning.

Despite the large collection of super-heroes to choose from, it is the absolutely ordinary father of two, Ben Pullam, who we, the reader, apparently select to represent humanity when the highly advanced and incredibly modest alien being Telseth arrives on Earth. But just as soon as we feel as though we have made an investment in the narrative of Astro City #1, The Broken Man takes it away. 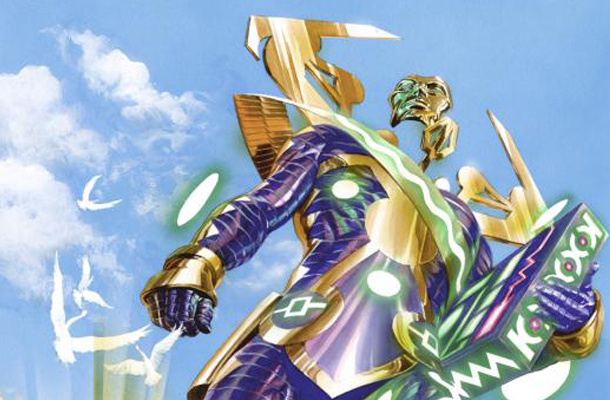 Astro City #1 doesn’t hold all that many answers, but what it does provide is a sturdy springboard into future issues. Busiek’s writing will be familiar to Astro City fans and intriguing to newcomers. Bret Eric Anderson’s artwork constantly switches from the realistic to the otherworldly. Finally, Alex Sinclair’s colours give Astro City #1 the shimmering vitality it truly deserves.

With a crack team of comic book veterans, a classic super hero setting and a mind-boggling conclusion, Astro City #1 is not a comic book to miss out on. Astro City #2 will be released on July 10th 2013, check it out!