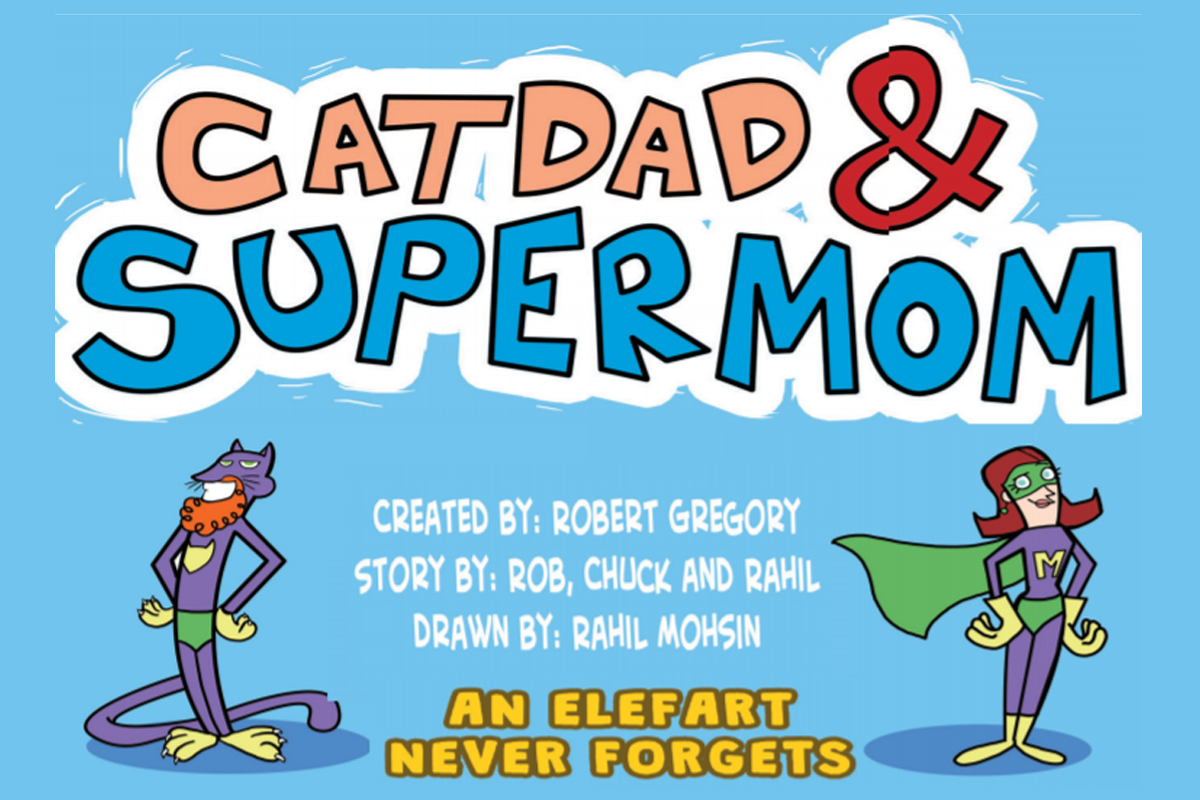 Every once in a while you come upon an unexpected gem; something you didn’t know you needed in your life, but now that you’ve found it, everyone within reach is going to hear about it. That’s how I feel about Rob Andersin’s CatDad and SuperMom – An Elefart Never Forgets.

I was an awkward, shy, and odd little girl who was often bullied and teased. It was well-after the fact, or in my dreams, that I would come up with the best come-backs or a solution to the problem. Needless to say, I enjoyed the bold lines, colorful illustrations, and unique characters of this comic, but it was the story that most resonated with me.

So… How do characters like CatDad, SuperMom, PotatoButt and a farting elephant battle against bullying? In Jaxx’s case, this cast of characters help him process these difficult things in his dreams, which can also be attributed to some really good parental advice, “A hero does the right thing even if it’s not the popular thing.”

The little boy in this comic is based on a real little boy named Jaxx. If you tune in to any of Rob Andersin’s livestreaming events on YouTube or Facebook, you might catch a glimpse of the towheaded kid zooming by, and making kid noises like most five-year olds do.

CatDad and SuperMom – An Elefart Never Forgets is an all-ages read and has recently won the Independent Creators Award for IP of the Year.

The Kickstarter That Kicks You in the Feels

But that’s okay because life is full of unexpected things. I mention this because Rob had sent me the entire set of his comics in PDF prior to our interview, and I read everything including CatDad and SuperMom – An Elefart Never Forgets.

Rob sent me a preview of his Kickstarter video before it went live and I have to say that by the end of it, despite having a copy of his comics, I was like, “Take my money!”

To date, CatDad and SuperMom – An Elefart Never Forgets has reached it’s initial goal and it is stretching toward the next milestone for an alternate cover.

Here’s the thing: Pledging toward this Kickstarter will undoubtedly help toward supporting an Indie creator, but Mr. Andersin is also sending work to the printer and helping them stay afloat during the Great COVID Pause.

Pay-It-Forward initiatives where large groups can individually donate a little bit makes a HUGE difference. While I won’t bully anyone into throwing their hard-earned money at any project, I will end by saying this: If you can’t support monetarily, do a solid and hit the share button and tell all your friends. The ripple effect does makes a difference.

I’ll end with this; bullying happens every day. The best way to combat it is to do the right thing all the time. It’s not easy to do and sometimes it really isn’t popular, but we can and should strive to be better. Rob Andersin is vocal about doing the right thing; being open to dialogue, and listening. He advocates for comic books and for a better world because he’s a Super Dad trying to make a better world for his son.