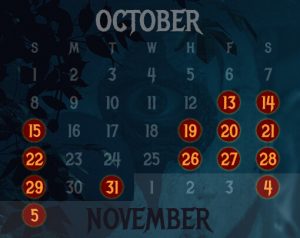 On Friday the 13th, the fright fest will debut at Columbia’s outdoor concert venue Merriweather Post Pavilion. The event’s theme is based on the story of an amusement park which featured clowns and various circus acts and animals but was shut down when its owner died suddenly. After the park’s owner, Mr. Archibald Evil, passed away, the park withered and rotted as animals and performers disappeared into the woods. One hundred years later, the amusement park is back as a haunted and creepy version of Archibald’s original circus. Some folks are afraid of clowns and the haunted circus and amusement park theme is certain to provide lots of thrills, chills, and creepiness, so much so that it is not recommended for younger children to attend.

Just like a regular circus or amusement park, CarnEvil will feature games in which patrons can win prizes. The games will of course be creepified in the Halloween spirit. The park will provide visual and aural stimulation via an abundance of mutant sideshow freaks, circus animals, and demented clowns, many of which will be out of view before suddenly surprising guests in the multiple scare zones set up in the trees and surrounding wooded areas. The games will be housed in the “Menacing Midway” section separate from the abandoned circus, in the same area patrons can also pickup food and drink. Halloween-themed food and cocktails will be available as will the event’s official CarnEvil beer made by Jailbreak Brewing Company. The fact that the event has its own beer and several sponsors indicates that the event’s organizers are pulling out all the stops to make CarnEvil the best it can be.

Tickets to the festival allow patrons to enter at any time, however entry into the Abandoned Circus is timed. Each ticket will have a designated time for the Abandoned Circus. The event’s organizers suggest arriving one hour before the time listed on their tickets so festival goers have time to take in the festival portion of the event before entering the Abandoned Circus. If you are considering going, you should purchase tickets ahead of time because each night no more than 1,300 people will be allowed to attend and some nights may even sell out. Parking will be free each night. General admission tickets will be $40.33 and VIP tickets $63.93. More information is available on the Carnevil website.