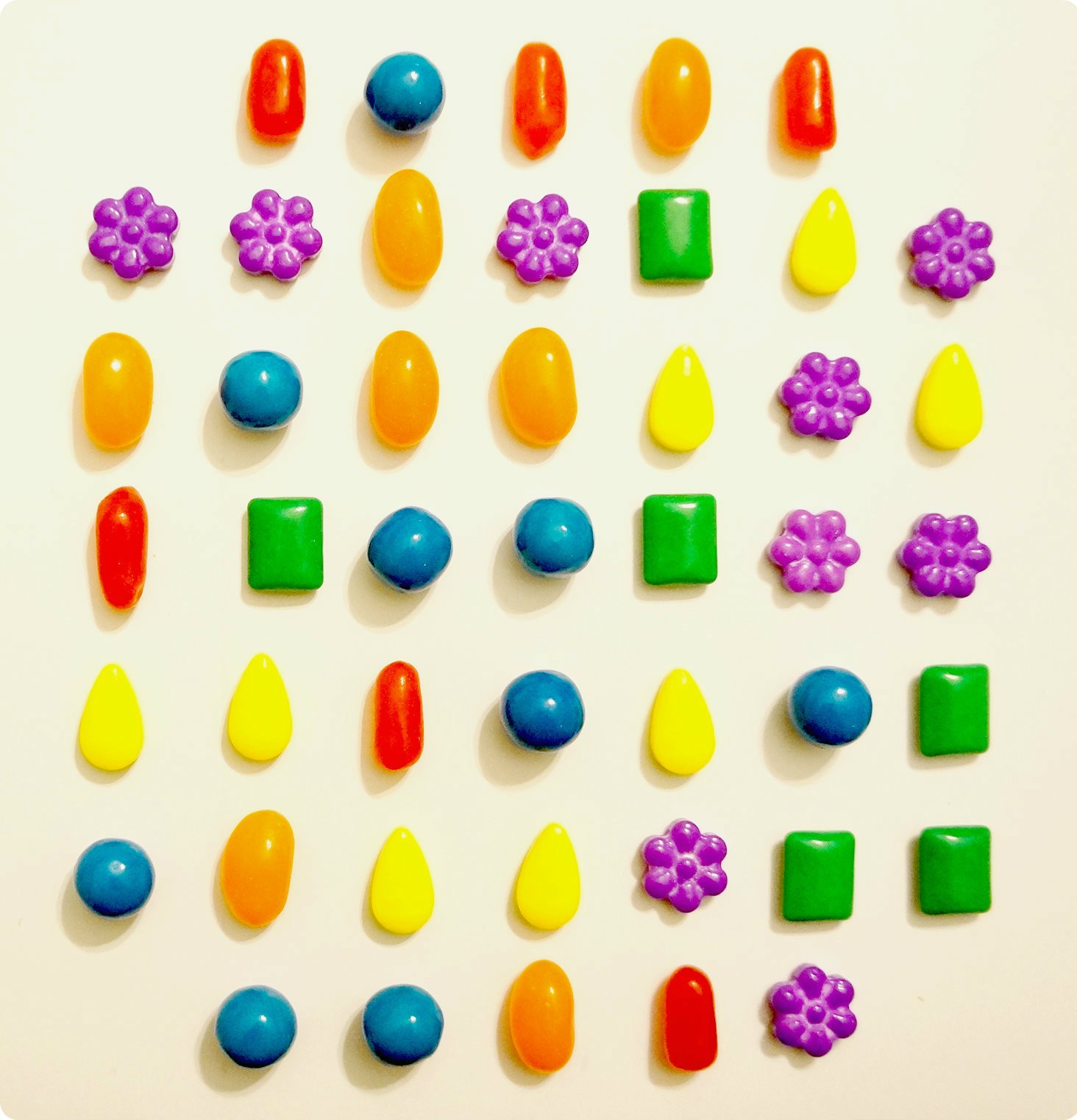 Even if you’re one of the few people who hasn’t been sucked in, you’ve probably seen the cute Candy Crush icon all over your Facebook feed.

King.com’s Candy Crush Saga is available on Facebook, iOs and Android. The simple mechanic of matching three candies of the same color doesn’t do justice to the addictive cuteness of this casual game. (I was at dinner with some other game developers the other night, and we all admitted to playing some Candy Crush crack!) Players are presented with a cute game board grid of cute candy, and are asked to clear the candy by combining three or more of the same color. 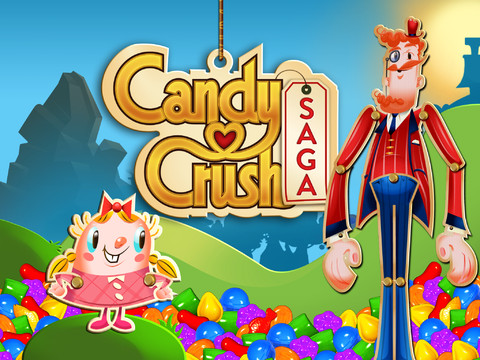 Combining more than three candies of the same color will make a candy power-up. These will be a striped candy, a wrapped candy, or a sprinkled candy, and yes, they’re just as bright and cute as the rest of the game.

Four of the same color in a row makes a striped candy, and then you can use that stringed candy to clear the entire row or column. Wrapped candies are made by popping three vertical and three horizontal candies at the same time. These wrapped candy clear a larger area of candies, like a bomb in certain other match-three games.

The best is a five in a row to get a cute sprinkled piece of candy. This is the best power-up, and of course, it’s the rarest to acquire. You might need to plan several moves in advance to create this one, but it’s worth it. Swap a sprinkled candy with a candy of another color to clear all the candies of that color.

And you can combine powers, by swapping a sprinkled candy with a striped candy. This turns all the candies of that color striped, and clears all their rows or columns. It’s a bit hard to make this happen without any paid upgrades (we’ll discuss that in a moment) but it’s great for clearing a difficult board, or clearing a board quickly.

Each level assigns you a maximum number of turns. If you can clear the board or complete the level objective before you run out of moves, you win! Any remaining turns become a super cute points bonus, called a sugar crush.

If you can’t complete the level objective before you run out of moves, the level fails, and it costs you one life. So you’ll have to keep a careful watch on the number of remaining turns. This is where Candy Crush ingeniously  plays on our casual game expectations. Matching three of a kind and seeing that candy pop feels so satisfying and productive! But you can be feeling productive while really wasting your limited turns.

Players of Candy Crush Saga can improve their game either by receiving help from their Facebook friends or by buying microtransaction upgrades.

Candy Crush Saga became Facebook’s most popular game in March, with 45.6 million MAU (monthly active users). Those adorable candies really are popular, so it’s safe to assume that some of your Facebook friends are already matching candies. You can give free lives to friends and receive extra lives from them in return.

Players can also purchase boosters and charms to improve the game. Boosters are inexpensive, limited-use power-ups. One booster gives the players a Lollipop Hammer that removes one piece of candy from the board. Another booster provides extra turns at the end of the level.

Instead of boosters, players can buy long-lasting charms instead. These are power-ups that last for the rest of the game, allowing players to make one purchase and keep making use of it, again and again. One charm increases that player’s maximum lives from five to eight, which means each play session would be extended! A very useful charm!

I’ve written some, ahem, criticism of freemium model games and how boring the player, until he monetizes is a depressing model for our entire industry. Boosters in Candy Crush Saga are used to beat levels, and, yes, at times to speed things up. I’ve found it possible to get a hundred levels into the game with monetizing, meanwhile the game is very profitable, which speaks to good difficulty balance.

Are you playing Candy Crush Saga? Admit it! And share your level in the comments!