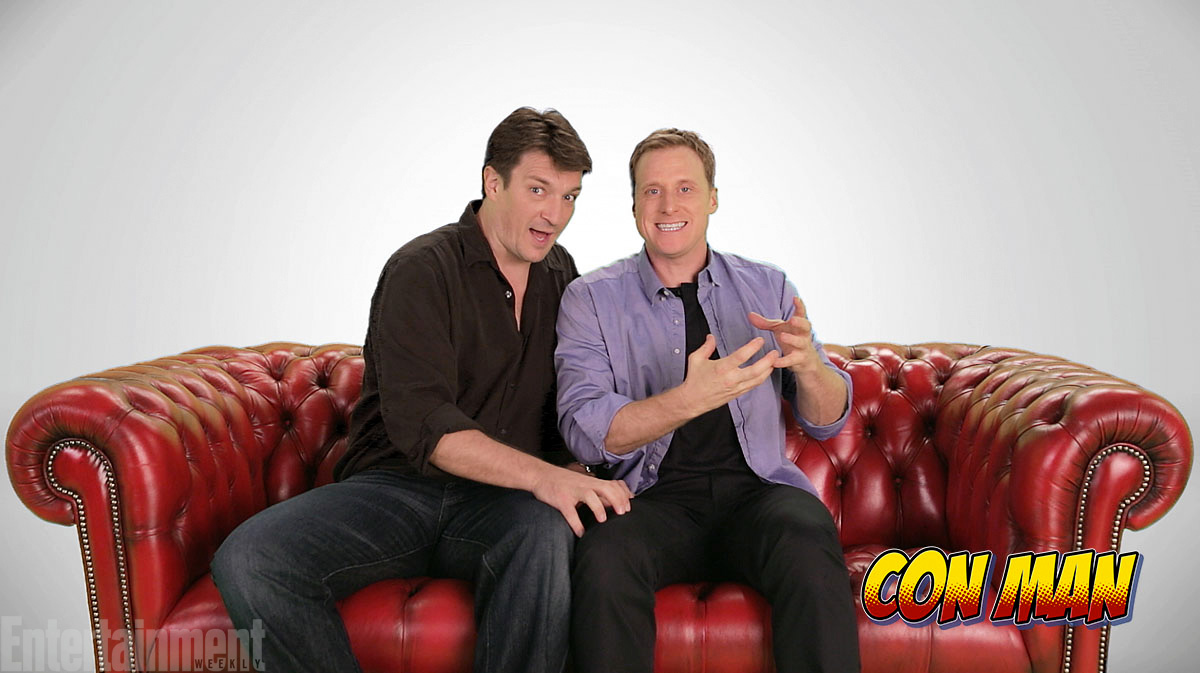 When most people hear the phrase “con man,” their first thought is of a suave, well-dressed, slick-talking man who deceives people into giving him money. This is not the case, however, for Nathan Fillion (Malcolm Reynolds, Firefly) and Alan Tudyk’s (Hoban “Wash” Washburne, Firefly) new series Con Man, which is about two actors (actors playing actors, hmm…), named Jack Moore and Wray Nerely, respectively, who became famous after their sci-fi TV show Spectrum was canceled too soon and later gained cult status (sound familiar?). 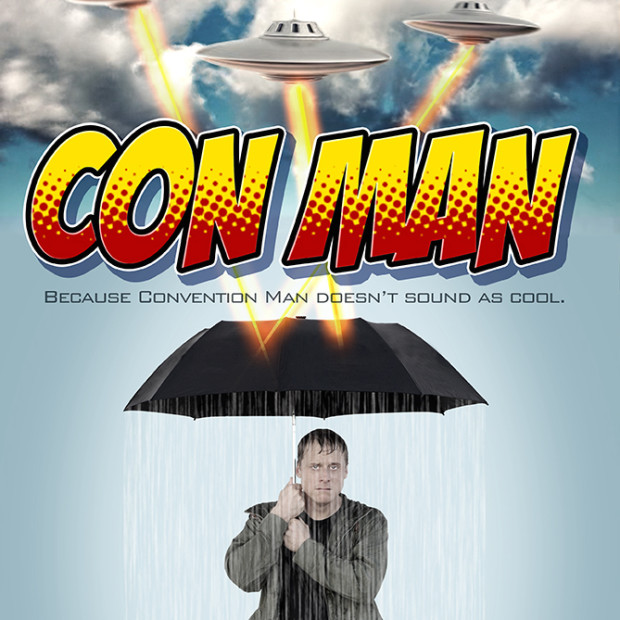 And The Crowd Goes Wild!

The gist of this show is that these two actors have gone on to two different kinds of fame: Jack Moore is now a famous, A-list actor, while Wray Nerely pays homage to his geeky fans by staying involved with the fandom and doing convention tours (hence the “con” in Con Man, “because convention man doesn’t sound as cool”). The series will follow Wray as he goes on a convention circuit to talk to the fans of Spectrum (though, funny enough, Tudyk says that his character Wray Nerely has never seen Firefly and even messes the name up). To fund this show, Fillion and Tudyk set up a crowd-funding campaign on Indiegogo, and the response has been explosive, ultimately raising more than five times the original funding goal, with more on the way. According to various statistics, this is in fact the biggest crowd-funded TV series in history.

The two actors have set up a pledge and reward system, which offers prizes such as posters, t-shirts, exclusive video access, a gif of Nathan Fillion and Alan Tudyk high-fiving, and even a trip to see Fillion and Tudyk in person (how cool would that be!). As the masses have declared this enterprise worthy of investment, it appears that the show will be bigger than anyone–even Fillion and Tudyk–could have imagined, and the two actors have even mentioned that Spectrum could be made into a comic book or graphic novel using the money raised. 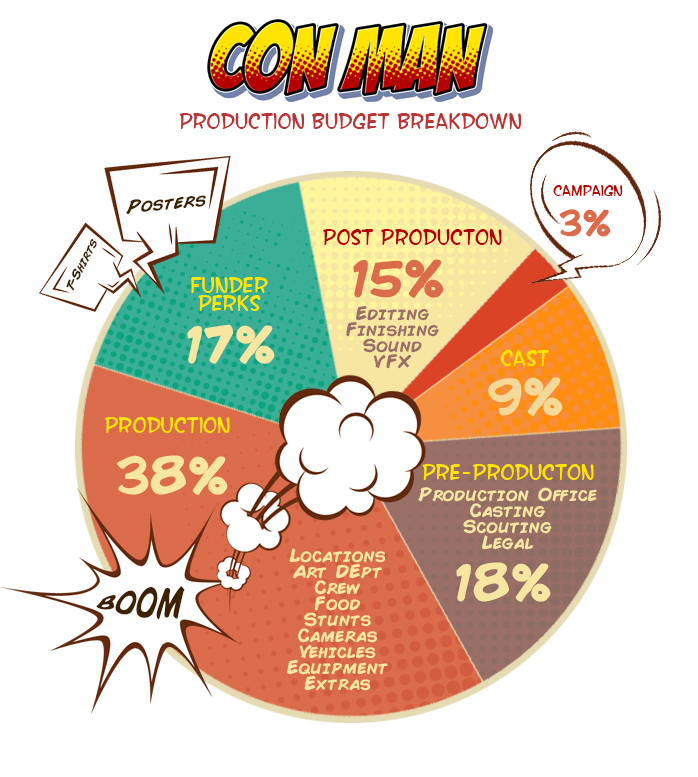 That’s right, the focus of this series will be on convention life. This is heaven for geeks everywhere. We all know that conventions are amazing (if wallet-draining), but they sum up the essence of the world of fandoms. And Fillion and Tudyk are making a show that is all about the fans (no wonder people love the idea!). Tudyk says,

I wanted to make a show that featured all of my favorite convention artists and friends together. Not only that, I wanted to celebrate the world where heroes, villains, zombie hunters, and space pirates all overlap. I especially wanted to work with my friend Nathan Fillion again…The convention world is unique and not easily understood from the outside. To tell this story right, you need to have first hand experience. Although, to tell this story for more than cable access production values you need a partner. In show business, a network/studio could add plenty to the business of Con Man, but at the expense of the show. Complications such as dictating what guests we may have, changing the tone of the show, going into production freezes, having a delayed release, or forcing the show to only be described by a tagline like “Extras meets Galaxy Quest,” though we will admit that is sort of an on the nose description.

Of course, Nathan Fillion and Alan Tudyk (and the actors they will be acting as) know firsthand the complications that can arise when a TV network takes charge of the show. They’ve gone as far as to poke fun at the network that canceled Firefly (*cough* Spectrum, sorry) in order to prove that it’s better not to use network TV for the making of this particular show. Therefore, crowd-funding became the “way to pay” for this pursuit, and the episodes, of which there will be twelve so far (far beyond the original goal of three), will air online. Tudyk says, “The most important reason to use Indiegogo is that we have genuinely passionate, stalwart and powerful fans. We’ve even seen fans get movies made. We realized pretty quickly we ought to cut out the middle management and just get you involved as soon as possible. We’ll have more fun having you on board this early in the process, and we know you’d love to see what we’re up to along the way.”

Also, what better way to honor the fans for whom the show is being made and about than to get them involved both literally and figuratively in getting the show on the road? The results–over $2 million in donations so far–speak for themselves. The fan base, which, according to Tudyk, ranges from truck drivers and actual cowboys to rocket scientists and bio-engineers (appropriate, right?), is alive and kicking and excited to see this show start. The two actors have expressed numerous times that they’re thankful for their fans, and that they couldn’t do it without them. They can feel the positive energy, which can be seen from their many silly and awesome “thank you for helping us reach our goals” videos on Indiegogo.

As of right now, neither Tudyk nor Fillion has given much detail about exactly what will happen on the show (spoilers!), though the teaser trailer might give you an idea.

However, Tudyk has mentioned that other actors such as Sean Maher (Simon Tam, Firefly) and maybe Summer Glau (River Tam, Firefly) will be in the show as themselves, which leaves one to wonder, “Who and what else is going to happen in Con Man?”

I guess we’ll just have to keep our eyes and ears and wallets open.

King of the Nerds Season 3 Recap: The Throne of Games Up For Grabs Again