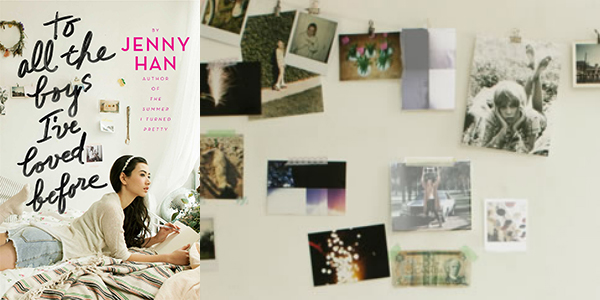 Jenny Han’s latest novel, To All the Boys I’ve Loved Before, is slowly falling into the hands of girls everywhere. I too have recently picked up this book and I’m here to offer my own thoughts as well as open up some room for discussion to hear what your thoughts are as well!

To All the Boys I’ve Loved Before is Lara Jean’s story about the letters she has written to her secret loves that all end up in the hands of each one of the boys, revealing all of her true feelings for them. I admit, as a writer I have done the exact same thing that Lara Jean has done. I used to write letters to every boy I have ever been in love with, with the intention of those letters never being read by the eyes of those boys. The difference between my letters and hers is that my letters were to actual boyfriends. Lara Jean never has any real relationships with any of the boys, rather she daydreams about a fantastical type of romance. Lara Jean is your typical 16-year old girl. She’s naive, observant, imaginative, and her idea of romance is very idealistic and almost too perfect.

I can relate to Lara Jean almost too closely because I too am a hopeless romantic. I’ve been told my expectations for what my idea of true love is supposed to be may be a bit too high and unrealistic. Lara Jean is the middle sister of the three “Song Girls.” Her older sister, Margot, moves away to college leaving her to take care of their youngest sister, Katherine, better known as Kitty. After Margot leaves for college, Kitty ends up taking Lara Jean’s box of letters and mails them out to all of the boys. Lara Jean is left to confront each one of them as true feelings start to come to surface.

Perhaps my favorite feature of this book is the family aspect that Han portrays. The family dynamics in this book are very admirable and respectable. The three “Song Girls” are being raised single-handedly by their father, a doctor. Their mother passed away, leaving them one “Song Girl” short. Margot is made to be the new maternal figure as she takes on most of the responsibilities to help her father take care of her younger sisters. At times, Margot can be somewhat annoying because she comes off as a perfectionist. However, if it weren’t for Margot’s help in raising them, Lara Jean and Kitty would not be the good kids they are today.

Neither of the girls get into any real trouble and Lara Jean even recognizes her closest friend, Chris, as a bit of a bad egg. Despite Chris’s drinking and frequent flings with the boys, Lara Jean knows how to keep her nose clean and not let Chris affect her. Aside from the family matters, I also love the character of Josh, Margot’s ex-boyfriend. He loves the Song family and cares about them as if he is part of the family. From the very beginning I sensed some sort of special connection between he and Lara Jean. When we find out that he did have a crush on Lara Jean once he reads the letters it was like a Yahtzee moment. In fact, I was pulling for Josh by the end of the book, rather than Peter, one of her other crushes and the one she has a fake relationship with.

To The One I Didn’t Particularly Care For

Speaking of Peter, the “relationship” with him strikes a nerve with me. Lara Jean and Peter both use each other to make someone else jealous. Peter is making his ex girlfriend, Genevieve, jealous and Lara Jean is more so trying to deny anything real with Josh by saying she is dating the hot lacrosse player and most popular boy in school. Lara Jean is making a huge mistake here because Josh really does like her and she ends up risking getting to know Peter more and developing feelings for him. This leads me to the way the story ends. Lara Jean is ending her story by beginning one more love note and it starts with “Dear Peter.” I was really hoping this story would go in a different direction, particularly in the direction of Josh, but luckily there is a sequel to this book that Han will be releasing!

I’ve posed some questions for you fellow readers and I would love to see your answers in the comments section!

3 Reasons Why Cosplayers Love Under Armour