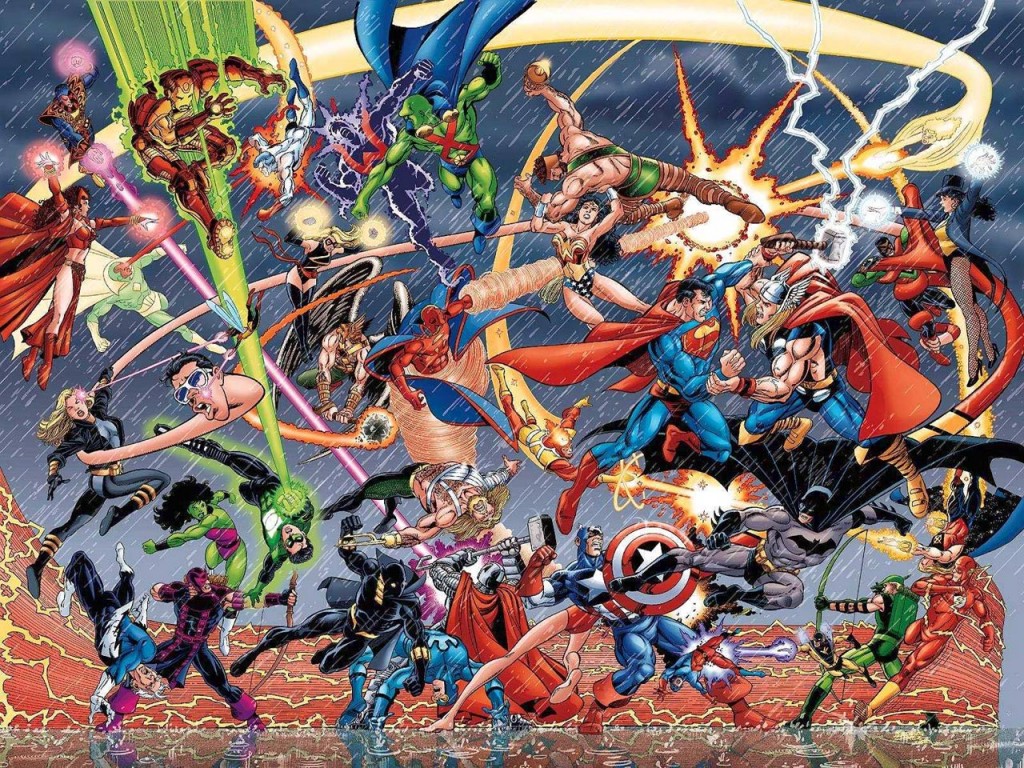 Why, because America, that’s why. We believe in excess. Since Iron Man and the Dark Knight landed there’s been a gratuitous serving of comic book films that have bloated the box office. And all of us dwelling at the bottom of this sea of superhero films continue to ravish each super powered treat as major studios continue to drill for more possible franchises to feed their profits and our hunger for the extraordinaire. While there have been some highs (Dark Knight, Avengers, Guardians…almost anything Marvel produced) and some lows (Ghost Rider, Green Lantern), the ominous outlook forecasts a storm of superheroes that’ll finally bring about the rapture.

Counting Down The Numbered Days

Peering ahead into the future, we see that about thirty titles are scheduled to be released. With 2015 as the starting line, three films are only slated: Avengers: Age of Ultron on May 1st, Fox’s Fantastic Four reboot on June 19th, and alas Marvel’s troubled Ant Man on July 17th. Then in the years to follow, more will storm the gates.

Closing In On Critical Mass

Since Marvel established their shared cinematic universe others are struggling to play catch up in the wake of their neighbor’s success. What they’ve failed to realize is that Marvel’s franchise system was a well-calculated and executed plan that was fashioned years before Iron Man assembled in 2008. Since Marvel has paced itself with no more than two films a year, thus granting themselves the time and resources needed to commit to each film, they’ve produced a portfolio of films without compromising quality. The surrounding studios in turn are in high gear trying to meet deadlines.

Now anyone familiar with the dot com boom of the 90’s knows that at some point we’ll begin the eventual decline down the curve as we are currently treading the peak. Though Marvel in the past have only slated two films a year maximum, the race towards profit is driving the young studios to compete more with their rivalries, i.e. DC, Fox, and Sony, and are going from two to three films a year.

It’s safe to infer that Marvel and DC will consider the risks ahead. To preserve their name, Marvel is likely to realize that they’re already ahead of the competition and limit themselves. While DC’s past mistakes loom over their current plan, they’ll learn when to hold back as they’ve done with Dawn of Justice, which was scheduled to be released in 2015 but was pushed back to 2016. With these two leading studios in charge they can keep the bubble from bursting, for now.

However, some franchises like the X-Men, Spiderman, and Fantastic Four, whom have stalled in the past and are looking to boom, suggests that Fox and Sony will produce as needed to remain in the race. The bleak outlook, however, remains dictated by Sony, who rebooted the Spiderman franchise to keep the rights from reverting back to Marvel. With the small yet lucrative success from the latest installments, Sony is looking to spinoff as many films and in effect will only drive the nail into the superhero coffin much further. At this point, the better outcome is a plateau rather than a dissent.

The scheduled movie plan for the years to come will surely end with the envisioned future from X-Men: Days of Future Past, where the common folk have grown weary of these super powered beings and all their shenanigans and have removed them from society. While studios are relying on the notion that all of us comic nerds will stampede to the movies with each installment and empty our wallets like a newbie at a strip club, the overkill influx will only be a testament to what your dentist had warned about candy, that too much of a good thing is a bad thing.