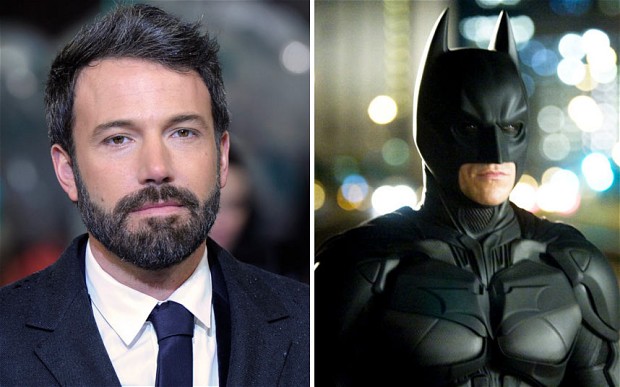 Ben Affleck is the new Batman. Yes, that Ben Affleck; the Jersey Girl loving, fake movie hostage smuggling, Matt Damon sidekicking, already been Daredevil, Ben Affleck. So, what does it mean? Is the movie Batman-Superman already doomed before it has even come out? Will Affleck replace Bale as the night borne vigilante that we conjure in our minds at the sight of the bat signal?

I can’t say I’m entirely excited for Ben Affleck to be playing Batman. Don’t get me wrong, Affleck is a damn good actor who has been in some of my favorite (and least favorite) films. The thing about Affleck is that I can totally see him as Bruce Wayne; stuck up, rich, but with a deeper side as well. I can’t really see him as the fear inducing caped crusader that dangles villains over building ledges by the ankle however. He just isn’t that scary, and I can’t really see him ever being that intimidating.

Since Ben Affleck is playing Batman, I suppose I could make the same joke every single other site has made about Robin being played by Matt Damon. I’m not going to though. Partially because I have had people genuinely tell me that he is in the movie, because some places have been actually reporting it. Let us just set that clear, MATT DAMON IS NOT PLAYING ROBIN. Now that that is out of the way, let’s talk about potential in the film.

I’m sure everyone remembers the disgrace that the Daredevil movie was. We all know it was a bad movie, but let’s think back to the film. Was it bad because of Affleck? Not not really, he actually did a decent job. It was everything around him that made that film a real page ripper. I say that I can’t picture Affleck as Batman, but before Dark Knight Returns I never could have seen Heath Ledger as Joker. Affleck is a great actor, so it is entirely possible that like Ledger he will put those acting chops to work sculpting a truly memorable interpretation of the character.

One interesting twist is that Affleck was rumored to be directing the Justice League film. Of course if he is also Batman that could certainly complicate things. I wonder if they’ll be looking at another director, or simply letting him take on both roles.