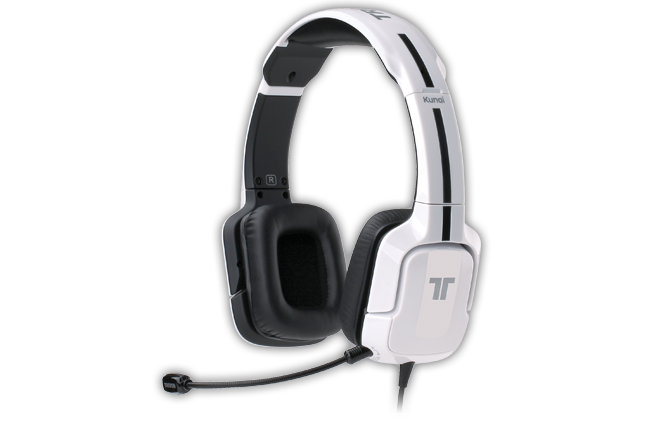 Ah, Tritton. Although not as well known as other gaming headset companies, Tritton (sister company of gaming-giant MadCatz) has always been a personal favorite of mine. Of course, that means I get all school-girl giddy when I know that I have a shiny new Tritton headset to review. Officially announced at E3, the Tritton Kunai is a mighty little headset that gives a lot of bang for a little buck. 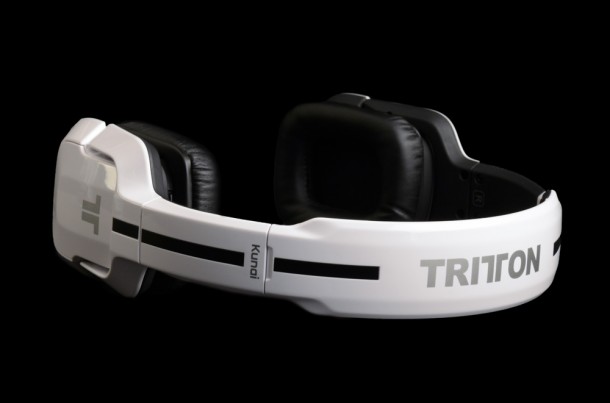 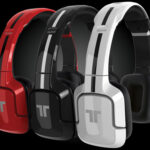 Color Choices- The Tritton Kunai comes in several different color choices. The unit I reviewed was (a somewhat storm trooper reminiscent) shiny white, however, the Kunai is also available in black and red.

Locking, Removable Boom Microphone – I was pleasantly surprised to find that the boom mic was not only removable for when I was not gaming or chatting, but it also twists to  lock into the headset, avoiding any unfortunate accidents that might involve the mic coming out during game play or Skype sessions.

Completely Adjustable– I can honestly say that I am IN LOVE with the adjustability of this headset. I usually have to be careful 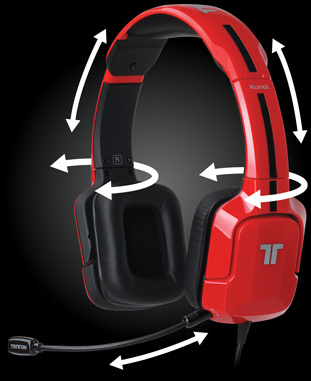 when choosing a gaming headset, simply because they are not really marketed for women. I was happy to find that the Kunai starts off very small and adjusts to add 1.5 inches on either side of the head, making it, quite literally, able to fit everyone. It doesn’t stop there, though. When placing the headset in the around-the-neck resting position, the Kunai ear cups fold down and out of the way to provide plenty of space and no annoying chin rubbing. The ear cups also swivel inward to fit snugly on even the smallest head.

Easy -to- Use Controls– One of my biggest ‘ Gaming Headset Pet Peeves’ is the highly-touted on-ear volume and mic controls. While this is purely personal preference, I just really like to be able to see my controls instead of trying to feel around for them on my ear cups. This may stem from the crazy amount of headsets I review, since I never really get comfortable enough with one pair to really know where everything is, but I was excited to see the little in-line control box dangling from the cord of the Tritton Kunai. The box contains the mic mute and the volume scroll, both easily accessible during game play.

Compatible With Nearly Everything – Usually ‘compatible with everything’ consists of PC and Mac. Tritton goes above and beyond with the Kunai, sporting compatibility with PC/Mac, Xbox 360, PS3, Wii U, and your mobile phone or tablet. I tried the Kunai with my PC, Mac, Xbox 360, original iPad, and Samsung Galaxy S3. It worked seamlessly, every time.

Robust Stereo Sound for Less Than The Other Guys – Generally speaking, I don’t expect amazing audio from a headset unless the price point hits at least three digits. Surprisingly enough, the Kunai could have fooled me with it’s incredibly robust sound. While there was a little “background buzz’, it was not overly obtrusive and the rich stereo sound was equivalent some of the more high-end headsets I have reviewed.

If you are looking for an affordable headset, the Tritton Kunai is the one for you. I would be hard pressed to find a budget set of cans with the same quality and sound that the Kunai headset has to offer. I used the Kunai for chatting, gaming, and music, all of which impressed me greatly. While I was expecting a middle-of-the-road quality headset (due to the low price point), what I received was incredible quality and value. I would highly recommend the Tritton Kunai to anyone who wants a high-quality gaming headset that will not break the bank and looks awesome, too!