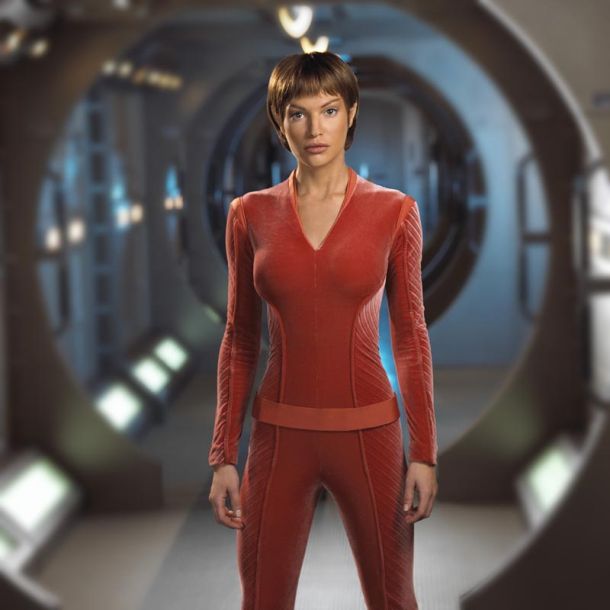 You know what’s great about Star Trek? Patrick Stewart’s voice at the beginning of every Star Trek Next Generation episode.

But other than Patrick Stewart (as if we needed anything else), it does what all good sci-fi series, movies and franchises do when it comes to the lady folk- It makes them tough. There are so many great gals to choose from, but this week it’s my favourite lady Vulcan- T’pol

The back story of the ‘Enterprise’ timeline in the Star Trek Universe is that Vulcans have been on Earth for a number of decades trying to prepare humans for the kind of explorative space travel they want to undertake. Humans are all “But I’m old enough to go into space” the Vulcans are all “Yes, but then we’ll have to clean up after it when you get sick of diplomacy”

T’Pol is the Science Officer on the first Enterprise, captained by Jonathan Archer (the NX-01). She’s not meant to be there, in fact, none of the crew are meant to be there. The Enterprise went a bit ‘rogue’ after it’s first mission, basically pulling a “HA HA! I’M IN THE SPACE!”. The Vulcans are monitoring the Enterprise’s progress, but are sceptical of how well the humans are going to go in the intergalactic community.

Their concern is warranted, if there were a spoken word opening to each episode (instead of a Rod Stewart track) it would go something like-

Space, the final frontier. These are the voyages of Starship Enterprise. Our continuing mission, to seek out new life and civilisations and then judge them because we’re kind of douchey that way. To boldly prove the Vulcans right, than anyone has ever proven them right before!

T’Pol is in an extremely unenviable position.

Not only is she surrounded by stinky humans (Vulcans have a heightened sense of smell, apparently we reek as a species). But the stinky humans resent her. Worse still, the high ranking, stinky humans are constantly challenging her orders or her observations. In the first season alone, she gets drugged, has guns pointed at her and an unbelievable amount of insubordination that should have sent most of them to the brig.

The constant barrage of anti-Vulcanism is palpable and it’s usually condoned by the captain! (Jean-Luc would never have stood for something like that).

How does T’Pol react? Like a good Vulcan. She raises a finely plucked eyebrow and then gets on with her job. But in her head, what’s the bet she’s thinking about Vulcan gripping their eyes out of their sockets, like in Kill Bill 2 amIright?!

Apart from having crappy co-workers, T’Pol also has to face a myriad of personal dilemmas, including discovering things about her own people’s actions that go against her own moral compass. She even goes against her own culture, for the benefit of the crew.

Does this mean she gets cut some slack? No.

Most people would get a transfer from a workplace with that kind of toxic environment. But not T’Pol. T’Pol wants to learn more and I think, she knows by learning more and by spending more time with the humans, she’s going to find a better way for her to be in the world and maybe even a better way for her race to be in the world. She also wants the humans to succeed, even if they’re constantly saying how she wants to undermine them. Without her guidance and logic, they’d find themselves in more sticky situations than they’d care to admit (and they won’t admit it).

Despite all of the negativity, she shows a genuine concern for the people on the ship. She offers meditation lessons to Hoshi, to help her overcome her anxiety attacks on away missions. She encourages Captain Archer to take time off because he’s over stressed and offers him insights into the Vulcan way of doing things (which he shrugs off because he’s in space to explore, not learn about other cultures…..Wait…. what?). She is constantly warning them of the dangers and is constantly being ignored. Then is constantly getting her life put in danger because someone ignored her.

She knows that the hate and mistrust she gets from the humans isn’t actually personal. If it does bother her, she doesn’t let it show or affect her actions. Which is kind of understandable because she’s a Vulcan.

But as a Vulcan, her emotions are actually quite intense. Physically she’s more capable than anyone on the ship. She’s also lived longer than everyone else on the ship. At no point does she use her obvious advantages to gain control, nor does she remove herself from a high risk situation.

That’s why she’s our Undistressed Damsel.