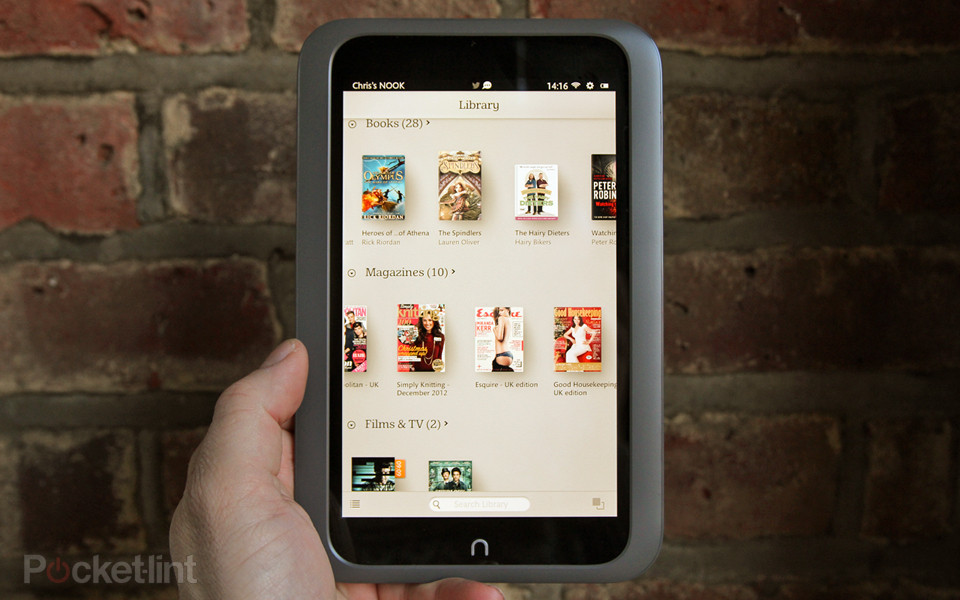 The Barnes and Noble Noo … Wait, what? Nook?

Similarly to the Kindle Fire HD, which I reviewed earlier, the first thing you’ll notice about the Nook is its display. The Nook boasts the highest resolution of any 7″ tablet – a wopping 243 PPI – way ahead of the iPad Mini’s 163 PPI and also ahead of the the 216 PPI of the Kindle and the Nexus. In fact, the display comes astoundingly close to the iPad’s 264. The screen resolution isn’t just for bragging rights, however. The Nook has been explicitly designed to display magazines and graphic novels – media that require high resolutions.

One of the main features of the Nook is the ability to create up to 6 different user profiles, allowing users to keep their content separate. This is an innovative feature in the tablet market as they are normally designed for one user. This feature allows the tablet to be shared by family members without the worry of  the kids messing up your settings, listening to your music or watching your films.

Again, similarly to the Kindle, the Nook runs on a heavily customised Android operating system. Also similarly to the Kindle is the inability to access all content from Google Play or run other browsers, such as Chrome. There are some notable app absences too: there is no Skype, Facebook or BBC iPlayer. These are significant losses and make the Nook less desirable than the Kindle or the Nexus.

Moreover, the Nook HD is lacking any kind of camera. Although not many people use their tablets to take photos, a camera has become a standard feature on most tablets and, in my view, puts the Nook way behind its competitors. No camera means no video chat.

That said, the Nook does offer the ability to upgrade its storage capacity with micro-SD cards, allowing the Nook’s memory to be upgraded to upto 64GB if needed. It’s the only 7″ tablet to offer such a capacity, making it an interesting option if you want to store vast amounts of music or video.

The Nook offers a crisp clear display and a good reading experience for magazines and comics. However, the lack of some major apps, as well as the lack of a camera means that both the Nexus 7 and Kindle Fire HD are better options for consumers.