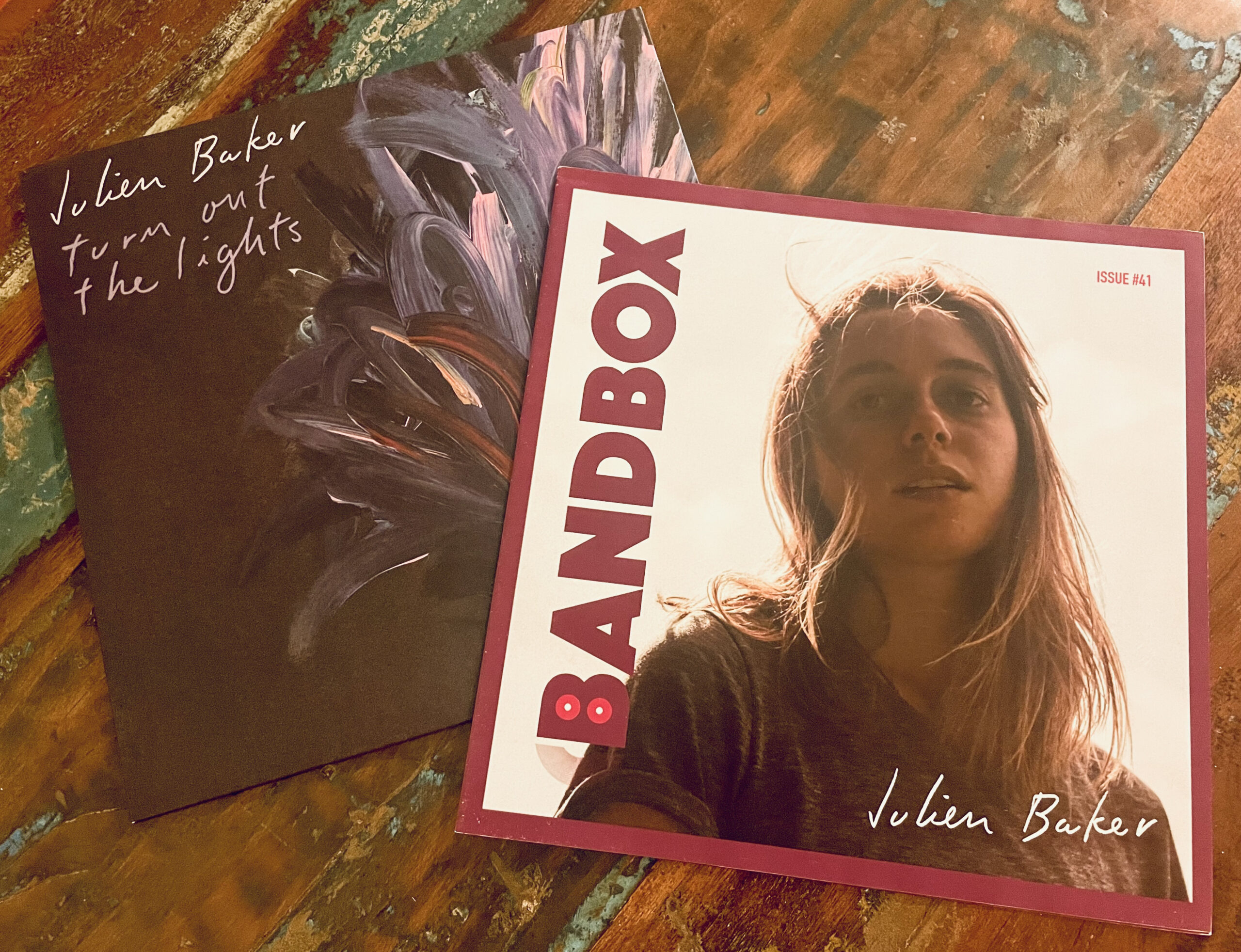 Did I mention Bandbox even offers FREE SHIPPING for members? They do. And it’s the icing on the record club cake. So what’s in this month’s Bandbox? An indie folk masterpiece from the inimitable Julien Baker.

The basics have officially been covered. So let’s have a look at what you’re actually getting in your box, shall we? This month, I was able to score Bandbox’s recent exclusive pressing of Julien Baker’s sophomore stunner Turn Out The Lights. And I gotta say, coupled with a fan zine that re-defines the term “deep dive,” this may be one of the strongest releases yet from the Bandbox gang. Check it out.

Now, as each Bandbox comes with an exquisitely crafted zine, there typically aren’t a bunch of extras included with their exclusive releases. Turn Out The Lights does, however, come with a snazzy, two-sided poster tucked away in that dust sleeve. Check it out.

Terms like “boldly original voice” and “unique sound” get tossed about on the regular in the indie realm. But if you follow the indie music scene on even a casual basis, you know they’re probably used a bit too often. Every once in a while an artist or band comes along who is legitimately worthy of such labels. And if you’ve ever heard the music of Julien Baker, you know she’s one of them.

Baker burst onto the scene in 2015 on the strength of her debut album Sprained Ankle, an album written in her dorm room, and recorded on donated studio time when she was just 20-years-old. Fronting Baker’s quavering voice, and soul-baring lyrics that could’ve made even Elliott Smith weep, the folk-tinged release would go on to become one of the best-reviewed albums of 2015, landing on numerous end of years lists to boot.

If Sprained Ankle heralded the arrival of a major new talent on the indie scene, its 2017 followup Turn Out The Lights proved Julien Baker was no one-hit wonder. If anything, the followup proved the young singer/songwriter had only teased her talent, and artistic ambition with her debut. While Baker’s songs continued to flaunt raw-nerve explorations of her struggles with faith, sexuality, addiction, mental illness, and the myriad hazards that come with being a part of humanity, her sound was a bit more refined this go round, thanks largely to the backing of Matador Records, who helped book the singer time in Memphis’ famed Ardent Studios to record.

Baker made the most of the moment, adding sonic layers to her new songs she could likely have only dreamed of while recording her debut, while still maintaining that album’s deeply intimate tone. Though piano, strings, and woodwind accompaniments are welcome additions to Baker’s arsenal, her powerful voice and sparse, yet often fierce guitar work are again the stars of the show. That combination of elements Turn Out The Lights to play through in a mix of hushed resonance and near operatic emotionalism capable of turning any listener in an emotional puddle on the floor by.

By album’s end, that’s exactly where most listeners will be. Yes, Turn Out The Lights is a daringly dramatic piece of work. But life is nothing if not dramatic. With these 11 songs, Baker paints a stunning portrait of a tumultuous one lived as much in light and darkness as it is the far more frequent spaces in-between. And as for the wax you’ll be hearing those songs on, well, it’s a work of art in and of itself.

If you’re already a fan of Julien Baker, you know her story is a genuinely fascinating one. So too is the recording of Turn Out The Lights. And if you want to know a little more about each, Bandbox’s Baker-centric zine is a truly legit place to do it.

And just for the record, if you think that pressing of Turn Out The Lights looks good, just wait until you hear it on your system.

The great thing about Bandbox is that they ultimately leave the decision-making up to you. So if you’re looking to snag a copy of your fave band’s most popular album on snazzy colored wax, you can do that. Ditto for some of those overlooked albums chock full of tasty deep cuts. While Turn Out The Lights appears to be sold out at the moment, you can still grab a copy of Baker’s equally-excellent 2021 release Little Oblivians! And yes, you really should.