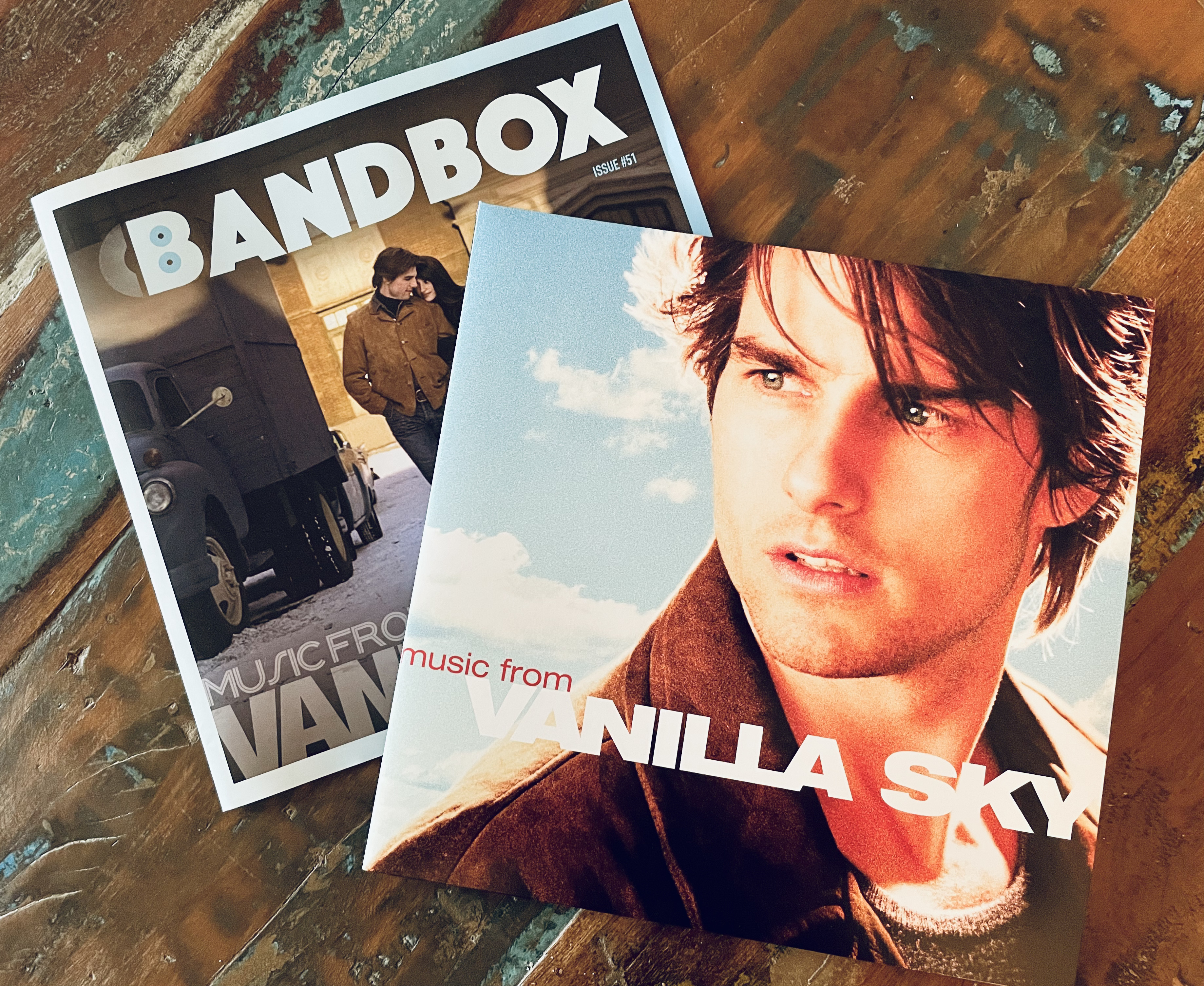 Having it your way really is the Bandbox mantra. Offering subscribers the choice of a single album from an artist you adore, and a fresh edition of Bandbox’s artist-specific fan zine showing up every single month, the B-Box service has effectively made it possible to do a little bin-diving from the comfort and safety of your very own home. And you can now dig their vinyl+zine treasures for a beyond reasonable $29 a month.

Did I mention Bandbox even offers FREE SHIPPING for members? Well they do. And it’s sort of just the icing on the record club cake. So what was inside my latest Bandbox you ask? No, you’re not dreaming, it’s a fresh new pressing of the original soundtrack to Cameron Crowe’s stunning 2001 psychological thriller Vanilla Sky.

Now that we’ve got the basics covered, I’ll go ahead and admit that the soundtrack to Vanilla Sky is one of my all-time favorites, so I was fully living the lucid dream when the Bandbox curation team tabbed it for the exclusive treatment. And I was just as stoked when I cracked open the box, because they knocked both the pressing, and the zine right out of the park this month. Here’s a quick peak.

On top of this pressing of the Vanilla Sky soundtrack being an exclusive, you should also know it’s extremely limited, so get it while you can.

And as far as the track list goes, check some of the names here and you’ll understand why you should be stoked about this release.

Gah, what an absolute gift this soundtrack has been over the years. And in all sincerity, I cannot thank the Bandbox team enough for: 1) Actually selecting a film soundtrack as their record of the month (which never happens), and 2) choosing Music From Vanilla Sky as the one to do it, because I’ve been trying to get my hands on a reasonably priced copy for years now.

As for the film that inspired the soundtrack, Vanilla Sky‘s mind-blowing tale of love, loss, identity, and, well pretty much every other facet of human existence is about as far from your typical Cameron Crowe joint as you can get. That’s partially because it’s the only film Crowe has made that’s based on material not entirely his own (with the director riffing on Alejandro Amenábar’s 1997 Spanish film Abre Los Ojos), and partially because it’s told with a twisted sci-fe bent.

In riffing on Amenábar’s astonishing original, Crowe delivered a film every bit as stylish, ambitious, and yes, even authentic. He also conjured a surprisingly personal film that, even in its wild flourishes of brain-bending sci-fi fancy, often feels as autobiographical his 2000 rock & roll drama Almost Famous.

Like that film (and pretty much ever other project Crowe has helmed over the years), music plays a major part in bolstering the mood of Vanilla Sky. Perhaps more than any other Crowe film, however, the music in Vanilla Sky merges so completely with the story as a whole, it feels as integral to its telling as the script, the camera crew, or even the actors. Simply put, Vanilla Sky would not work without these songs backing the action.

In that track list, you’ll find killer deep cuts from legendary artist like Bob Dylan (“Fourth Time Around”), R.E.M. (“All The Right Friends,” “Sweetness Follows”), Peter Gabriel (“Solsbury Hill”), Radiohead (“Everything In Its Right Place”), and The Monkees (“Porpoise Song”). You’ll even find an original cut from former Beatle Paul McCartney (“Vanilla Sky”), a track sung by Cameron Diaz as her onscreen persona Julianna Gianni (“I Fall Apart”), and a trio of electronic bangers in Looper’s “Mondo ’77,” Leftfield/Afrika Bambaataa’s “Africa Shox,” and The Chemical Brothers’ “Where Do I Begin” (featuring vocals from Beth Orton).

Of course, the soundtrack to Vanilla Sky also served as an introduction for many to artists who’d more or less been making their way on the fringes of popular music, including Josh Rouse, Red House Painters, and the late-great Jeff Buckley, who’s “Last Goodbye” absolutely brings down the house in the film.

If you’re anything like me, esoteric Icelandic rockers Sigur Rós were the biggest discovery from the Vanilla Sky soundtrack. For me, that was a legitimately life changing musical discovery as the band almost immediately became one my forever favorites. As for the song they contributed to the soundtrack, “Svefn-g-englar” is a is a breathtakingly beautiful slice of melancholic dream-rock that could not be better-suited to moody, ethereal vibe Crowe conjures in the film. And yes, it’s the standout song on a soundtrack that’s absolutely stacked with them.

A bandbox can rightfully be defined as “a cardboard box, typically square, for sharing music.” And yes, every single Bandbox lives up to that billing, allowing super fans of featured bands to delve deeper into their music than ever before via an artist-centric zine featuring interviews, album breakdowns, and killer behind-the-scenes photos.

Bandbox issue #51 dares to pull back the curtain on both the moody grooves that comprise Vanilla Sky‘s original soundtrack, and the head-spinning Cameron Crowe film which inspired it. Yes, there’s some pretty great pictures in there, and lots of music talk to boot. But there’s also an in-depth look at some of the many Easter Eggs Crowe hid throughout the film… which is super-cool. Check it out.

Did I mention there’s a lovely slab of exclusive wax in the box, yet? ‘Cause there is.

In fact, there’s two of those amber colored beauties.

And each will sound like an absolute dream on your deck.

The great thing about Bandbox is that they ultimately leave the decision-making up to you. So if you’re looking to snag a copy of your fave band’s most popular album on snazzy colored wax, you can do that. Ditto for some of those overlooked albums chock full of tasty deep cuts. And as it is, they’re currently the only place in the world where you can find this shiny new pressing of Music From Vanilla Sky.