Last month’s list of releases had me thinking Hollywood was going for a quality over quantity approach to their movies. Well forget that because there are 15 August movies hitting the big screens and most of them aren’t going to force the public out to an opening day screening. But since Dwayne “Biggest Movie Star in the World” Johnson is showing up, I guess it’s not a total waste. Here’s our August movie preview

I’m not so sure anyone was really asking for this spin-off, but the leads were fun together in Fate of the Furious. So we’ll see. Fast & Furious Presents: Hobbs & Shaw reteams Dwayne Johnson and Jason Statham star in a big action film as they attempt to take down a genetically engineered super villain played by Idris Elba. Yes, there are now mutants in the franchise that was originally about street racing. I expect the laws of physics were disregarded during the making of this movie.

August 9th– The Art of Racing in the Rain, Brian Banks, Dora and the Lost City of Gold, The Kitchen, Scary Stories to Tell in the Dark

Kevin Costner provides the voice of a golden retriever in The Art of Racing in the Rain. Yes, you read that right. Adopted by an aspiring race car driver (Milo Ventimiglia), the movie follows the dog growing up alongside his owner’s progressing life and career. Amanda Seyfried co-stars as Ventimiglia’s love interest. I should specify the dog can’t actually talk. Costner provides his inner voice. I suppose that improves the premise slightly.

Aldis Hodge from Straight Outta Compton plays the title character in Brian Banks, which is based on a true story. A top football prospect, Banks is convicted of a crime he didn’t commit. After losing 10+ years to jail and strict parole, he fights for his freedom with the help of his lawyer played by Greg Kinnear.

Just as you had finally forgotten all the earworms provided by the Dora the Explorer cartoon of the early 2000s, Nickelodeon is putting her on the big screen in a live-action adventure. Isabela Moner plays Dora in Dora and the Lost City of Gold. While poking fun at the format of the show, the movie has Diego, Boots, and all. However, it is meant for a PG audience this time instead of toddlers.

It hasn’t been mentioned much in the promotions, but the new crime-thriller The Kitchen is actually based on a Vertigo comic book of the same name. The premise has a group of wives continue the criminal operations of their now incarcerated gangster husbands. Elisabeth Moss, Tiffany Haddish and Melissa McCarthy star. 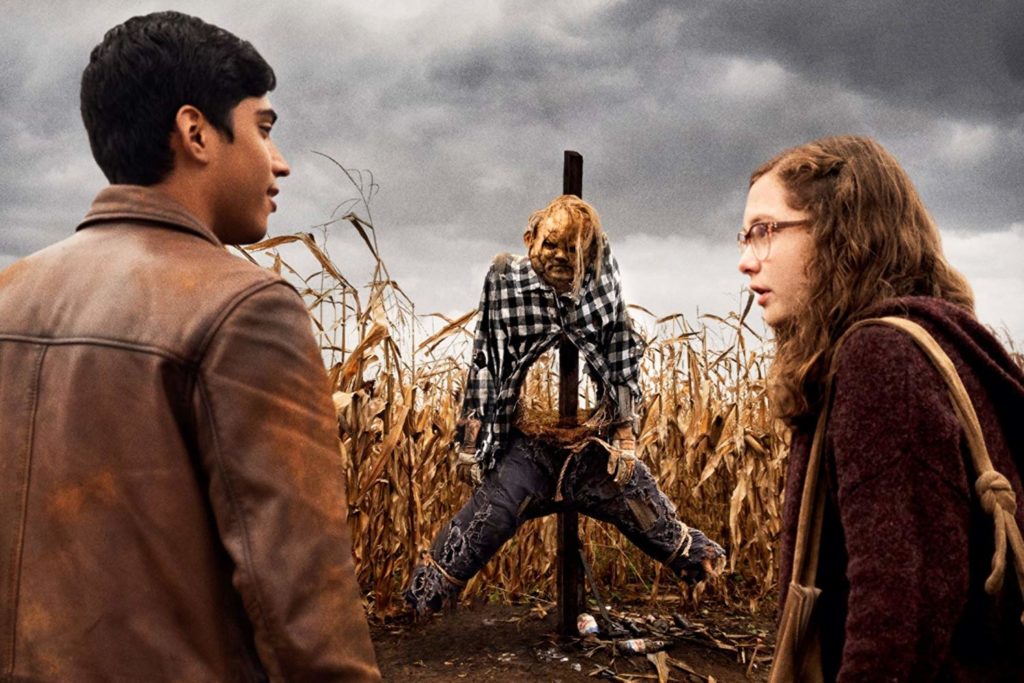 Scary Stories to Tell in the Dark (Source: IMDB)

Scary Stories to Tell in the Dark is exactly what it sounds like. A group of teenagers find a book filled with scary stories in an abandoned haunted house. Then one by one, each story comes alive terrorizing them individually and collectively. It kind of reminds me of the Goosebumps movie but much scarier and with no Jack Black.

In Angry Birds Movie 2 the animated birds and pigs continue battling each other and even become reluctant allies. If you really want a breakdown of the complexities of the story, you may be looking at the wrong movie. It looks fun though. Jason Sudekis once again leads the star-studded voice cast.

47 Meters Down: Uncaged presents a horror movie scenario that seems entirely avoidable to me. Four young women go diving in the ruins of a Mayan temple in the ocean. Yeah there are creepy skeletons and stuff there, but a big ol’ shark is the more significant problem. So now they have to survive. There is a lot of screaming while wearing scuba gear. Those are horror bubbles. Maybe next time don’t go free diving in shark infested waters. If there is a next time… (Cue evil laughter.)

Taking place in Great Britain during the late 80s, Blinded by the Light has a teenager (Viveik Kalra) feeling the pressure from the expectations of his traditional parents. But when a friend introduces him to the music of Bruce Springsteen everything changes and he begins to break free. In multiple scenes the lyrics actually feature on screen to show their significance to the lead.

It seems Good Boys is based on the idea that it’s funny when kids swear and deal with themes much more mature than they are. Jacob Tremblay, Keith L. Williams, and Brady Noon play sixth graders determined to get to a party. But on the way, they accidentally steal their teenage neighbor’s drugs and go through a bunch of Superbad-esque situations. Seeing as the movie has some behind the scenes ties to that hit, we shouldn’t be surprised.

Cate Blanchett stars as a one-time architectural artist, who left it all behind to raise her family in Where’d You Go, Bernadette?. Now when an opportunity arises to relaunch her career, she takes the leap… without telling everyone where she went. The comedy co-stars Kristen Wiig, Judy Greer, and Billy Crudup.

August 21st-23rd– Ready or Not, Angel has Fallen

Ready or Not stars Samara Weaving as a bride on her wedding day excited to join her husband’s eccentric and rich family. But then her fiancé reveals she has to win a game to be initiated. It’s not as fun as she first imagines. Apparently the family is cursed and thinks they have to kill her before dawn or they all die.

I was surprised when I saw that a third movie in Gerard Butler’s Fallen series was coming out. Were the previous ones even successful? Well apparently Olympus Has Fallen and London Has Fallen did enough to bankroll a threequel. So now here’s Angel Has Fallen. Butler’s secret service agent character has been framed for attempting to assassinate the President. Why would he do that after saving everyone in two whole movies? Can he evade capture and find the real would-be assassin? Probably.

David Oyelowo stars in a creepy murder mystery called Don’t Let Go. After his niece and her parents are murdered, he gets a phone call from that same niece from a few days in the past. Together through their inexplicable connection, they work to solve the case and stop the murder before it happens.

When I first saw that there is a Playmobil: The Movie, my mind immediately jumped to the similarities to The LEGO Movie. Yes, the little figurine characters are similar. But the trailer for Playmobil looks funny enough that kids likely won’t mind the potential copycatting taking place. The plot follows a super-spy and two seemingly ordinary people on a rescue mission. Daniel Radcliffe, Jim Gaffigan, and Anya Taylor-Joy provide the voices.

So our marathon list of August movies comes to a close. As per usual, the month’s biggest blockbuster has my attention. Hobbs & Shaw looks like it has the most ridiculous elements of The Fast & Furious franchise molded into their own movie. But that’s not necessarily a bad thing. My second pick for the month is Ready or Not. I’m not usually a horror guy, but this horror-comedy looks like some creepy fun. It’s The Most Dangerous Game meets an escape room. Plus it has Adam Brody from The O.C. in it. It’s always good to see the artist formerly known as Seth Cohen in a movie. So to summarize, it’s hot out. Go to the movies.

Hypothesis: ‘The Transfiguration’ – Why Must I Be a Vampire in Love?

What is the Best Software to Recover MS Word Files?