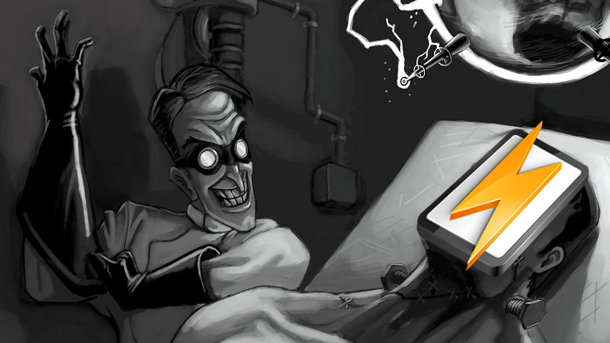 Some of you may recall the eloquent words I recently committed to the topic of Winamp’s sad descent into abandonment; feelings and experiences from years of my childhood, condensed into digestible and informative paragraphs. How silly would I feel if AOL ended up saying “oh, whoops, we’ve changed our minds”? Fairly silly, you might well think. But could that really happen? Hold on to your hats (and the rest of your clothes too–it’s winter); there are twists afoot.

(Credit the lovely art to Joshua Otero aka dark98502 (check out more of his work here), but the terrible Photoshop work to me.)

When the news broke, a lot of people were upset. Winamp had been prominent for a long enough time that just about anyone tech savvy and with experience of Windows computing had used it, and that kind of familiarity breeds protectiveness. In an internet landscape now beset with attempts by collectives to garner influence (campaigns for money, as through Kickstarter, petitions for political movements, as through MoveOn.org, for instance), the possibility of mourners joining together to rage against the decision was always there. It seems fairly obvious in hindsight, but it doesn’t always happen; some brands end up going out with a whimper. Sometimes everyone nods and says “alright, it had a good run.”

Such is not the case with Winamp, we now know. As I write this, this petition on Change.org to keep Winamp around or release its source code freely has 27,237 signatures, and at its current rate it doesn’t seem like it will be long before it hits its target. So people care about it at least enough to sign a petition, and there are several ways this outpouring of support could keep Winamp going.

Some reports filtered out recently suggesting that Microsoft were in talks to acquire Winamp along with Shoutcast, its corresponding streaming service. They stemmed from this Techcrunch article; while it was later updated to note that Microsoft had declined to comment on the matter, such a refusal means very little. If their information is solid, perhaps Microsoft could want Winamp as a recognizable name to slot into their Xbox hub. Their purchase of Skype and its absorption into the Microsoft machine has been very successful, as far as I can tell, so this could be a savvy buy.

Of course, it could just be a marketing move. Having suffered some heavy blows in the wake of the Xbox One marketing catastrophe, Microsoft might just want to bring an act with vaguely positive associations to the attention of the young internet-using demographic that is so important to them and their rivals. Now the petition is out there, they could swoop in like angelic saviors, hoping to be hailed as heroes. With the amount of money they have at their disposal, it wouldn’t be much of a price to pay.

Suppose Microsoft decide against a move for Winamp, and all other possible acquisition deals fall through, with the public outcry ultimately not enough to convince any potential buyers of the brand’s value; the next best thing for avid Winamp users would be for the code and assets to be released in full to the amateur developers of the online community. The existing versions will inevitably be preserved in perpetuity by web hosts looking for some easy traffic regardless of what happens, but just think how cool it would be to have a new team of diligent guardians keeping Winamp up, making it the champion of the people. Perhaps in time it would be better known for being essentially indestructible than it ever might have been for being prodded along for cynical reasons by a large company seeking only exploitation.

This whole situation has been quite heartwarming in some ways. We all know that Winamp is just a program, designed and released–broadly speaking–for financial purposes, and in that regard it is no different from any of its contemporaries. Still, that’s not how we see it, and while Winamp is significant to many people (me included), I have to wonder if it also hints at a larger trend. It takes a long while, but even simple things gather meaning beyond their immediate significance, and we remember when programs have treated us well. In twenty years, will we look back and be defensive of YouTube as it is now? Tell young whippersnappers of how Twitter was better in our day? I quite hope so, really. It’s a nice thought.

Modern Inventions That Tesla and Edison Would Love