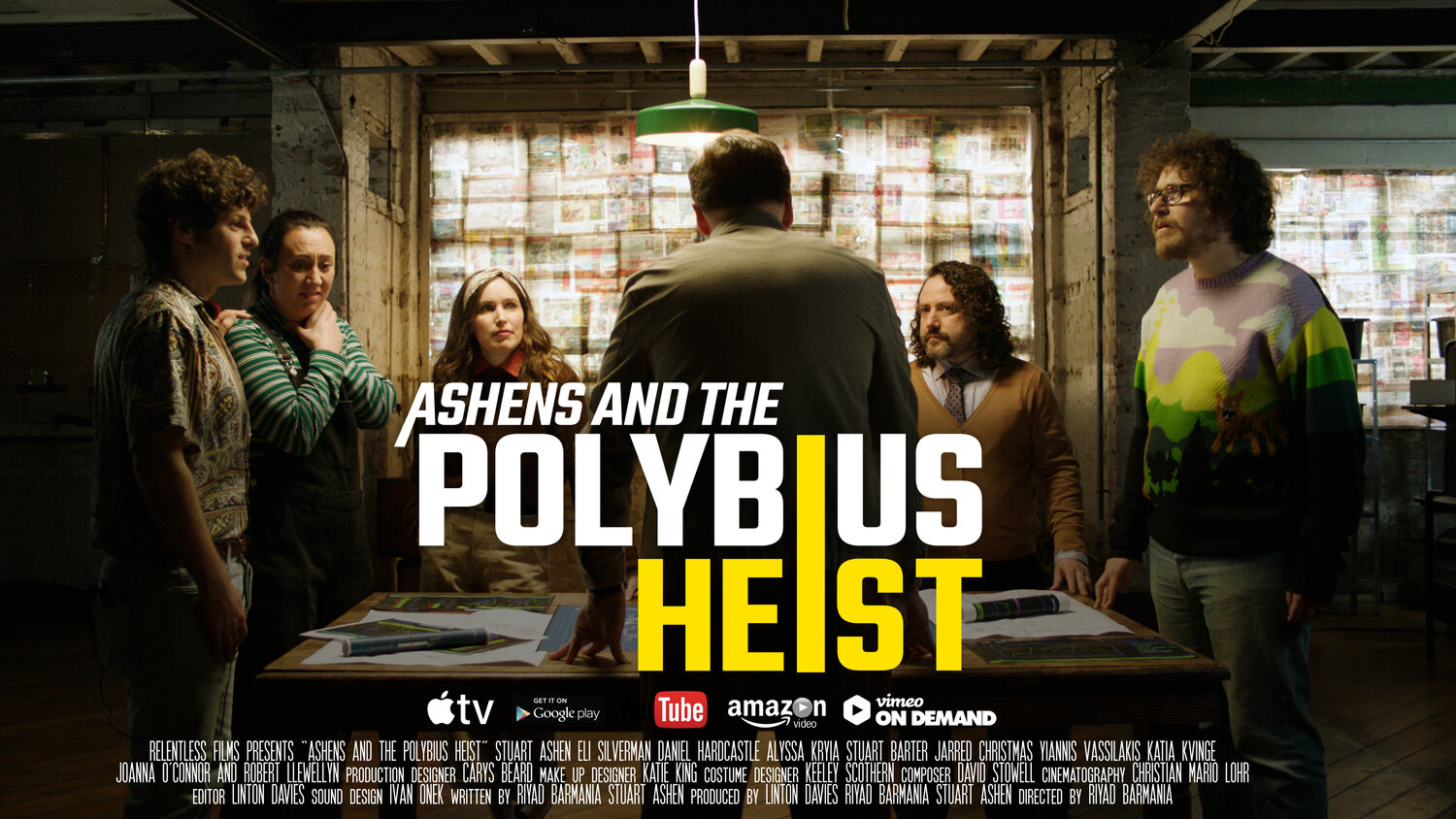 We are excited to announce the forthcoming release of comedy heist film Ashens and the Polybius Heist, a hilarious thrill-ride centered around retrieving an infamous 80’s arcade game that can supposedly control people’s minds.

The first teaser trailer garnered over 130,000 views in just one week, making it onto the YouTube trending page as a result. The film has already sparked an online frenzy and looks set to become one of the talking points of the winter.

Polybius Heist stars some of the most famous people you’ve probably never heard of, with Stuart Ashen featured alongside Sunday Times best-selling author Daniel Hardcastle, and Stuart Barter, amongst many other huge names in the online world.

They join forces with legendary actor Robert Llewellyn (Red Dwarf’s Kryten) and a slew of up and coming comedians to bring together a passion project seven years in the making.

Filmmaking is bloody hard at the best of times, but completing a film this ambitious in the midst of lockdown has been the challenge of a lifetime. It has taken a herculean effort from the whole team to finish off this fun, feel-good story that’s the perfect tonic for the times we’re all living through.

Every gamer and sci-fi fan knows the Polybius legend, with rumors swirling of hallucinations and fatal side effects amongst its players until the game suddenly vanished from arcades in 1981, never to be seen again. Given the myth’s longevity, and the breakout success of 2013’s Ashens and the Quest for the GameChild, it is unsurprising Relentless Films were able to crowdfund £150,000 towards the film’s budget in 2018, demonstrating the huge interest in the project.

“the fans’ passion for this film has been incredible. I’ve never worked on something with so much excitement and support from the audience, I can’t wait to share it with everyone.”

Shot on an Arri Alexa with post-production services from The Farm and Technicolor, Polybius Heist brings a big budget ethos to a home-made story. The film is a veritable love letter to geeks and anyone who has ever felt like an outsider: a film made by nerds, for nerds.

In this episode of Geek Speak, I had the pleasure of sitting with Stuart Ashen, co-writer and actor, and Riyad Barmania, the director of Ashens and the Polybius Heist.

I was eyes-deep in CRYPT WEEK, an #iNDEEvent sponsored through Geek Insider – and, as the name suggests, fully immersed in all things horror, thrillers, and crime. So, when the trailer for Ashens and the Polybius Heist came across my desk with an opportunity to snag an interview and watch the screener, I thought, “Yes, thank you! I could use a laugh and take a break from the dark stuff.”

And laugh I did.

Firstly, the entire cast of Ashens and the Polybius Heist is magic to watch. Their comedic timing, interaction, and overall presence belies an acting troupe who’ve worked together for years. Everyone was fully invested in their character and they owned every kooky, awkward moment to fully embrace the script and invite the viewer into the Heist.

Being a child of the 70s and 80s, I was thrilled to discover little gems that were throwbacks to my younger years; references to movies, toys, and general geekiness that I will not point out because NO SPOILERS ALLOWED.

I would be remiss if I didn’t share something about one of my favorite scenes in the whole film. There is a segment between Jarred Christmas and Joanna O’Connor that will take your breath away; partly because you’ll laugh your ass off and partly because it feels wildly and hysterically inappropriate. I’ll only say that they put the hot in lawn mowers.

I know that doesn’t make any sense! You’ll just have to watch the movie to know what I’m talking about.

Synchronize your watches because Ashens and the Polybius Heist premieres On Demand on November 19, 2020 through Relentless Films. Put it on your watch list right now.