Samsung has unveiled the much awaited Galaxy Note 3 smartphone, and the equally anticipated Galaxy Gear smartwatch. The unveiling took place on the first day of the IFA 2013 event in Berlin. 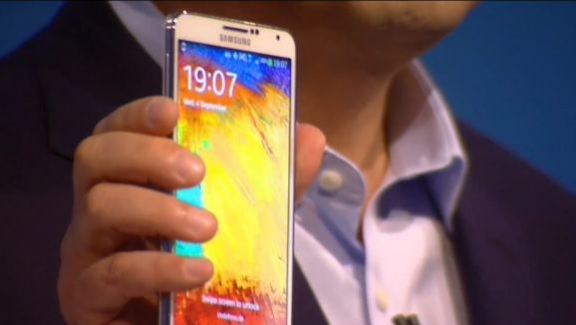 The Galaxy Note 3 is of course, the latest in Samsung’s highly successful Galaxy Note range of phablets (Phone Tablets). It’s grown bigger and faster. The latest Note will be available in 2 variants – an LTE version that will run on quad-core processor, and a 3G variant that will be supported by an octa-core CPU. It also gets a mind-boggling 3 GB of RAM, and will be available in two variants having storage space of 32 GB and 64 GB.

The Note 3 has a larger 5.7 inch screen, backed by a Super AMOLED display along with full HD 1080p resolution. The device is considerably lighter than the Note 2 – weighing 168 grams versus it’s predecessor’s 183 grams.

All this is powered by a 3200mAh battery. The Galaxy Note 3 will be available later this month, running on Android 4.3 Jellybean out of the box.

Samsung also lifted the veil over it’s smartwatch at the event. Called the Galaxy Gear, the device will be available in 6 colors – Jet Black, Mocha Gray, Wild Orange, Oatmeal Beige, Rose Gold, and Lime Green. It will launch worldwide on 25th September.

Powered by an 800 Mhz Exynos processor, the Galaxy Gear has a small 1.63 inch display – super AMOLED like the Galaxy Note 3 – but with a resolution of 320 x 320. The tiny device comes features a built-in camera, a pair of speakers, and a pair of microphones.

The Galaxy Gear will connect to smartphones via the onboard Bluetooth 4.0. Additionally, it also has gyroscope and accelerometer sensors. The RAM on the watch is 512 MB, which should be sufficient for the device. Onboard storage is 4 GB.

The Galaxy Gear will bring with itself a host of apps and features. Find My Device will allow users to locate their smartphones via the Gear, by having the phone vibrate, ring, or light up. The Auto Lock feature will also lock their device’s screen once the Gear moves out of a 1.5 meter range – unlocking it when you step back into the radius.

The battery however, is disappointing. At 315 mAh, it is expected to last only 27 hours on normal usage – way too low for any watch, smart or not. Couple that with a $299 price tag, and this becomes more of a luxury than a must-have.

Study Into Selfies- Pictures of You