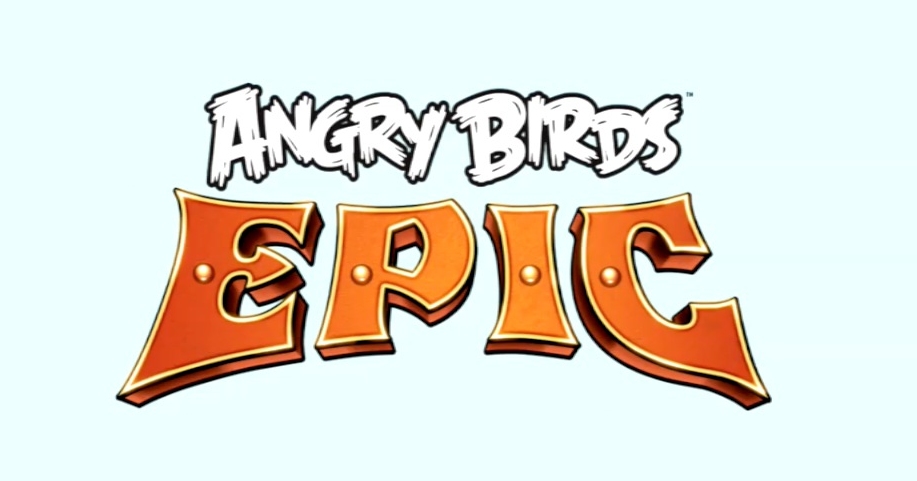 Angry Birds Epic is the latest addition to the Angry Birds franchise, and much like all of the other recent Angry Birds games, this one breaks the mold of “fling bird, knock down building, kill piggy.” This time around, instead of racing or building random contraptions, it’s an epic story of stolen eggs, vile pigs, and heroic… wait. Haven’t we done this before?

This time around, instead of the typical avian projectile based game play, it’s a turn based combat game, something like a JRPG. You can have up to three birds in a single combat, and each of them has their own unique skill sets. It starts out simple enough; the first bird you get is the red bird, which faces off against a single piggy. You tap and hold on the red bird, drag it over the vile swine, and release, at which point it’s his turn to hit you back. After a few repetitions this little piggy goes wee wee wee all the way home, and you’re presented with the mighty roulette wheel of loot. As usual, your performance is graded in stars and based on how quickly you finish the level. This is important because the more stars you get, the more loot you receive. The levels get more and more difficult as you progress, and you have to be more clever about your tactics instead of just rushing headlong into battle against your foes. This, in and of itself, isn’t a bad thing, but the game doesn’t give you a preview of what the fight’s going to be like before you start, so there’s no way to make an intelligent decision on which three birds to use this time around. There are more than one mission that you’ll end up losing simply because you have no idea what you’re up against.

Throughout the game you acquire more and more birds. First the yellow one, who’s your mage, then the white one, who’s your healer, then the black one, your damage dealer, and finally the blue birds, who are your jacks of all trades. As you go through the game you’ll have the opportunity to buy new hats for each of these birds, which, in addition to making them look varying degrees of silly, switches up their skills a bit while still staying on a common theme. For example, the samurai helmet for the red bird changes his single attack into three smaller attacks, and makes his special ability effect all of the active birds in your party for a single turn.

As you proceed, you’ll receive new equipment, experience, crafting materials, and currency. You can buy more currency at any time, of course, and trade it in for the new weapons and upgrades that you would normally have to spend hours and hours trying to get. Case in point, the rarer in game currency, Lucky Coins, either have to be bought outright or won through a once per day event that will only give you 1 coin for each day that you’ve beaten it, up to a maximum of 7. The cheapest non-consumable items that you can get in the store cost 125 Lucky Coins, and things only get more expensive from there.

The currency isn’t exactly cheap if you’re paying real money, either. The cheapest relevant amount of Lucky Coins is $3, and that can’t even buy you an entry level upgrade. To make any progress, you’ll have to drop at least $8, which is way more than this game is worth.

If you’re not too big on the idea of paying real money for virtual currency, you’ll have to grind for the necessary materials to craft the things that you need. This often involves playing the same missions you’ve already beaten over and over and over again until you finally get all the pieces you need. Depending on what exactly you’re lacking, the fights can range from still challenging to repeatedly beating up little piglets for their lunch money. In all reality, you’ll probably tend towards the easier, more boring fights, since they’re faster and you’re guaranteed three stars, which means more crafting materials.

Actually crafting items has a bit of random chance involved. Once you’ve got all the pieces and you’re ready to craft, the game rolls a virtual dice and comes up with between 0 and 3 stars. Each star increases the item’s stats, making it more useful in combat. By buying certain upgrades, you can guarantee you’ll roll a minimum of 1, 2, or even 3 stars each time you craft something, but you can only purchase these upgrades with Lucky Coins, and they are absurdly expensive.

The game also has a Facebook feature, which gives you a variety of benefits, assuming you’re willing to spam your friends walls with notifications or be friends with random people on the net. These benefits range from getting Essences of Friendship, which allow you to re-roll the randomly generated loot, to rolling for a random item on their Golden Pig, to using their birds in the weekly challenge.

Angry Birds Epic isn’t a bad game, as far as Angry Birds games go. It’s pretty repetitive, but really no more than any of the other games in the franchise. Its greatest weakness is the staggering amount of grinding required to get anywhere. By the time you’re even a third of the way through the game you’ll be spending more time grinding than you will moving forward. There’re only so many times you can beat the bacon out of a little piglet before it gets monotonous, which is exactly what you’ll be doing if you don’t want to fork over any money.

Game of Thrones S4 E10 Recap: Crossbows On The Can

The Top 5 Free to Play Games on Steam