Game of Thrones S4 E10 Recap: Crossbows On The Can 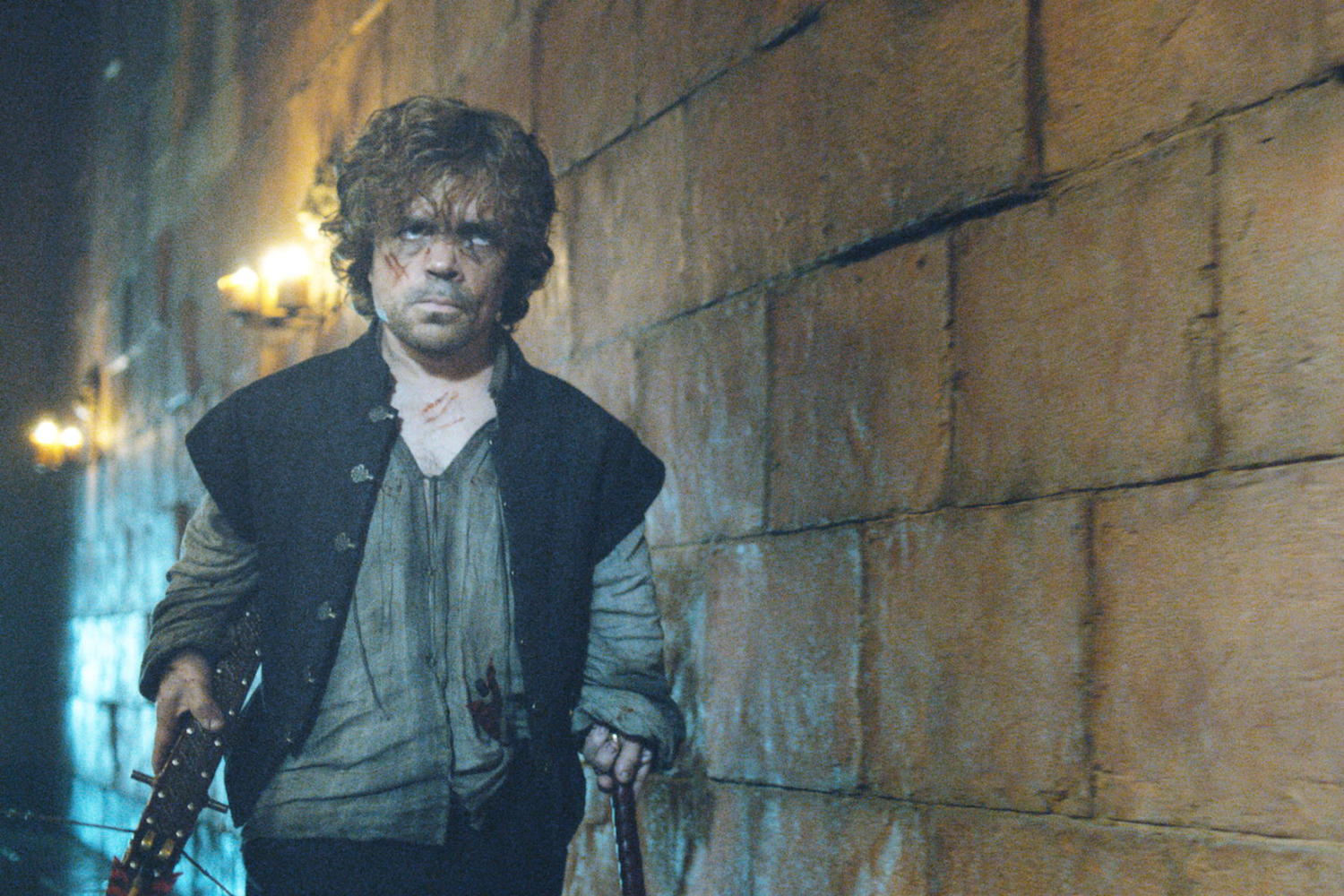 It has taken me longer than usual to write this week’s recap. Firstly, there is the issue of digesting all of what we just saw. Each storyline has been majorly affected in this episode titled “Children.” In the past I’ve been critical of “Game of Thrones” season finales for being a bit of a let down after the tidal waves that hit in the ninth episodes, but not this time. We have to wait the better part of a year for more “Game of Thrones,” but we are left with a really meaty episode to fuel speculation amongst fans until then. Unless of course you have already read the books. In that case, continue your smug grinning as we TV fans confess how much we like the Red Viper or Ygritte or any other doomed character you’ve already mourned over. Here’s our recap.

Snowy Stannis and Children in the Trees

Across the Narrow Sea, we get the most frustrating moment of the episode with our pal Daenerys. She’s still hanging out as the queen in Meereen. First one citizen shows up requesting to be sold back into slavery because he liked his life. She inexplicably allows him to sign a contract with his master for a year. I bet this screws things up in the future. Then a guy comes in with the charred bones of his daughter. Dany’s biggest dragon, Drogon, is the guilty party. She’s obviously upset by it and chains up the other two dragons while she awaits the return of Drogon. It would seem Dany’s long list of titles has collapsed on itself. The breaker of chains and mother of dragons has been forced to put her dragons in chains.

In the North we get a few huge developments. In the wake of the Battle of Castle Black, Jon heads out to try and kill Mance Raydor. After some small talk when he arrives at the wildling camp, Mance tells Jon about why they’re trying to get through the Wall in the first place. It’s the impending doom at the hands of those annoying White Walkers. Before Jon gets the chance to kill Mance (or get himself killed) a horn blasts.

An army is circling the camp, but we can’t quite see their flags. Well let’s do some process of elimination. Robb Stark is dead, Renly is dead and the Lannisters are in the bathroom (we’ll get to that later). So who is left? Good ol’ Stannis and his flaming heart stag sigil have gone north. Mance surrenders but refuses to kneel. Stannis isn’t happy about this, but Jon reveals himself to Stannis as Ned’s son and convinces the would-be king to take Mance prisoner instead of executing him. I always love when storylines criss-cross and this is one of the most extreme examples we’ve seen so far on “Game of Thrones.” Back at the Wall, the Night’s Watch burn their dead with Stannis and company looking on. Jon visits the captive Tormund who tells him to burn Ygritte’s body north of the Wall. He does.

Even further north, the storyline time forgot finally makes some progress. Bran and his gang arrive at the Heart Tree Jojen saw in his vision. But Jojen isn’t doing so hot. As they get close to the tree a bunch of wights emerge from the ground and cause some havoc. Despite Meera’s efforts, Jojen is killed. I’m a bit saddened by this because I think Thomas Sangster, who plays Jojen, was great in his limited role on the show. But beyond that, Bran possesses Hodor and kills a bunch of bad guys. Even so, they still appear to be on the verge of defeat when a child of the forest saves them. That’s right. We finally get to see what a child of the forest looks like. For some reason I pictured them like the grungees from “The Jetsons Movie.” That is not what they look like. Anyway, Bran, Hodor and Meera get into the tree and would you believe it, the three-eyed raven is there. But the three-eyed raven is actually an old guy living in the tree. He tells the group that Jojen knew he would die and came this far anyway. Then there’s the kicker. He says Bran won’t walk again, but he will fly. What does that mean? I have no idea!

In the never stressful locale of King’s Landing, nothing happens. Yeah right! The Mountain, not quite dead from the poisoned spear of Prince Oberyn, is being treated by Qyburn, the former maester. Grand Maester Pycelle says it’s a lost cause, but Qyburn has some shady methods. He tells Cersei that he can save the Mountain. Cersei goes on to tell her father that she won’t marry Loras. That’s an argument we’ve heard before. She then tells Tywin that the rumors are true. Her three children were born of incest with Jaime. Tywin doesn’t want to believe her. Later Cersei tells Jaime she loves him, blah, blah, blah.

Tyrion, rotting away before his impending execution, is visited and freed by Jaimee. They say a quick goodbye in the dungeon. Jaime tells Tyrion that Varys is waiting in the wings, but Tyrion takes a detour. He emerges in the tower of the Hand. Tywin isn’t in his bed, but Shae is. Well shucks. They fight and he strangles her to death. With a crossbow that was hanging on the wall, he seeks out his father. He finds him sitting on the toilet. What follows is the most intense bathroom scene I have ever seen in my life. Tyrion, in a rare position of power, warns his father about using the word “whore” when referring to Shae. Tywin keeps trying to bring the conversation out of the privy, since he considers himself to be an honorable dude. But when he lets the “w” word slip once more Tyrion fires an arrow into his chest. A minute later, he fires a second. The legendary Tywin Lannister, who has survived wars, battles and multiple different kings, is killed by his own son while sitting on the toilet.

Tyrion meets up with Varys, who smuggles the convict to a ship in a crate. When out in the harbor, the bells ring signaling Tywin’s death. Varys decides to board the ship as well. The dynamic duo of outcasts, the eunuch and the imp, are off to Essos. 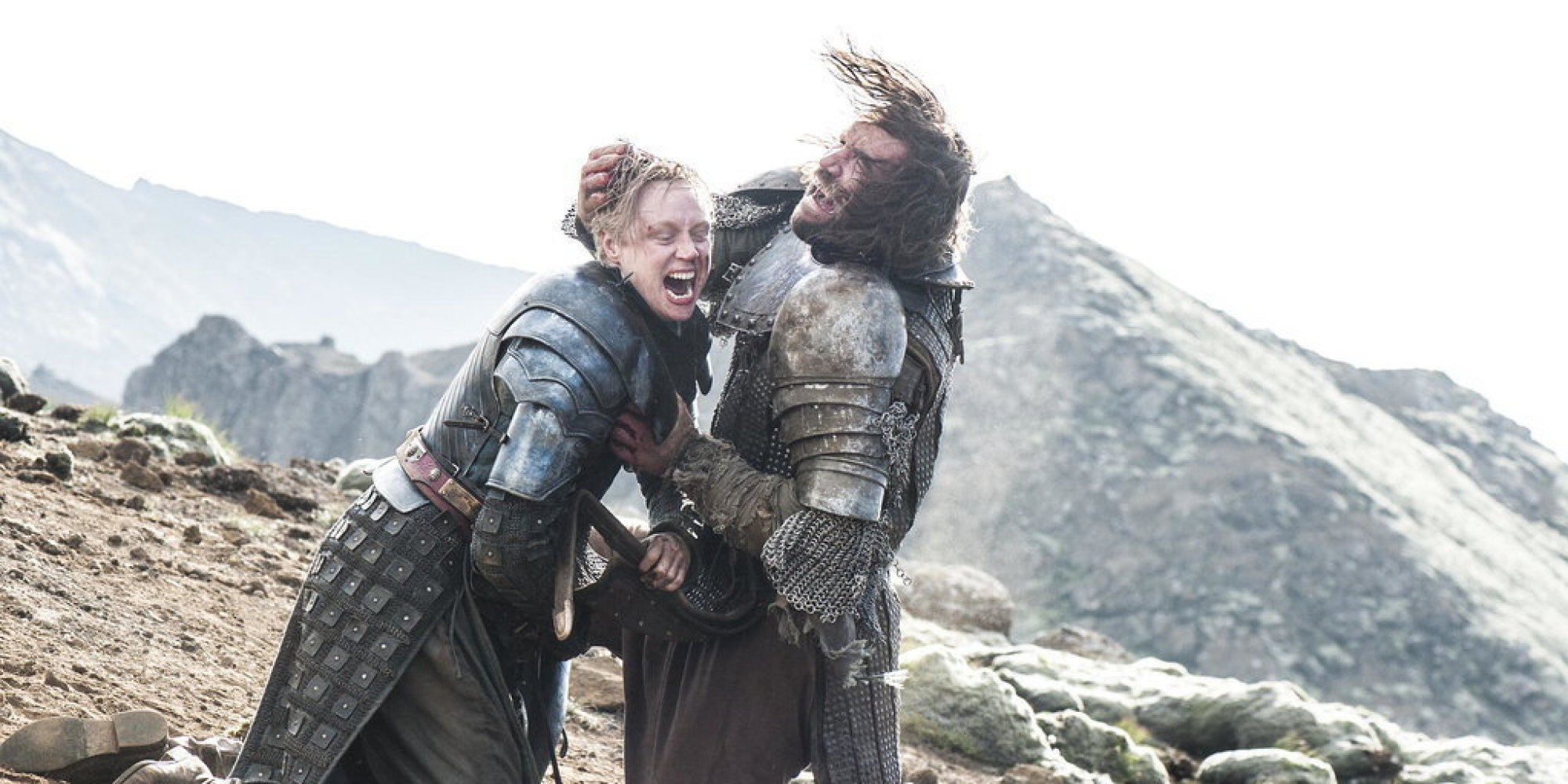 Wandering through the Vale we get another pair of storylines overlapping. Brienne and Podrick come across Arya and the Hound on their way to the Eyrie. Pod recognizes the Hound and Brienne connects the dots on who Arya is. Immediately I begin to get excited about the possibilities of these four continuing the story together. But that’s short lived. Brienne tells them about her oath to Catelyn, but the Hound recognizes Lannister gold on her sword and they brawl! I definitely underestimated Brienne in this case as the battle is one of the best instances of one on one combat we’ve seen on “Game of Thrones.” Eventually Brienne knocks the Hound off of a cliff and is victorious. Arya, hiding from Brienne, goes to the Hound. He has a seriously broken leg and is in bad shape. He asks her to kill him, but she won’t. She just gives him a cold stare. She takes his money and leaves him there to die? You never know on this show. Arya rides to a nearby village and asks the captain to take her with him to Braavos. He’s reluctant until she reveals the coin given to her by Jaqen H’gar. “Valar Morghulis!” And they set sail for Braavos.

So now what can we make of this explosive “Game of Thrones” finale? Well, I can tell you I think it may be the most exciting episode we’ve seen in four full seasons. I also think they should have spread some of this out amongst the slower episodes earlier in the season. But how can I complain about such an awesome ten weeks. From Prince Oberyn’s grand introductory speech to the sad death of poor innocent Joffrey (!) all the way through the epic clash at the Wall and Tyrion’s revenge, there is no shortage of memorable moments from “Game of Thrones” 4.0. I appreciate your reading these recaps each week. It has been a whole lot of fun writing them. I’d love to leave you with a “Game of Thrones” quote, but I’m not quite sure which one is most appropriate. Valar Morghulis, You know nothing Jon Snow, Hodor!!” Those seem appropriate. Until next year!