When you brush your teeth in the morning what type of material is your toothbrush? Chances are it is plastic. The comb you use in your hair is plastic, the lid on your to-go cup is plastic, and the material used to protect the underside of your car engine from damage is plastic. We often forget just how many of the materials we encounter throughout our day are made of plastic. Only in the past decade has recycling become common practice on a massive, worldwide scale. Corporations, small businesses, apartment complexes, and maybe even you yourself have adopted the practice of recycling. Unfortunately, this is not even close to enough. The plastic that is not recycled has to go somewhere and, regrettably, it often ends up in the ocean.

This past year I decided to dedicate a portion of my time and spare income towards projects or innovations that will make the world better. I was enthralled when I learned of something called The Ocean Cleanup.

The Ocean Cleanup is a non-profit company that is determined, willing, and able to save our oceans from the plastics that plague them. The plastic contained in the ocean often becomes entrapped in gyres or the ocean currents that break up the plastic into microplastics. These micro sized pieces are small enough that sea life often mistakes them for food. This has an impact on the environment, the economy, and the health of all life. The system developed to combat this is completely autonomous using algorithms to determine the most effective locations to deploy each system. The systems themselves are energy-efficient in that they use the flow of the gyres to support movement and any electrical equipment employed is powered by solar energy. Additionally, the real-time telemetry allows scientists to monitor the system continuously, tracking its movements, trajectory, as well as how much debris it has collected and what condition the system is in. 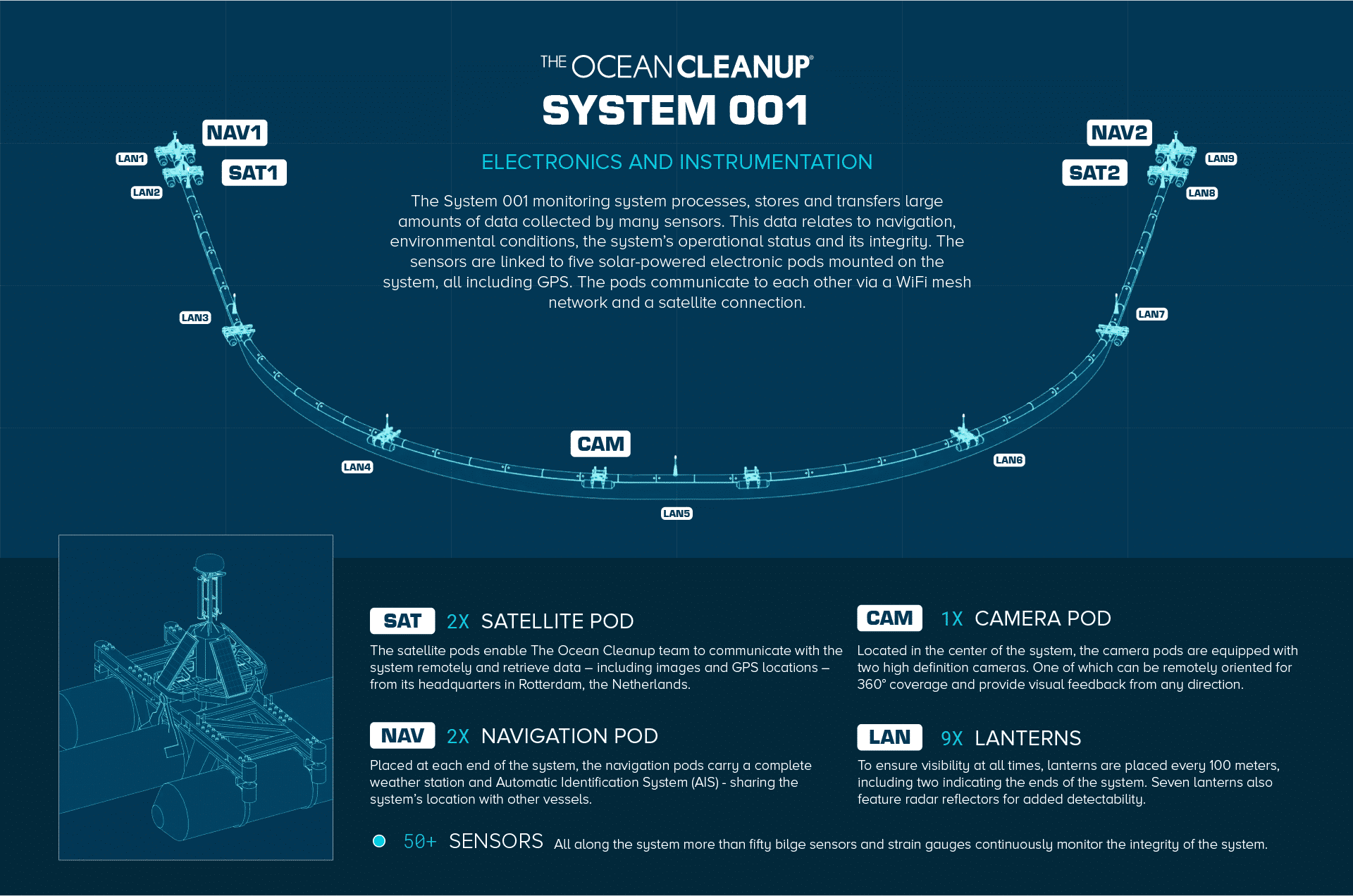 The system is essentially a floating trash bin in that it sits just at the surface of the water floating in a U-shaped alignment. It has a buoyant floater that hovers above the surface to trap plastics from going over the barrier and a 3-meter-deep skirt attachment to trap plastics from going underneath. The 600-meter-long system is capable of surviving in tempestuous circumstances while still collecting debris. Meaning that wherever there is ocean and a current this system can be deployed effectively. The project began in 2013 and has since gained a lot of traction through social media, news outlets, and has garnered nearly all its funds through crowdsourcing. That’s right, this idea that bloomed in the mind of 16-year-old boy whilst scuba diving has come to fruition almost entirely by people like you and me donating time, money, and expertise.

Over the past few years the growth and progress of the project has reached new heights. This past May the project launched its first deployment of the system in the Great Pacific Garbage Patch. The project has surpassed numerous tests and prototypes to best fit the location of the deployment. By 2020 they expect to have eradicated 50% of the Great Pacific Garbage Patch debris. Throughout the rest of this year The Ocean Cleanup will be deploying numerous other systems throughout the Pacific Ocean and by 2020 will have scaled it globally to include the other four major gyres and garbage patches, adding up to around 60 systems in total. Based on the current data and collection rates, it is estimated that with the use of this system, 90% of all ocean debris will be fully eradicated by 2040.

Do You Want to Help?

The project has garnered massive attention and, despite its humble beginnings, has grown in recognition earning the United Nations Champion of the Earth award in 2015, Time’s The 25 Best Inventions of 2015, Entrepreneur Magazine’s Entrepreneur’s Brilliant 100 in 2016, while also being endorsed by the Government of the Netherlands as well as companies like Microsoft. At present, the project is in need of funds to move from the pilot phase to the scale-up phase since it’s 2018 launch. This project was built off the dollars of people like you and me, and will most likely continue to rely heavily on those donations. You can Fund the Project here, or, if you would rather donate your time or expertise here is a list of Volunteer & Job Opportunities. Afterwards, Follow the Progress of The Ocean Cleanup and see the impact you had on their success.

As if the project wasn’t already a work of majesty, the debris collected from the system is recycled to create high quality products, much like that toothbrush I mentioned earlier. As inhabitants of this Earth it is our responsibility to take care of what we have, we created the problem and now we can create the solution. Our hands are tools that can both harm and heal. Be the change you wish to see in the world.