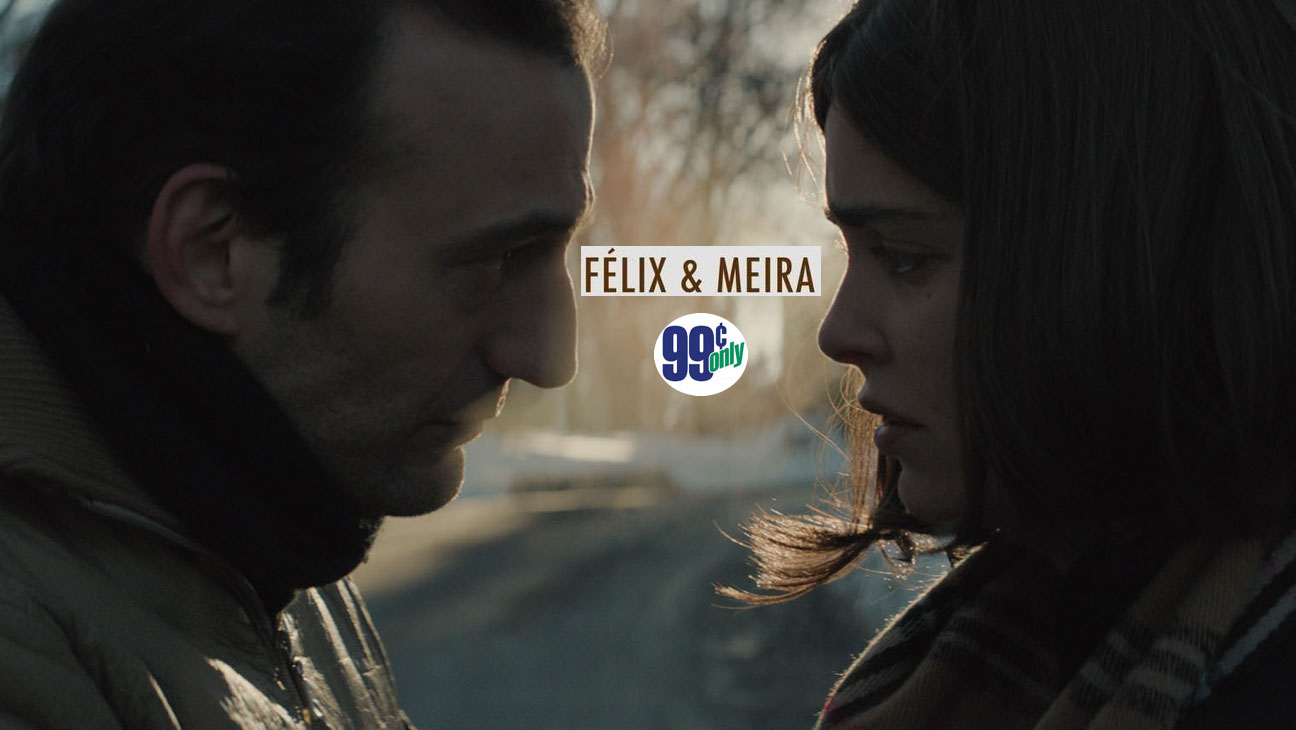 NOTE TO READERS: The featured iTunes $0.99 rental this week is the 2015 animated film Home. While that film looks warm and fuzzy and altogether adorable, I had zero desire to watch it this week. Luckily, the kind folks at iTunes always offer up a little seen indie for the same low price. So …

This week, iTunes goes looking for cross-cultural love in all the right places with Félix & Meira.

Unfolding on the frosted streets of Montreal’s Mile End, Félix & Meira follows a burgeoning romance between two people who live in the same neighborhood, but exist in different worlds. A free spirit suffocating under the stringent doctrine of Hasidic Judaism, Meira (Hadas Yaron) first appears in full obedience hosting a dinner for neighborhood friends. As her husband Shulem (Luzer Twersky) elegantly serenades diners with a Yiddish prayer, a sly smile passes over Meira’s lips. In a story rife with restraint, this understated moment is our first glimpse of the emotional tug-of-war waging behind Meira’s alluring eyes. Our instincts are confirmed when Meira is discovered playing soul music (strictly forbidden) by her husband. When Shulem attempts to reprimand her, she falls to the ground and plays dead.

Meira first encounters Félix (Martin Dubreuil) in a neighborhood bakery. Forty-years-old and mourning the death of his estranged father, Félix is the eternal drifter coming to terms with the idea of laying anchor. Spotting Meira as she sketches in a notebook, he brashly approaches the beautiful young mother. Stunned at the charming stranger’s boldness, Meira rushes out of the bakery without a word. The anti-romantic moment tactfully sets the tone for the romance that follows. Her desired freedom reflected in the charming, persistent Félix, clandestine meetings lead to tiny affections that swirl slowly into grand emotions. As romantic fires swell, life-altering decisions must be made. Subtle, patient, and utterly engrossing, Félix & Meira is that rare romantic film where sparks are allowed to simmer long enough for the fire to take hold. 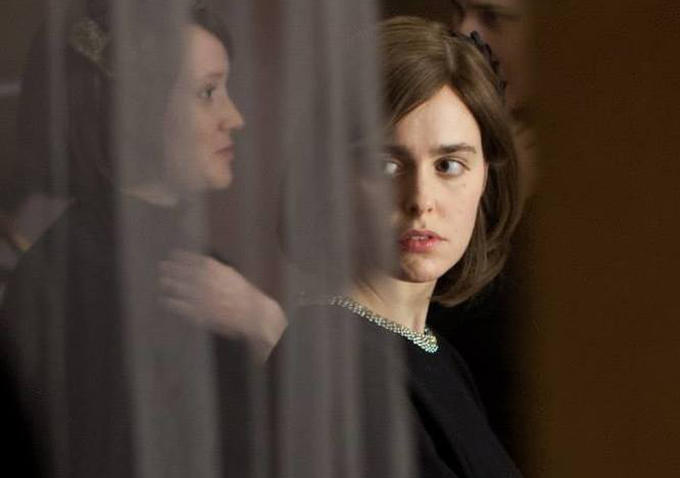 Subtlety is not something romantic films are willing to explore these days. Keeping his screenplay focused on things unsaid, Writer/Director Maxime Giroux takes the subtle approach to daring new heights. Looks say more than words in Félix & Meira‘s quieter moments as Giroux builds his captivating narrative around intriguing moral quandaries. Culture clash is front and center as Meira attempts to shed years of habitual obedience. Simple acts like making illicit eye contact with Félix evolve to deeply nuanced moments purely by way of circumstance. Through Meira’s particular circumstance, Giroux trumps modern romance by leaving sex out of the equation. Simply touching is onus enough. As Félix and Meira’s individual compulsions meld into a singular desire, sex is the least of their worries. To that effect, Giroux cleverly builds the films most overtly sexual moment not around the removal of clothing, but in the addition when Meira models a modern look for her amorous companion. It’s such a simple moment that you almost overlook its dramatic implications of Meira transforming from reticent girl to confident woman. It’s likely the first time in her life that she’s ever felt sexy. The soul-baring moment is not lost on Félix who responds with a simple, honeyed “wow.” In Giroux & Co.’s capable hands, emotional nudity becomes far more tantalizing than actual nudity.

Every moment of unaffected beauty is captured by Cinematographer Sara Mishara. Working almost exclusively with natural light, Mishara shifts Meira’s world out of the shadowy earth tones of Hasidic life to bright lights and expressive colors when she’s with Félix. A new life is within reach and Meira is seeing the world for the first time. The sumptuous colors shift, effectively expanding her emotional awakening beyond the realm of words or actions and adding a lavish layer of emotion in the process.

Félix & Meira‘s deep well of pathos is anchored by Hadas Yaron in one of the year’s finest performances. Exquisitely conveying Meira’s whirlwind of emotions with little dialogue, Yaron portrays a wide range of feeling in her wildly expressive eyes. Giroux often lets his camera linger luxuriously on Yaron’s face. The capable actress tells Meira’s story with a curl of the lips or a twink of the eye. For all of the performance’s understatement, Yaron displays a natural sense of character and never flinches at showing Meira’s wit, strength, or weakness. Matching Yaron through every moment are her leading men, Dubreuil and Twersky. For his part, Dubreuil infuses Félix with a near tragic sense of affability. Insecure in his age and station, Debreuil’s Félix toes a fine line between charm and desperation. But Dubreuil never tips his hat too far in one direction and wisely lets Yaron lead Félix & Meira into and out of its many emotional grey areas.

It’s Twersky’s Shulem who is largely responsible for those grey areas. Tyrannical in his obedience to the Hasidic community, Shulem might easily have fallen the way of petty villain. But Twersky never steps too far into the darkness and always manages a degree of warmth in Shulem’s actions. Yes, he’s overbearing in his devoutness, but he’s also a devoted husband to Meira … he simply cannot understand her. In the film’s fading moments, Twersky finally confronts his rival and elegantly bares his soul. It’s Shulem’s great tragedy that the moment may come too late and with the wrong person. This unexpected moment lifts Félix & Meira‘s ambiguous tale of bittersweet romantic rescue above romance and cements it as the most human film of the year.

You bet. Featuring loving, uncommonly subdued performances and a subversively simple narrative, Félix & Meira is not to be missed. Transcending modern romance, Félix & Meira uncovers powerful emotions in its muted fervor and delivers the year’s most passionate love affair in the process.