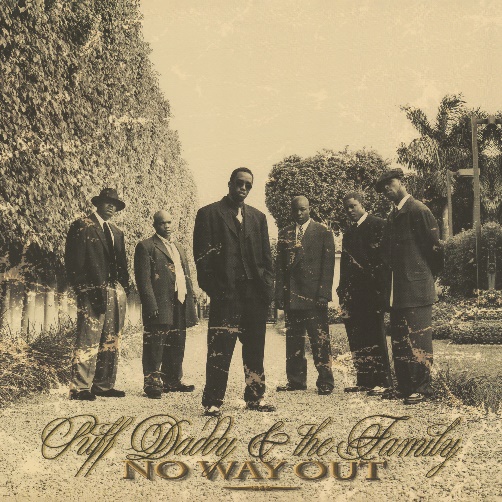 The 25th Anniversary Of Original Release Date In 1997,

The Iconic Music Videos From The Album Will Also Be Remastered

This Year, Starting Today With “Can’t Nobody Hold Me Down”

July 21, 2022, LOS ANGELES – Music mogul, artist, and producer Sean “Diddy” Combs is celebrating the 25th anniversary of his multi-platinum, Grammy®-winning debut, No Way Out, with a new digital deluxe edition of the album, a colored-vinyl reissue, and upgraded music videos.

NO WAY OUT (EXPANDED ANNIVERSARY EDITION) arrives this Friday, July 22, which is 25 years to the day of the original release date, on all digital and streaming services and features the original album along with 15 rare tracks, including remixes, radio mixes, and instrumentals.

Also, a 2-LP version of No Way Out on white vinyl is available to pre-order for $39.98. Due out on November 4 to kick off Hip Hop History Month, it will be the first time the album is available on vinyl since it was originally released in 1997.

In addition, the iconic music videos from No Way Out are also being remastered. The first – for the #1 smash “Can’t Nobody Hold Me Down” – is available now to watch HERE. It will be followed later this year by upgraded versions of “Been Around The World,” “All About The Benjamins” (Remix), “All About The Benjamins (Rock Remix),” and “Victory.”

No Way Out by Puff Daddy and The Family debuted at #1 on the Billboard 200 after its release on July 22, 1997. It went on to earn 7x Platinum certification by the RIAA and win the Grammy® Award for Best Rap Album. The songs feature Diddy’s Bad Boy labelmates like The Notorious B.I.G., Mase, The Lox and other hip-hop heavyweights, including Jay-Z, Lil’ Kim, and Busta Rhymes.

No Way Out produced several Billboard Hot 100 singles, including the international chart-topping Biggie Smalls tribute, “I’ll Be Missing You,” which held the top spot for 11 consecutive weeks and has the distinction of being the first-ever rap song to debut at #1 on the Hot 100 chart. The track also won the Grammy® Award for Best Rap Performance by a Duo or Group.

No Way Out was initially conceived as an ode to Harlem and a nod to the mob narratives of Martin Scorsese and Mario Puzzo. However, Diddy changed course following the death of his friend and fellow Bad Boy artist Biggie Smalls. He assembled a powerhouse production team of rotating talent known collectively as “The Hitmen” and relocated to Trinidad, where they spent weeks expanding on the project. The result was one of Diddy’s most successful and highest-grossing albums to date.

Since then, Diddy’s influence and empire have only grown. Today, he is one of the top-selling artists in music history and one of the most accomplished producers of all time.  In May, he announced he would launch Love Records, a new R&B label that will release singles and collaborative projects from a collective of world-class artists, producers and songwriters. Earlier this month, he dropped his new hit single “Gotta Move On,” featuring Bryson Tiller and this week, he dropped the video directed by Teyana “Spike Tey” Taylor. The new single marked the music mogul’s official return to music. Watch the video to “Gotta Move On” HERE. Now available across all major music platforms, link HERE, is the first to be released from Diddy’s highly anticipated new album under the newly established LOVE RECORDS imprint, in partnership with Motown Records.

NO WAY OUT: DIGITAL DELUXE EDITION

3.   “Been Around The World” (featuring The Notorious B.I.G. and Mase)

6.   “If I Should Die Tonight” (Interlude) (featuring Carl Thomas)

12. “Is This The End?” (featuring Carl Thomas, Ginuwine, and Twista)

19. “Been Around the World” (Instrumental)

21. “It’s All About the Benjamins” (Gangsta Mental Mix)

2.    “If I Should Die Tonight” (Interlude) (featuring Carl Thomas)

Bad Boy Entertainment is the award-winning, globally-celebrated music, media and entertainment company founded by Sean “Diddy” Combs, aka Puff Daddy. Bad Boy was a hip-hop pioneer and, for more than 25 years, has been one of the music industry’s premiere production, distribution, publicity, promotions and marketing companies. Bad Boy helped to launch the careers of Hip-Hop and R&B heavyweights like Puff Daddy, Notorious B.I.G., Craig Mack, Ma$e, Faith Evans, 112, Mario Winans, Dream, Black Rob, The Lox, New Edition, Danity Kane, Carl Thomas, Yung Joc, Total, Cassie and dozens of others. Today, Bad Boy has an exclusive joint venture label partnership with Epic Records, a division of Sony Music Entertainment; artist includes record deals with Puff Daddy, French Montana and King Combs. Other current Bad Boy artists such as Cassie and MGK remain at Interscope under the Bad Boy Imprint. And the Bad Boy catalog, together with Bad Boy/Atlantic artist Janelle Monae, stay with Warner Music Group as per the prior venture agreement between WMG and Bad Boy. Parts of the Bad Boy catalog are also administered through Rhino.