10 Times ‘After Life’ Taught Us About Hope 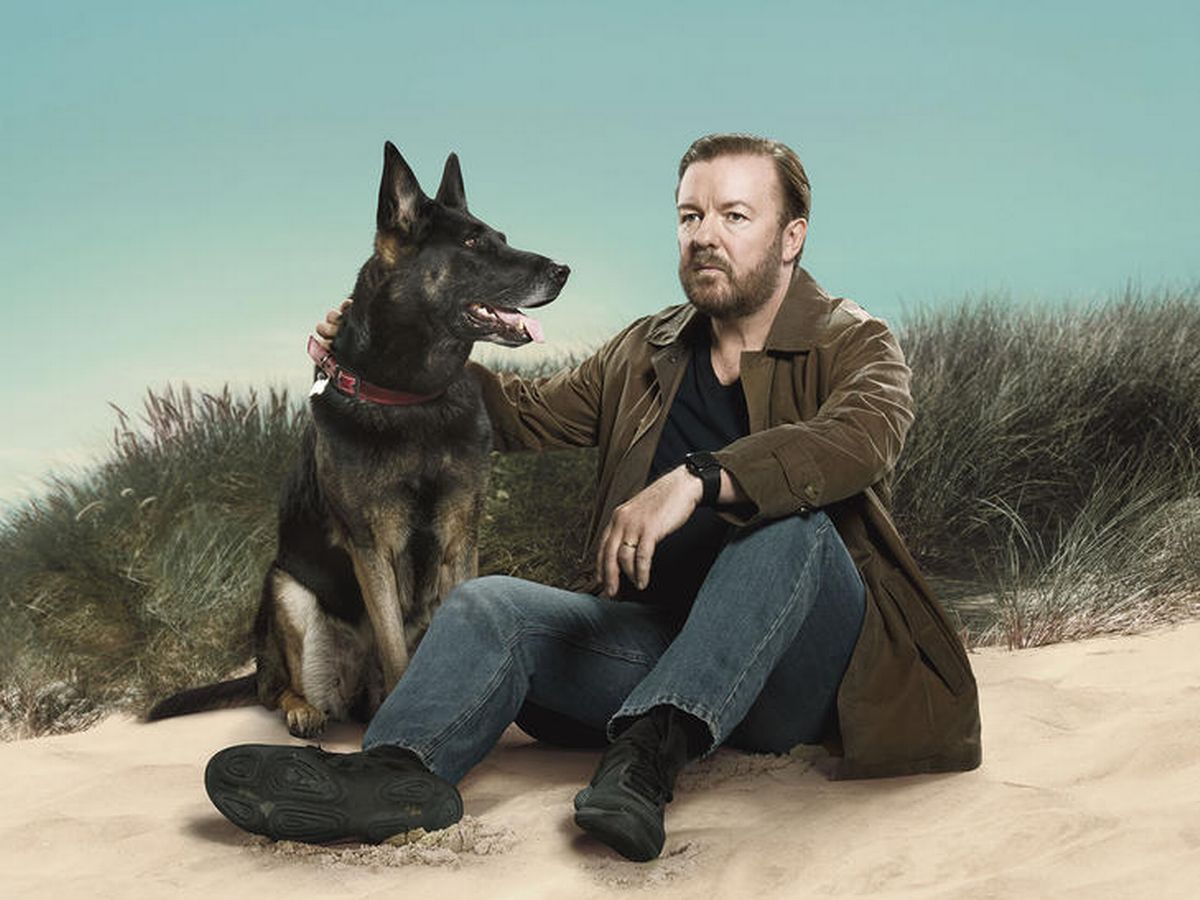 Returning to our screens with little or no kerfuffle (as Karl Pilkington would say) Gervais’ new vehicle After Life deals with the fallout of grief. After the death of his wife through breast cancer, Tony has nothing to lose but his life. And gladly would, were it not for his gorgeous dog.

So! What to do when you’ve lost the will to live but are still drawing breath? Settle yourself with being a total dick to everyone around you of course. We have all met one. But is this sustainable?

The show explores the fragility and fierceness of hope. That valuable currency that keeps you alive when all seems lost. Gervais’ self-professed hatred of mankind is delivered in spades—but so is his joy for the good in the world. The milk of human kindness flows with the wretchedness of living. Understanding that everyone is dealing with different stuff—some good, some bad. Yet how we treat each other can make all the difference.

In honour of this, handpicked just for you (yes you lovely human!) are 10 ways that After Life taught us about hope and the absence of it. 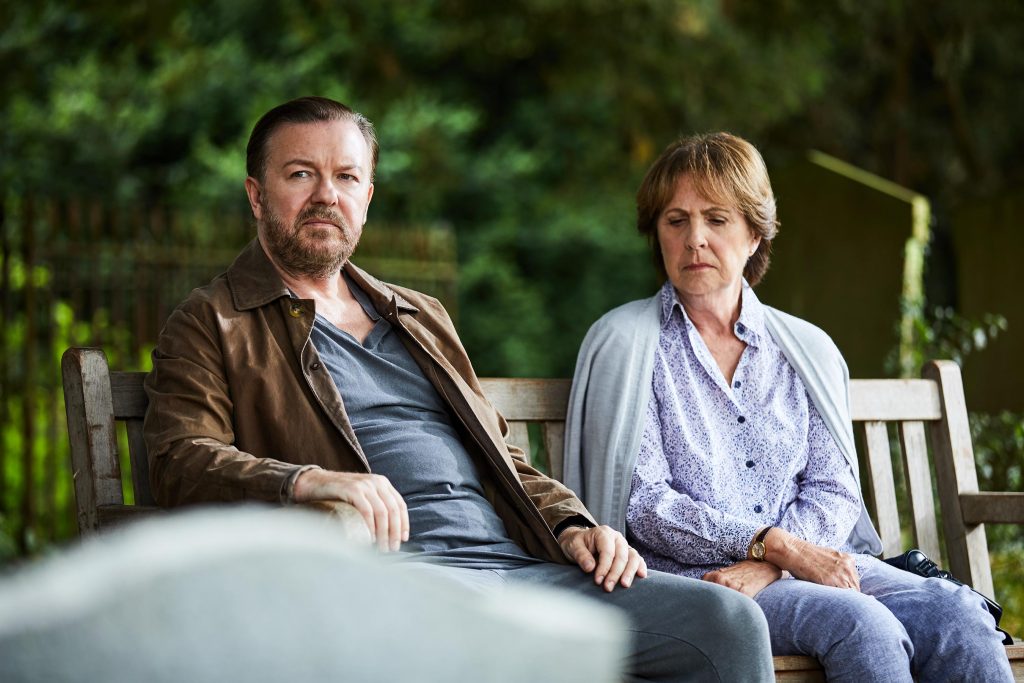 Early on Tony meets Anne (Penelope Wilton) in the graveyard visiting deceased husband Stan. Throughout the season he and this older lady sit together discussing their lives. Her openness and unflappability is a tonic. Tony is disenfranchised, yet she cuts through his crap to the meat of the issue.

“It’s not just about you”

She helps him realise the error of his ways through an outsiders influence. Sometimes it is these little random relationships we strike up that make us better people. Being more open to others is sometimes what can turn a bad day around. Even if you feel like hiding away, little social interactions can make the world feel renewed. The headliner quote comes directly from Anne herself, sparking Tony to realise when Lisa died, so did a part of his character. To live peaceably, he needs to get this back. 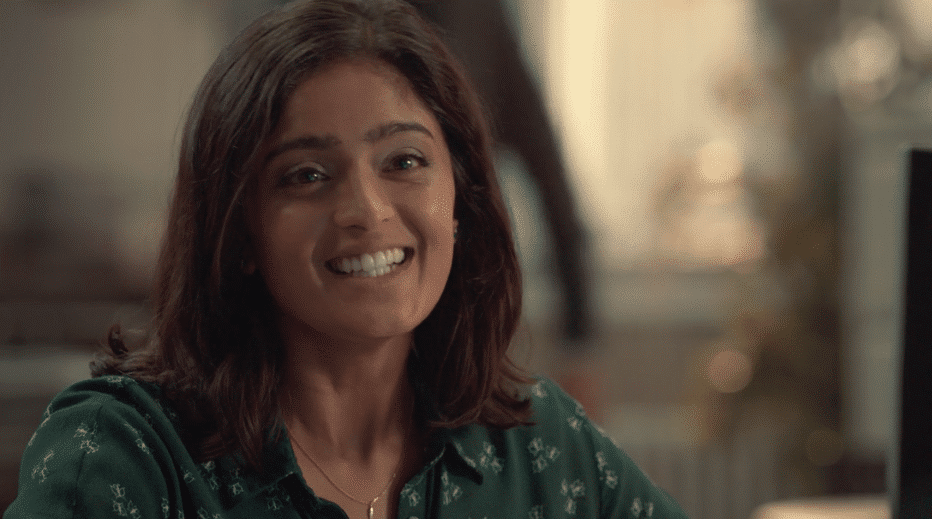 We need to celebrate the precious people who see past outward pain to the good person beneath. Gazette Intern Sandy would be forgiven for thinking Tony a nasty person. His outbursts and negativity can tarnish the atmosphere at times. Instead, she pleads with him to be happy, telling him he is a good person. His response, “see, that’s why I don’t like children. Because they are too snotty and pathetic,” is a sweet moment. Made sweeter by the very British rejection of a compliment.

We Have so Much in Common

As gentle heart-tugging comedies go, this one really throws a dark curveball at the audience. Bonding with a heroin addict isn’t the everyday TV occurrence. Recreationally smoking heroine certainly isn’t. And this doesn’t happen just once! The bond struck between Julian and Tony causes the latter to repeat “I can’t believe we have so much in common.” Julian’s refusal to accept this comment leads him to reason that they are not alike. Tony still has hope. Julian’s treatment as a junkie, coupled with personal tragedy, lead him to believe there is no hope for him. When he is found dead of an overdose, we are left feeling bereft. But he has been released. It is a dangerous line to tread, but one that openly explores the extremities of feeling completely devoid of hope.

The show is laden with little wry moments; people taking pleasure in the small happenstances of life. Tony’s job as a journalist for the Tambury Gazette brings him to realise how these moments matter. When he covers the story of an old man who receives five (count em!) of the same birthday card, his response is lacklustre. Yet this little exchange peeks at a man’s life after his wife has died. Something they have in common. Sometimes these small moments are all we have to cling on to.

I Just Don’t Need You 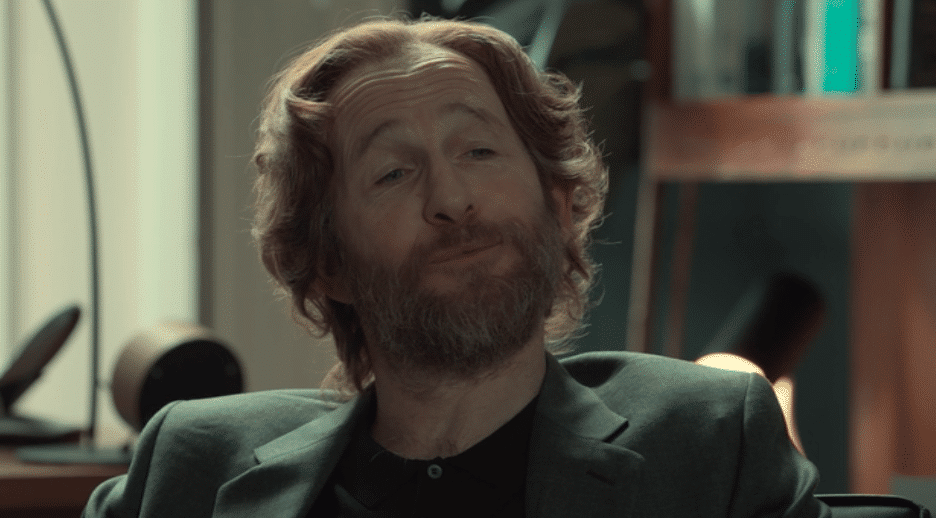 A glib and self-obsessed therapist is proof (if proof were needed) that there are some utter dicks out there. And they’re not worth your time. He has moments of clarity with Tony, berating him for his “shit attitude.” No one can deny that! But when frustrated he blurts, “I just don’t want to be depressed anymore,” the therapists response is simple:

The moment is reductive, and the guy is an awful prick, but he does crack the core of the thing. A lot of life’s outcomes are in our thoughts and approach. He also nails it when noting that asking questions is the right path to solving problems. Tony’s revelation in the final episode is to turn his power of being an asshole on those deserving. The barrage of cuss-laden insults levelled at the therapist is more than satisfying. I’d wager many people have had fantasies of such tirades. It is his realisation that he can avoid such poisonous folk, however, that really hits your heart. 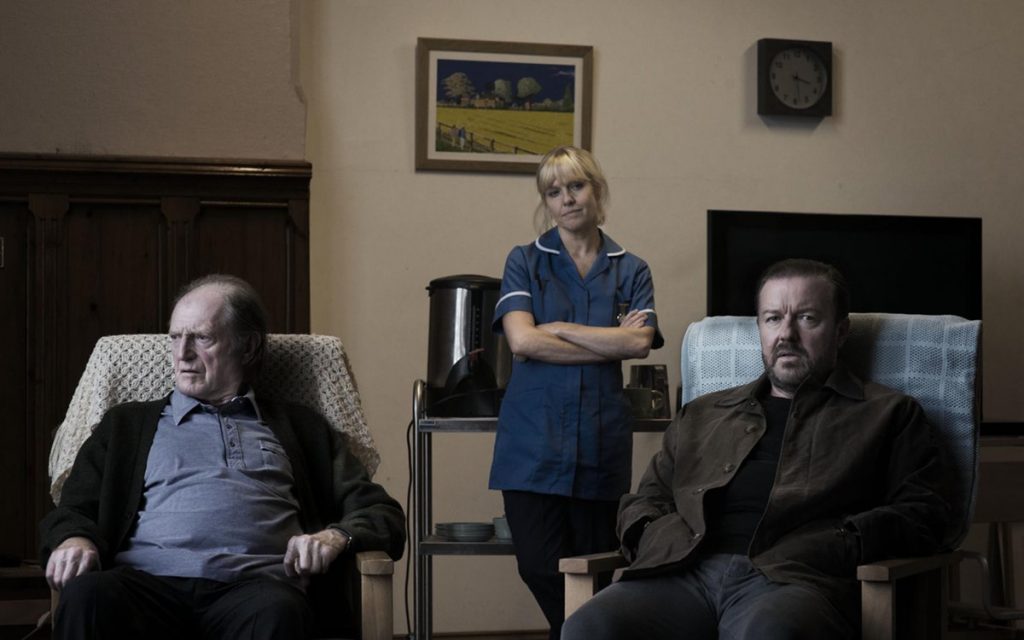 Visits with his senile dad are often slightly tense. Tony vilifies his forgetfulness, making his visits short and infrequent. The nurse, and later object of his affections, is candid about Tony’s behaviour. Suggesting it is possible it’s because he is just a bit of a “c**t.” As he begins to onboard this kind of constructive criticism, and humour his father, little memories come back.

Recognising his son, and divulging a memory of him as a kid, is a heart-warming moment. Made all the more ‘Gervais’ by the final exchange:

When the little moments of joy shine through in shared memory, it makes the pain recede. Putting up with everything else is worthwhile. 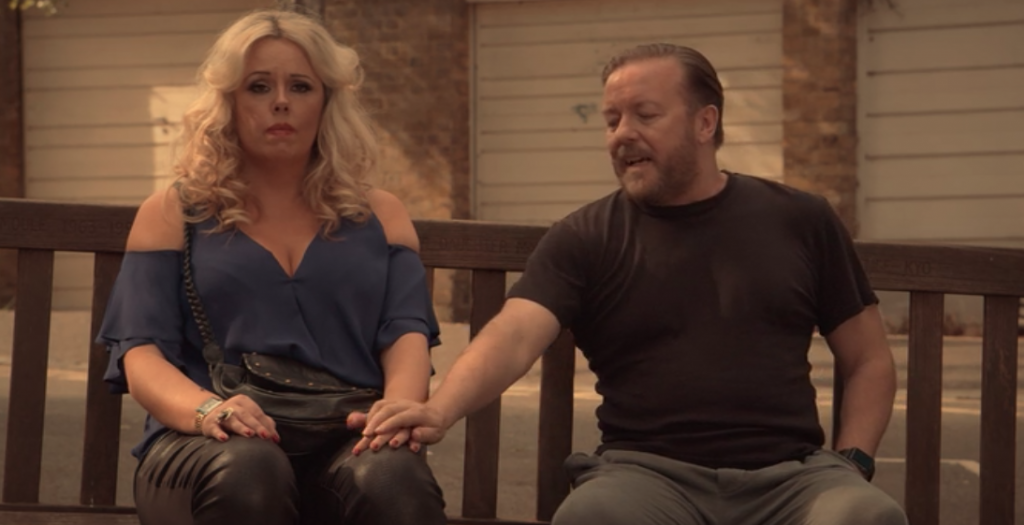 Tony’s friendship with a sex worker is full of nuanced moments of revelation. His casual use of the term ‘prostitute’ and her retort, “sex worker,” becomes a gentle joke between the pair. Her kindness towards his pain—and his returned comfort when her friend Julian overdoses—creates an unspoken acceptance of life being just as it is. Meet all people where they are, and you can help change their outlook. She is consoling to Julian when he loses his girlfriend to an overdose. Something, it is highlighted, that few do with deaths of that kind, as it is seen as their own fault. Her treatment of Julian and Tony is no different. She only sees the good in people, not the circumstance.

Everyone Should Be in the Local Paper 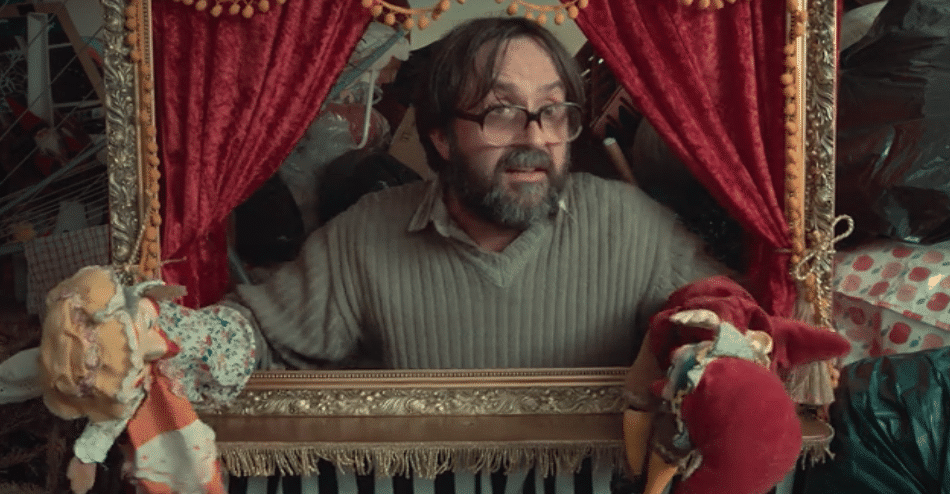 Local hoarder Brian Gittins descends on the paper daily with various made up news stories. It is a bid to get himself in the Gazette, and makes Tony irate. The realisation that the newspaper is “not for reading, but for being in” sparks understanding that we all just want to be heard. To say “I was here.” It feels like the guy is there for comedy fodder. Yet when the newspaper drops through his door showing him on the front page, the look on his face is incredibly uplifting.

I Want You to Meet Someone Else

Lisa’s recorded messages to him, peppered throughout each episode, are funny and beautiful. Her wish is just that he goes on without her, and be the best version of himself. The little vignettes in his tricks on her, the jokes they share, and the day they got their beautiful dog, show a rich and wonderful life. Her death isn’t the end of that. Lisa telling him to meet someone else is an act of pure love. Even the dying hold hopes for the future, for the ones who have brightened their lives to the end.

This final lesson is something so obvious, yet worth remembering. An understanding to show ourselves, as well as other people. The heroine addicted colleague Julian who steals from Tony, and the brother-in-law showing up for him every day even though it is like trying to “free an angry rat from a trap.” Even in stealing his courage and asking out the nurse. These moments highlight that whatever trouble you are in, you are just a person trying to deal with life. So when she says: “Let’s go for that drink then,” his teary thanks after all his darkness sparks her gentle response

Throughout the show Tony’s will to live builds. Pieces of hope delivered by long and short-term friends, or acquaintances, combine to make the picture clearer. Gervais’ never minces his words when it comes to religion, so when he gets into a discussion with colleague Kath about said topic, we are on tenterhooks waiting for the punch. Yet it actually is more hopeful than imagined. The takeaway from the interaction is this:

This is all we have, and we have to enjoy every moment as if it is our last. If you look at Gervais’ past work, you see the outlines of hope everywhere. Sometimes it is misplaced (like Brent’s music career). Sometimes it is joyful and honoured. But hope is the driving force behind anything we do.

Oh and points if you noticed the little thank you to Karl Pilkington thrown in there:

“Cheers Lenny, for being my human stress ball. Letting me squeeze your neck. What a good fucking mate you are.”