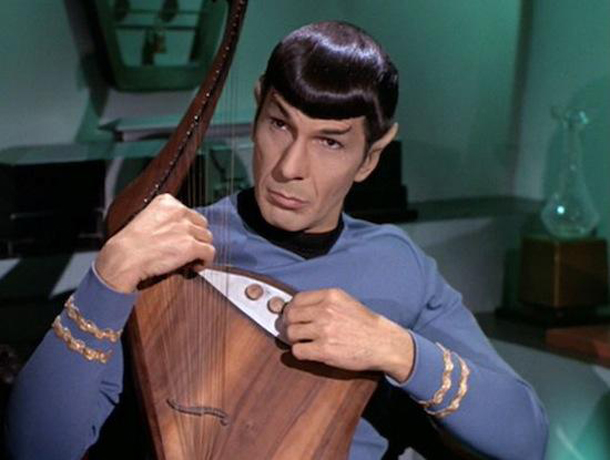 The original Star Trek series is silly, campy, and colorful and the GIFs rain from the Heavens! Every new GIF is the favourite for a while, until you find the next hilarious, touching, or ridiculous animation. Typing “Star Trek GIF” into Tumblr is like pulling the lever on a slot machine that always pays out. YOU WIN!

Here is my top ten list of Star Trek GIFs:

Oh The Naked Time, thank you for the laughs. Tainted water causes the crew to lack all judgement and self-control, therefore acting ridiculously.

Speaking of losing self-control, here we see Spock freaking out during his pon farr. He’s in grave need of some ring-a-ding-ding with T’Pring.

He can however, travel through time…

Spock doesn’t lie; he exaggerates in order to save everyone. However, he will not exaggerate to spare someone’s feelings or stop annoying McCoy.

It is a crime to pick just one of Kirk’s many signature moves. However, this resonates with me as once upon a time, in rural Ontario, my sister and I had nothing to do all summer but watch Star Trek and play fight. We were not WWF kids, so all our play fighting moves came from Star Trek, Batman, etc. After watching this episode, we decide to run at each other from opposite ends of a long hallway and jump into kicks at the same time! This kick-jousting tournament ended exactly as you would have expected it to: with two children lying in pain clutching their Charley-Horse ridden shins in agony, but laughing hysterically.

No GIF list would be complete without the Gorn. I see Gorn GIFs pop up on non-Star Trek related sites all the time. The Gorn’s fabulous mini dress and discoball eyes could be enough on their own, but seeing all of Kirk’s fighting moves, which include tossing bouncy boulders in the Gorn’s general direction, make this GIF a classic.

Thank you to this GIF which showcases a silly joke copied by dad’s everywhere. This man is an engineer.

Tribbles… This was the episode that started it all for me. My parents knew that to entice me into watching the rest of their beloved series, they would have to coax me in with a silly plot and fluffy creatures.

Many remember Wrath of Khan for Shatner’s famous scream, but I remember it as the the film where Kirk must face his worst fear: a no-win scenario and the loss of his best friend.

In this scene, Kirk and Uhura are being forced by telekinesis for the enjoyment of creepy Platonians. I’m including this GIF for it’s historical context. Though it is technically not the first interracial kiss depicted on television, it is certainly the most famous of it’s time. NBC wanted to shoot two versions (one with a kiss and one without) and the actors flubbed every take without a kiss to force the real kiss to go out on the air.

The Rise of Video Conferencing – Infographic