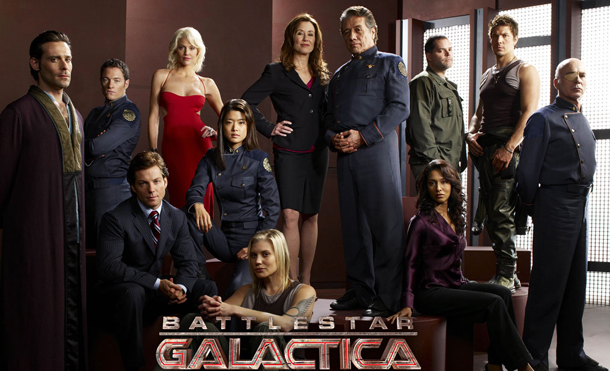 Thanks to a robust fandom and non-stop action, there are an excessive number of Battlestar Galactica GIFs online. Trolling through so many has been hilarious and heartbreaking as certain GIFs capture a moment or emotion that instantly bring us back to the couch. After you check out these GIFs you are going to be evangelizing about BSG to your uninitiated friends for the rest of the week. Those who have just finished their Breaking Bad journey may be particularly vulnerable to getting addicted to a new show. Share your DVDs with caution.

Here are the 10 best Battlestar Gallactica GIFs ever:

Kara Thrace is nobody’s victim waiting to be saved. Even as she is being farmed by the Cylons for reproductive material, she is a chaos-filled warrior in her heart. She suspects Simon from the beginning and her instincts don’t betray her. Later we learn that Simon is the fourth Cylon model.

In this GIF, Helo sacrifices himself to save Gaius Baltar, believing that the life of a renowned scientist would be more useful to the human race than his own. Karl “Helo” Agathon was originally going to be killed off early by radiation poisoning, however the character and acting were so compelling that fans demanded to know his fate. The fan reaction prompted the writers to revise his role. His last name, Agathon, comes from an Greek phrase meaning, “the beautiful and the good.” I don’t think anyone could argue a more appropriate name choice.

This shadowy figure is Felix Gaeta, who acted as an anonymous informant to the resistance on New Caprica. His anonymity almost gets him killed as The Circle almost airlocks him for collaborating with the Cylons and the hundreds of deaths. Despite his efforts to aid the resistance, he is executed for mutiny alongside Tom Zarek, another character with many falls and redeeming moments throughout the series.

I know this is two GIFs, but I’m a liar and a scoundrel, and this scene deserved two GIFs. Cavil had been using Tigh’s life to manipulate Ellen into helping the Cylons. Tigh knows that Ellen’s betrayal is punishable by death and that he is responsible for killing her. After all the suffering he has experienced on New Caprica, this was his greatest torture. In a final gesture, Ellen, knowing that Tigh must kill her, takes the cup from him of her own free will, drinks, and dies shortly thereafter.

Doc Cottle is a truly wonderful character. He is rude, gruff, and crusty with no hint of sweetness. Underneath his grumpy facade, he only truly cares about one thing. Healing is his life’s work and he doesn’t care if you are the admiral or a grunt, a Cylon or a human. In this scene, D’Anna is surprised that his goal is to alleviate suffering, with no strings or caveats.

After being knocked unconscious during a shoot out with a Viper, Kara has a vision with a being that looks like Leoben who forces her to confront all the emotional baggage that has led her to be the person she is. She briefly regains consciousness only to tell Lee Adama to leave her to die. She experiences a great calm and then her Viper explodes.

This GIF depicts the famous “Bucket Drop” manoever. There’s not much to say. The Cylons are about to nuke New Caprica and all the humans we know and love. Adama jumps into the planet’s atmosphere and deploys Vipers while hurtling toward the ground. He jumps out just in time to avoid fiery doom. Go rewatch this episode, right now.

Roslin shows that she is more than her schoolteacher exterior in this episode where she orders Kara to interrogate Leoben. As soon as Roslin discovers what she needs to know from Leoben, she orders him thrown out an airlock.

No matter what happens, Bill Adama loves Kara like an adopted daughter. He shows her the love, strength, and parental guidance that her own mother never could. She places trust in him that her mother could never earn. When she feels lost, alone, and unsure of who or what she is following, she seeks guidance from Adama.  In a moment that never fails to make me verklempt, he tells her, “I know what you are. You’re my daughter. Don’t forget it.”

Lastly, I present to you Fat Lee, without comment. The emotion on his little piggy face says a thousand words.

November Movie Preview: Give Thanks For Good Movies