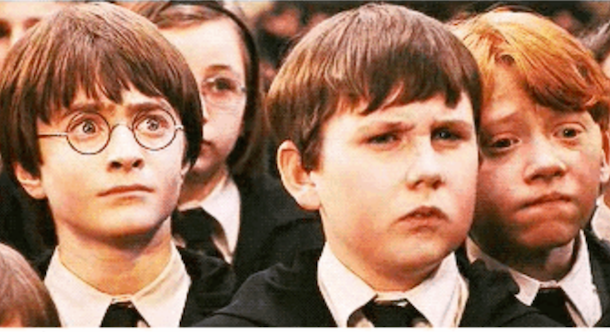 Another fact: less than 100% of culturally aware humans understand that just because you catch the snitch, DOES NOT MEAN that you win the match.

Harry Potter ignorance is real, and it’s growing faster than lizards are taking over the White House. It might seem like our entire generation camped out for every midnight release/movie premiere/book signing, but recent polls show that not all able-bodied persons were in attendance. The implications of such apathy are frightening. What if we woke up ten years from now and everyone thought Cho Chang was the fink instead of Marietta Edgecomb? Frankly, it’s not a world I want to live in.

Some offenders, aware of the significance Harry Potter has in modern culture, try to mask their ignorance by watching ABC Family’s Harry Potter Weekend or the Potter Puppet Pals skits, as though this will somehow compensate for nine years not spent debating Snape’s allegiances. Others wouldn’t know a niffler from an anteater if it pulled gold out of your ass. Whatever your breed of ignorance, I’m here to tell you that it’s not too late. Maybe too late for me to like you, but hey, there’s plenty of fish in the sea.

In the effort to create an open dialogue and reach some kind of understanding, here are 10 real-life examples of misinformation, misperception, and overall astounding ignorance. If I can help just one person who thinks that the Burrow burned down in year 6, I’ll know that I’ve done some good here.

Oh really, you’re going to unlock my ass? That sounds nice, I hope you find what you’re looking for. In the meantime, why don’t you try out Rectumsempra, I hear it’s a doozy (Standard Book of Spells, Chapter 7).

2. “I don’t get the last book/movie, it’s just an extended camping trip.”

I see what you mean. Tent-pitching, plant-foraging, searching for hidden pieces of an evil sorcerer’s soul. It’s pretty boring to be honest, especially when people keep trying to kill the main characters. Remember when they infiltrated a corrupt government institution? Yawn. Oh, and led an INTERNATIONAL REVOLUTION? Couldn’t wait for that to end. It just sucks that they’re not going to class and stuff, you know?

So you’re saying that you wouldn’t want the ancient larvae from Godric Gryffindor’s head nesting in your hair? Yeah, I’m confused.

4. “You’d think they would realize by now that something catastrophic always happens around exam time…”

5. “But Harry and Hermione, like, belong together. Did you see them dance?!”

Uh, should Luke and Leia have hooked up once they found out they were siblings? First of all, the dance scene from Deathly Hallows Part II wasn’t in the book, and second, it was a completely platonic expression of platonic love while Hermione pined very much non-platonically for RON, a relationship that has been loaded with sexual tension since the epic Scabbers-Crookshanks fight of year three. Harry/Hermione shippers are sick, twisted individuals who will destroy everything you love. Don’t make it easier for them.

Actually, food is an exception to Gamp’s Law of Elemental Transfiguration, so yeah. I don’t know what kind of fairytale you’re living in, but the wizarding world has rules.

7. “Guys, I wish food would just appear on my plate like at Hogwarts.”

Right, that’s how it works. Attention elitist douchebags, house elves SLAVE over those meals. Why don’t you take a couple of SPEW badges and pass them out to your friends—maybe you’ll learn to think about the criminally-exploited hand that pours your pumpkin juice.

8. “I’m going to England next month– hope my bank does galleon exchange.”

Oh honey, I know it can be hard to let go—I’ll admit I still check the mail for my letter too—but there comes a point when you realize that it’s time to wash off the permanent marker scar and leave the robes at— what’s that? You’re not kidding? Well, looks like I’ve found the first item on my next list, 10 Astounding Moments of General Life Ignorance. Do me a favor and never try to run through a wall. On second thought, maybe go for it.

9. “I don’t get why Harry, Ron, and Hermione have to sneak around school all the time. Can’t they just teleport?”

NO APPARATING WITHIN HOGWARTS FOOL. And “teleport,” really? Did I just ask your five-year-old self which superpower you’d most like to have? This is truly the pinnacle of ignorance.