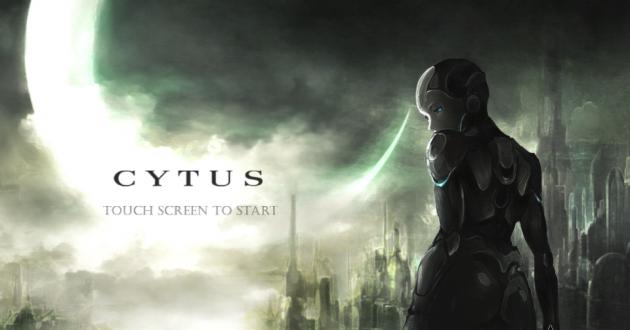 Rhythm games are as hard to find these days as fanny packs and Surge.  With the declining interest of the popular plastic-instrument pastimes of Guitar Hero and Rock Band, there just is not much of a demand for those types of games anymore.  Luckily, there are still enough diehard fans of the genre so good music games are still being made.  One such example (and one of my favorite games currently) is Cytus

Developed by Rayark Games, Cytus is a music game for Android, iOS, and PS Vita (I personally own the iOS version).  Like its predecessors, you must hit notes in rhythm with the song you are currently playing… but that is where the similarities end.  The execution and songs available are vastly different from the mainstream music games in existence.

Games like Guitar Hero and Tap Tap Revenge use a steady stream of notes that travel down a “highway”.  More often than not, these notes correspond with the main guitar part for a given song.  In Cytus, the notes simply appear at various points on the screen.  A black bar bounces from the bottom of the screen to the top of the screen in rhythm with the song.  You must hit the appearing notes as the black bar crosses them.  Since each song is unique, the notes will correspond to whatever is driving the song at any give time, whether it be a piano solo, rhythm guitar, or simply the bass beat in the background.

It sounds simple, but it can actually be quite difficult.  There is a bit of a learning curve in waiting for the note to completely form instead of prematurely tapping the note.  If that weren’t bad enough, the game throws in a few wrinkles to break the monotony of simply tapping single notes.  You’ll have to hold certain notes for a prolonged period of time, hit multiple notes at once, and even drag your finger along complex paths of notes.  Combine all these elements at once, and you can see how this game can get difficult very quickly.

Fortunately, the timing is very forgiving.  You can certainly hit the notes in perfect rhythm with the song, but if you are a little early or a little late, it will still register a hit.  This is especially helpful during some of the faster songs, where notes are appearing everywhere.  However, you’ll have to be absolutely perfect to achieve 1,000,000 points and the coveted “Master” ranking.  There are only two difficulties (Easy and Hard) and the jump in difficulty between the two is vast, so you may want to try a song on Easy before punishing yourself attempting Hard.

Graphically, there isn’t much to see.  The menus have a cool science fiction look to them and each song is given its own title screen, but that’s about it.  The actual gameplay elements look very nice against the white background, which I think was purposely done by the designers.  While playing a song, the focus is on hitting those notes and minimizing distractions in the background.  Because some of the more difficult songs can have up to 1,500 notes to play, and since you probably won’t have an audience while playing this game, this is probably a good thing.

Now, what really makes a good music game (aside from the game play, of course) is the selection of songs.  Cytus opted to go with original songs instead of existing songs from established bands and singers.  While some people may be devastated that they can’t play their favorite songs on the go, I was pleasantly surprised by the variety of songs available.

Seriously… the variety is amazing.  Everything from pop, rock, and metal to jazz, hip-hop, and trance is represented (though if I had to pick a majority, it’d be trance).  The game is split into eight chapters (currently), though there doesn’t seem to be a theme for each chapter.  I found myself playing songs multiple times in a row, partly to get a better score and partly because the song was enjoyable.  There are Japanese rock bands, French pop singers, and various DJs adding their flavors to the game.  There is definitely something for everyone, which is always important when making a music game.  Unfortunately, only a handful of songs (“Cytus – Prologue”) are available for download on iTunes.  Trust me… you’ll want to be able to listen to these songs in your free time.

Cytus is worth checking out.  It’s a solid music game for mobile devices, and it comes with 62 songs (plus another 32 you can purchase separately).  On top of that, the developers are releasing new chapters of ten songs for every 100,000 downloads (it currently sits at 292,000+).  The music is very enjoyable and the game play is challenging and rewarding.  You will find yourself coming back for more over and over again… just make sure you wear headphones for the optimal experience!