Home NewsEntertainment The (Other, Other) $0.99 Movie of the Week: ‘Swiss Army Man’
EntertainmentTV and Movies 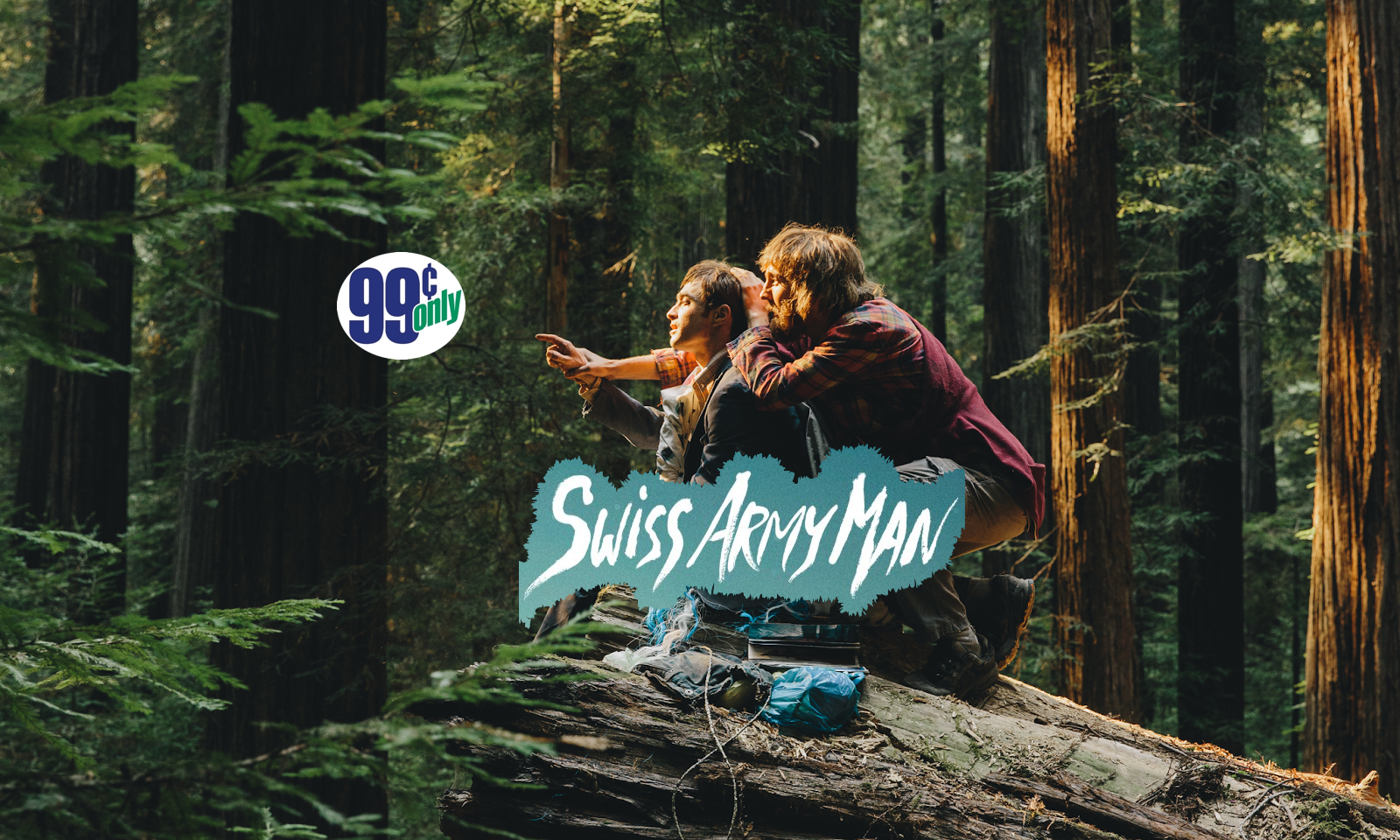 Ok, the featured $0.99 movie this week is that big budget Ben-Hur remake. There was not a movie released last year that I was less interested in seeing. Even a bargain rental price hasn’t peaked my interest. If you want to see Ben-Hur, I recommend dropping $3.99 on the 1959 Best Picture winner instead. But if you’re clamoring for a good cheap movie this week, there’s a few fantastic options in the iTunes ‘Movies You Might Have Missed’ section. So …

This week, Paul Dano and Daniel Radcliffe try to survive a physical and emotional wilderness in Swiss Army Man.

But Maybe Everyone’s A Little Bit Ugly. Maybe We’re All Just Dying Sacks of Shit, And Maybe All It’ll Take Is One Person To Just Be Ok With That And Then The Whole World Will Be Dancing And Singing And Farting, And Everyone Will Feel A Little Bit Less Alone

Trapped on a deserted island with no hope of rescue, Hank (Dano) is ready to end it all … until a body (Radcliffe) washes ashore. The body of a dead man, that is. But Hank befriends the corpse and soon discovers that his new friend has some very useful abilities that may help him get home. Things only get weirder from there in DANIELS’ existential, offbeat comedy Swiss Army Man. 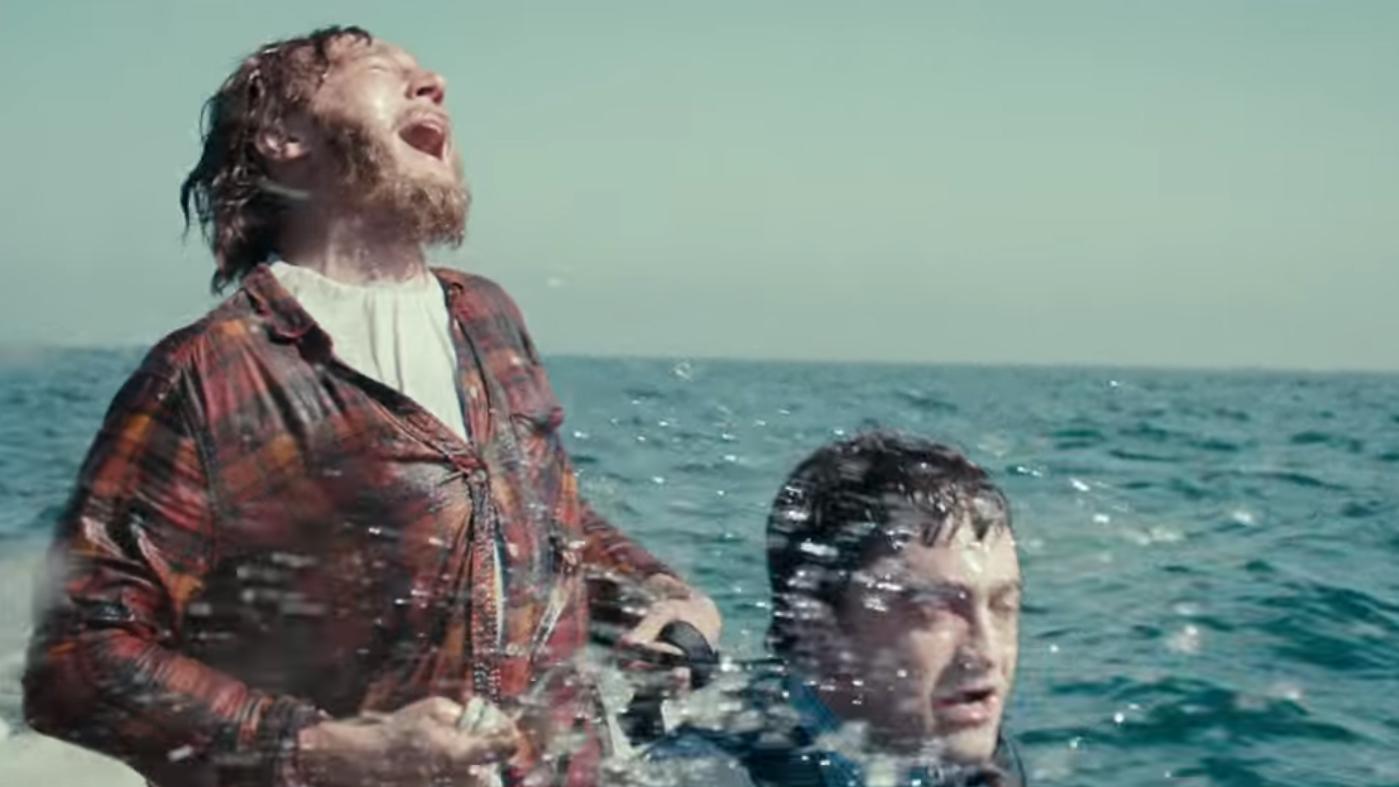 Manny, You Have No Idea How Nice That Sounds

By weird, I mean really, really weird. Like at one point in the film Radcliffe’s corpse (affectionately named Manny) is used as a machine gun weird. And then there’s Manny’s never ending bursts of flatulence. So much flatulence that Swiss Army Man was dubbed the ‘farting corpse movie’ after its premiere at the 2016 Sundance Film Festival.

To be fair, there are a lot of fart jokes peppered throughout Swiss Army Man. Most of them are inspired, original and very funny … which is no small feat in and of itself. Think about it, when was the last time you came across a really funny fart joke? But labeling Swiss Army Man a ‘farting corpse movie’ is to overlook the film’s underlying humanity.

The film was written and directed by Dan Kwan and Daniel Scheinert (aka DANIELS), the filmmaking duo behind inventive music videos for indie acts like Battles (My Machines) and The Shins (Simple Song), not to mention a wildly original short film titled Interesting Ball. If you haven’t seen any of their work, just know that their stories are blindingly original, driven by an unflinching sense of compassion and blending a DIY aesthetic with an often epic sense of majesty.

Swiss Army Man marks their feature debut, and sees DANIELS continue to push their patently unique style off the beaten path. Way off, in fact. I can guarantee you that you’ve never seen a story quite like Hank’s and Manny’s. Swiss Army Man doesn’t look or feel or sound like any film you’ve ever seen. And in the film’s giddily offbeat approach, DANIELS’ hit on a warmth, an honesty and an authenticity that eludes most Hollywood fare.

Of course, all of that style and originality would’ve gone to waste without the performances of stars Paul Dano and Daniel Radcliffe. Swiss Army Man could not have been an easy sell for the actors, requiring them to sing and dance and dress in drag and kick around in the dirt, but Dano and Radcliffe dedicate themselves so wholly to the narrative that – even in its most egregious absurdities – Swiss Army Man never quite feels absurd. Their work grounds the film in an arrested sense of reality. A reality that’s profoundly sad and disturbing, but oddly life-affirming and uplifting. It sounds crazy, I know. It is. And that’s why it’s so damned rewarding. You bet. Make no mistake, Swiss Army Man is not suited to all tastes. But adventurous viewers willing to give the film a chance are likely to be overwhelmed by its oddball charm and piercing insights. Fart jokes aside, Swiss Army Man is that rarest of combination of ambition, sincerity, and originality that we just don’t see in cinemas these days. For that reason alone it’s worth your dollar. Everything that comes along with it – like the film’s astonishing original score – are welcome bonuses.