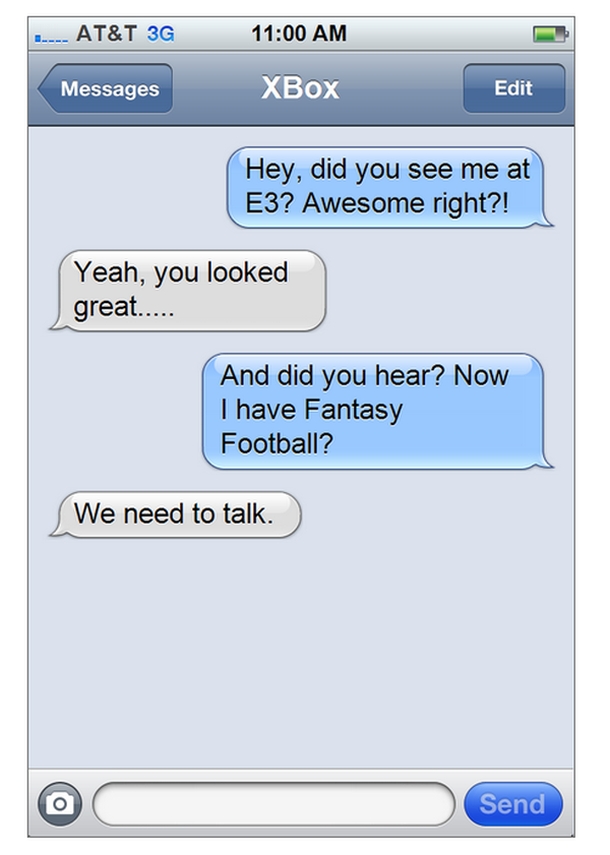 You’re a great franchise of consoles. It’s just, after your One reveal, then your E3 conference and then seeing Sony’s E3 press conference, I really feel that we need to spend some time apart.

I remember when we first met, you were only an Xbox then. I played Morrowind on you for hours and hours. Do you remember when I created my character ‘Drake’ on Fight Night? You’d beat me in a match, I’d make up swear words and yell them at your AI characters. Good times, good times.

Then I took the plunge when you became an Xbox 360. You were the first thing I bought, for my first flat, after I graduated University. Sure, I didn’t have a bed and had to sleep on a questionable mattress left behind by the last tenant, but I would have slept on broken glass (also left by the last tenant) rather than not have you with me.

I loved everything about you. I never thought this would end. I would have gotten a tattoo of you, maybe I still will, to remember the good times.

I just want you to know, this isn’t about looks.

You and PS4 look comically identical in my eyes, except PS4 looks a little like you would if you were leaning. It’s like that time, in Bring It On, when two of the teams do exactly the same routine. Embarrassment!

And it’s not your graphics, your graphics are beautiful. Don’t ever let anyone tell you differently. You have been pleasing my eyes with prettiness for years now.

You just don’t have what it takes to fulfill my lady gaming needs.

I tried to find a female character in your E3 announcements of games, at your press conference. I maybe found two games where I could be a girl. I’m not asking for every game to have a female playable character, I don’t want you to pressure developers to change a world’s mythos just to make a female character (I would never expect a female ‘Witcher’, but a female in the Witcher universe that I could play would be cool). But one or two female main characters would have been a nice nod to the fact that close to 50% of gamers these days have a XX chromosome. I mean, you’re ‘X box’…. Think of the marketing….

Even C.O.D, doesn’t have a female option as far as I’ve seen. You get all excited about a realistic looking dog, you pride yourselves on this being a realistic game, is it that your fantastic graphics engine just can’t handle the reality of a lady in the front lines?

I know, it’s not you, it’s the developers…. But C.O.D is an example of the rule, not the exception when it comes to the games you revealed for The One. It hasn’t always been this way- W.E.T, Bayonetta, Kameo, Halo, Perfect Dark Zero. You had strong ladies in those games, you even led with Perfect Dark Zero when you released the 360 (I remember seeing it, after the midnight launch- The first game I ever saw live on a 360).

It’s not just that Sony were able to promise me definite gaming titles that included kickass ladies amongst their main characters.

I need passion when it comes from games and Sony showed that at their conference.

Sure, the guys who were showing off Spark at the Microsoft conference were infectious with their love for all things gaming and creative. But they were a mere drop in the storm of excitement brought by the Sony presenters.

Shuhei Yoshida almost exploded in a cloud of star dust and joy while he was talking about games and what the PS4 could do. He loved it and he loved that other people loved it. For the first time, in a long time, I felt a connection with a person up on that E3 stage. Both of us were squealing with excitement at what this new wave of technology could do. I didn’t get that from Microsoft.

I wanted this to work.

Even after your reveal, I believed that we still had a lot to offer one another. But, I’m not the kind of gamer that you want to be in a serious relationship with. You’ve changed, you’ve moved on, you’re into fast cars, fantasy football and offering television channels that I can’t access because I’m not in America. And quite frankly, your ‘Kinect’ fetish, is kind of creepy.

I’m looking for a console I can settle down with, a console that reflects my values as a gamer. Sony is still all about the games, games I can relate to and play. If we stayed together, I’d only hold you back from what you want to do with your future.

We should still see each other though, from time to time. Maybe I’ll even get your new One some time down the track. But I don’t think I’ll be able to make our date in November, I’m going to hold out for PS4 and see when they want to meet up.

I wish you only the best for the future. Now, if you’ll excuse me…. I have to delete all the pictures of us together on Facebook, because I just think it’s easier that way.

iOS 7: What You Need To Know

There is 3 minutes of my life I’ll never get back.

hunterhspoon Was your ONLY comment on Geek Insider this? Oh man – you need to get a life!

Sad taters when XBox lets us down like that! Still, the graphics do look great, but as a guy I suppose I am less aware of the gender issues because I am always catered for.
That being said – there are a lot of guys who like to play as a girl!

Huh…just occurred to me, how do we know the dog in COD wasn’t female?