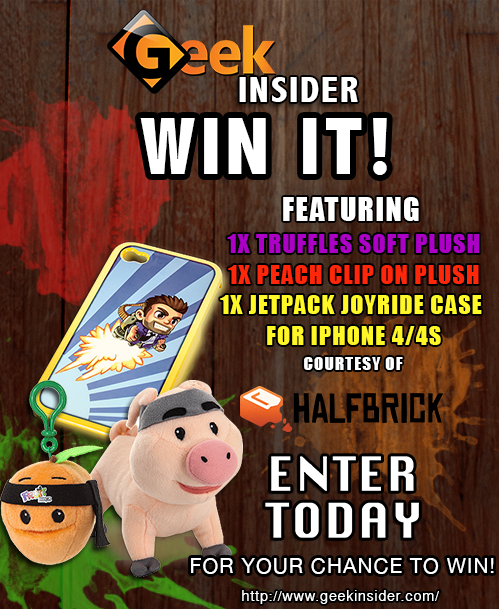 Enter now! Geek Insider is giving away one (1) HalfBrick Prize Pack to a lucky fan! Use the Rafflecopter below to enter and win. Don’t forget to ‘like’ Geek Insider on Facebook and share with your friends, as it increases your chances of winning!

By entering or accepting the prize in this contest, winner agrees to be bound by these Official Rules, Terms, and Conditions and to conform to all federal, state and local laws and regulations. This contest is open to all participants unless prohibited by their local state/country. For reference, the age of majority is 18 years old in the United States, with the exception of Alabama (19), Delaware (19), Mississippi (21), and Nebraska (19). The number of eligible entries received determines the odds of winning. No purchase necessary to enter or win. This contest runs from July 19th, 2013 through August 24th, 2013 at 12:00AM EST.

Winner will be selected through a random drawing from all eligible entries after contest closes to win. In the event that the original winner does not meet eligibility requirements or he/she forfeits the prize, the prize may be awarded to the next randomly drawn eligible participant. All entries must be received on or before August 24th, 2013. The winners will be notified via e-mail or message (as applicable). Winner will have 48 hours to claim prize after initial notification. If winner fails to claim within 48 hours, an alternative winner may be selected.

Get Charged Up with HYBRIDS Not-So-Secret Link

The Raskulls took my attention as well 🙂

I love Age of Zombies!
mcfallsk8er(at)aim(dot)com

Fruit Ninja Kinect..the first day I got the game I played it for over 8hrs and got every achievment! But man,The next day I was pretty sore,haha,but I love the game!