What Makes Nova Launcher Better Than the Default Android 4.0 Launcher? 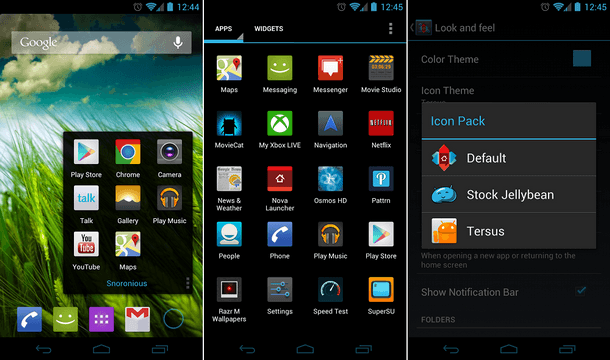 Android 4.0 Ice Cream Sandwich earned rave reviews for its visually appealing Holo theme which also accompanied a default launcher. As it turns out, a significant number of users demanded for a separate, alternative launcher. The demand was justified for the users who would use the OS on devices other than Nexus for which the default launcher worked absolutely fine. Soon, Teslacoil Software reacted by introducing Nova Launcher. Over time, the launcher has become the most polished application, even better than the default launcher. Below, I will try to point out why I consider Nova Launcher to be better.

Nova Launcher allows for a high degree of customization, letting the users use multiple features on their devices in any way they desire. With features like customizable grid and scrollable dock, the launcher allows the user to place more than 4 icons on the dock. If you haven’t used the application till now, you will be happy to know that you can place 7 icons per page, with maximum of 3 pages allowed.

Another good feature is the option to place folders on the dock. Rather than keeping icons for similar applications separately, you can place them in a single folder that can be instantly opened to launch a particular application. For example, store icons for different browsers in a folder and access any of them as and when required. A per-icon swipe gesture is another notable feature that lets a single icon  launch two different applications, one through tap and the second through swipe. A great way to save space, enhance performance and utilize time!

Next is another interesting feature of multi-touch gestures that allows you to perform different things through actions like Pinch In, Pinch Out, Swipe In, Swipe Out, Double Tap, Two Fingers Swipe Up and Two Fingers Swipe Down. App Drawer will let you store more number of icons (more than what you can store on the dock). Notable is the choice to scroll the drawer either vertically or horizontally.

From resizing widgets to customizing animations and adding themes, Nova Launcher can help you do many more useful things. Nova Launcher 2.0 has been recently launched with many new features and fixes for the issues faced in the previous versions. While the free version of the application is quite capable, buying the paid version called Nova Launcher Prime only for $4 can extend the functionality further. Say no to the manufacturers’ default launcher and invest in a customizable launcher for improved experience.

What do you think of Nova Launcher? Please share your thoughts through the comments feature and make this article more useful to other readers.

Atooma – an Android Automation Application That Grows on You