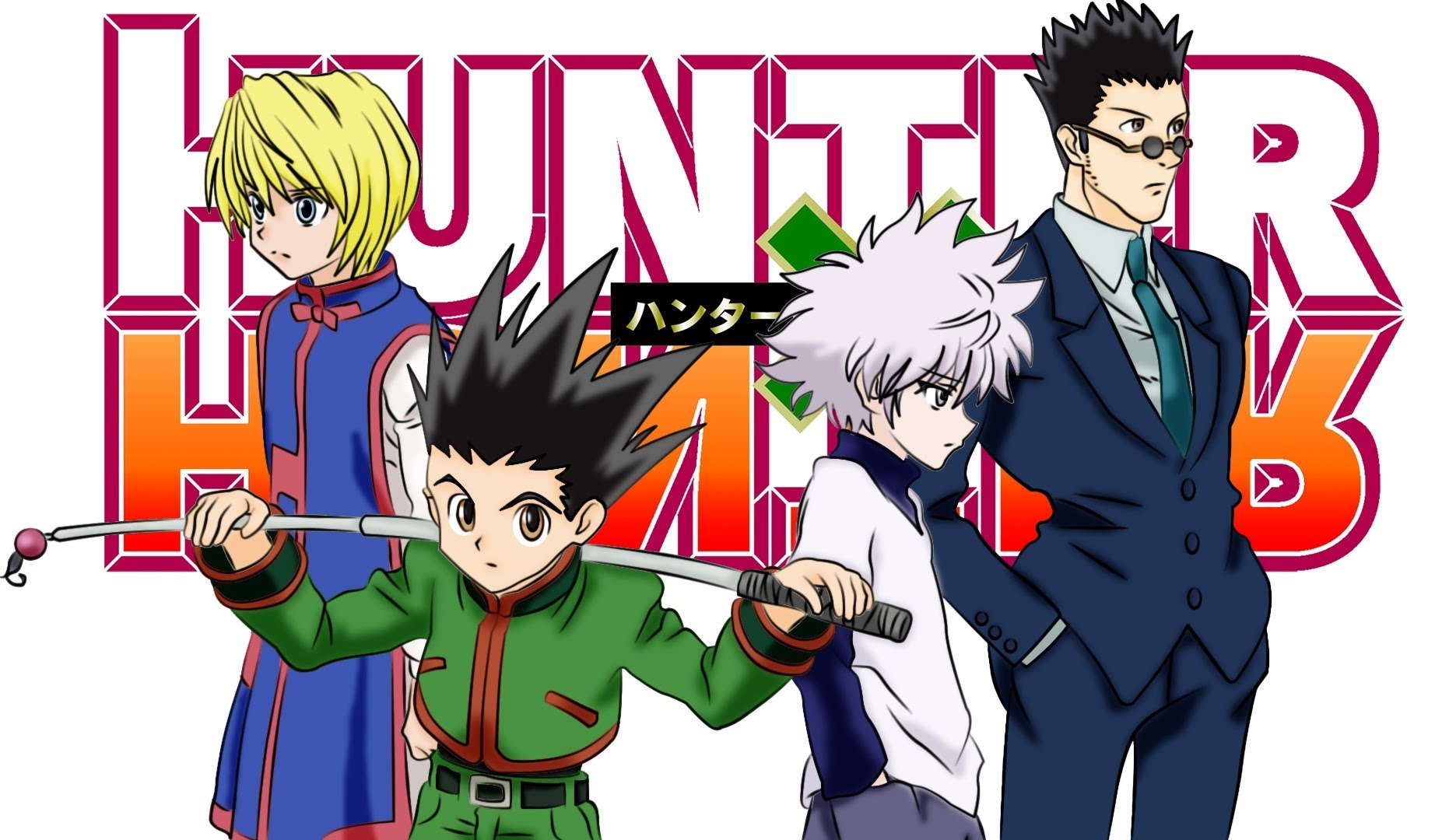 There’s little else stronger than the bond of father and his son. Hunter x Hunter follows the story of a young boy who sets off from his quiet home in the woods to pursue his father, wherever he may be. The main character- Gon (Goh’n), has a dream not that uncommon from everyone else, Gon wants to become a Hunter.

Why not a doctor or an astronaut? He leaves the house at the age of 15 and an occupational killer isn’t usually the first ‘career’ to come to mind for a child in our culture. I will remind you that Gon wants to find his father, he wants to ask him why he decided to leave him as a baby to pursue the title of a “Hunter”, instead of staying at home in the woods to take care of him. It makes sense for him or anyone really, to want to know why your parent decided to not stay and love you, this is what led him to leave him home and become a hunter. Hunters in this universe are of the most high regarded class in society, they are the most wealthy, and live above the law. Hunters also have entrance into any sovereign country in the land, and have access to areas restricted to any regular person. Most people wish to become a hunter because of its fame and fortune. For many, it’s just a dream.

Becoming a Hunter is no simple task, not to be treaded over like gum in the street, but revered. The “Hunter Exam” as it is called, is a test of will, stamina, brains, and even strength. Gon arrives to the test with a few friends he made at the beginning of his adventure, their names: Leorio, Kurapika, and Killua. While being tested within the various trials of the Hunter exam they all bond together through each unique task and grow stronger together. They reveal why they want to become Hunters and what they will do with the money and their power, hundreds of people each year tackle the exam but only a few actually pass. The reality of death in the exam is more than likely, but if you survive you are more than welcome to try the following year. The exam does a great job of seeming endless and pushing the note on what is achievable and not achievable by these contestants, what will they sacrifice for victory?

Gon turns out to be a natural during the exam, persistent and hard-headed. The exams coordinators and judges take notice of his skill and Killua’s as well. Killua is a frightening child, at first glance he’s just a white-haired lad with a severe case of apathy. Beneath that small body is a top-trained killer from a world-renowned and feared family of assassins. He was literally born to kill, and I mean c’mon, his name is Kill-ua. He and Gon get along quite well despite their polar opposite natures, Gon is Killua’s first friend, this is big for him because his family taught him to be cold-hearted and very mechanical in thinking. This will become a larger factor in the series.

The other two, Leorio and Kurapika have purposeful motives unlike that of Killua. Leorio in the beginning comes off to Kurapika as sort of scumbag but redeems himself to surface his real reason for wanting to become a Hunter. The gist of it is that he wants to become a doctor and have the money to take care of others due to a past friend’s death, the Hunter title is the fastest thing to make that happen. Kuripika on the other hand wants to become a Hunter to avenge his family murdered by a notorious gang, he is on a quest for strength. It takes a long look until you realize he isn’t a girl, the blonde hair is a bit confusing, I’ll be honest. The group is successful in completing the Exam, but someone gets left out due to a little mishap, but I’ll keep the details to myself.

On that note the story isn’t as happy as I have depicted.  Dark forces are revealed more and more as you watch the show, even moving onto a focus of a “ki” type energy that really redefines true strength in the series, past our human capabilities. In particular there is a man named Hisoka who makes himself known very early in the show during the Hunter exam, it seems as though he is a veteran and has already taken the exam, what is his motive? He is obviously much different from the other contestants and you will notice that he has some odd fascinations toward ending lives, we could say fetish, can we say fetish? He takes an immense amount of pleasure in what he does and it helps that he’s good at it, he has no problem getting through the exam, although this comes to no surprise to whoever is viewing. As fate has it, he takes an interest in Gon due to his immeasurable potential, he makes a declaration to not fight him until he is “ripe” with potential, it’s a bit creepy. Hisoka is the first real example of this ki-esque energy being displayed, he has this off putting aura which is very dark, characters from the show pick up on this very quickly. His magician slash jester gimmick doesn’t help, the guy is just weird. This is Gons first real threat, and overall a threat to everyone.

After the exams and much of the drama that came with it, the story opens up after most of the winners have received their licences. Mostly everyone splits up to do what they planned with the new status, but all together agree to meet back together in a few months, they have all become very good friends during the passing weeks, except Hisoka. Gon and Killua stay together since they are of the same age and Gon wants to become stronger. With Killua being Killua, he informs Gon that there are places to fight and get money at the same time, so they set their sails on seeking strength. As a Hunter they can go almost anywhere and do anything, how will their stories unfold? Can Gon find his dad who has become a world-class Hunter? You’ll have to see for yourself.

Hunter x Hunter sets a great story and very memorable characters, this manga and anime have been very successful in the past few years and has a well plotted character progression. Their finding of new abilities and enemies is actually interesting, I’ve found my self streaming episodes on episodes until PM quickly became AM. Gon and the gang prove themselves to be an entertaining bunch, in the end their adventures can go anywhere and the show really takes a creative mind. If you fight for what’s right, and have a soft spot for discarded children, consider Hunter x Hunter a worthy addition as your next watch.