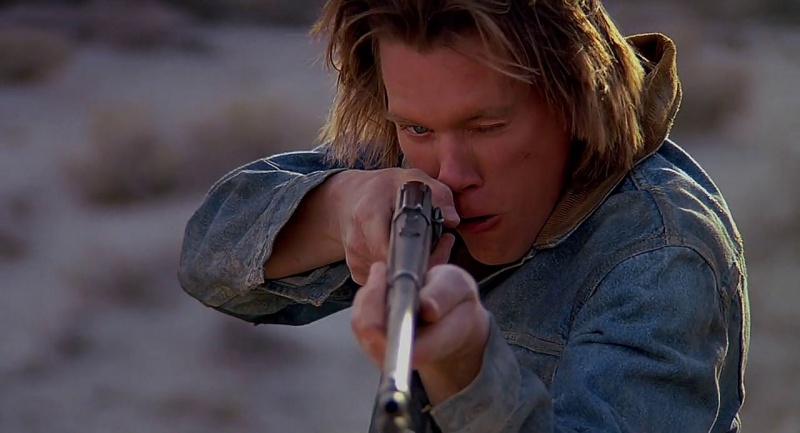 It’s been a long twenty-four years since 1994 sleeper hit Tremors came out in theaters. Since then, the film has spawned a whole franchise, including a television series and a myriad of sequels. The franchise’s long list of entries has introduced fans to many a new character, but it also has brought many characters from the first film (most notably paranoid gun nut Burt Gummer, played by Michael Gross), which at least is partially responsible for the the success that the franchise has garnered.

But one character that sadly has remained missing from the fray is the first film’s principle protagonist, Valentine McKee (played by Kevin Bacon).

A handyman by day and a ladies’ man by night, Val and his business partner-slash-BFF Earl (played by Fred Ward) woke up one day with the resolution to “set [their] sights higher” and leave behind their lives in Perfection Valley, Nevada (population: 14). Unfortunately for them, the same day a pack of monstrous underground worms came to town and started dining on the locals. The fate of the town—and the lives of their friends and neighbors—rested on the two hapless men’s shoulders as they fought to figure out a way to kill the worms and get everyone safely out of Perfection.

Little is known of what became of Val post-Tremors, although Tremors 2: Aftershocks revealed that he “married a good woman” (presumably his love interest from the first film, Rhonda LeBeck, played by Finn Carter) and that a photo of him and Earl that was taken at the end of the first film (by Rhonda) was featured on the cover of Time Magazine.

Now, after a recent rewatch of the film, Bacon wants to know: what did become of Val?

In a recent interview featured on the Huffington Post, he stated in an answer to a fan’s question regarding his decision to do the film that he’d like to work on a Tremors reboot that focused on Val and what he’s presently up to.

Said the actor: “I have a real dream right now, which is to…see the character [Val], you know, twenty-five years down the line and see what that guy may have become.”

Bacon went on to talk about his career and emotional state during the filming of Tremors, neither of which were at their peaks:

“I felt like I was at a low point in my career,” he said. “I remember just breaking down one day…and having an anxiety attack and saying to my wife, ‘I’m doing a movie about underground worms! I can’t—what’s happened to me?!’”

The failure of the film at the box office did nothing to alleviate the actor’s struggle to keep his career afloat and himself from becoming disheartened, especially since his big break in 1986’s Footloose not five years before. But he did find some positivity in the sales that the film brought in once it hit video stories. These sales were the ones that spawned the popular franchise that Tremors is today.

“It was one of those movies that found its life on video,” he said.