3D televisions and the stylish glasses that come with the experience are probably the greatest innovation to home cinema in recent years. Now, with that great concept in mind, think about how nice it would be to take those things everywhere you go. With video eyewear technology, the Vuzix Wrap 1200DX has made this possible. 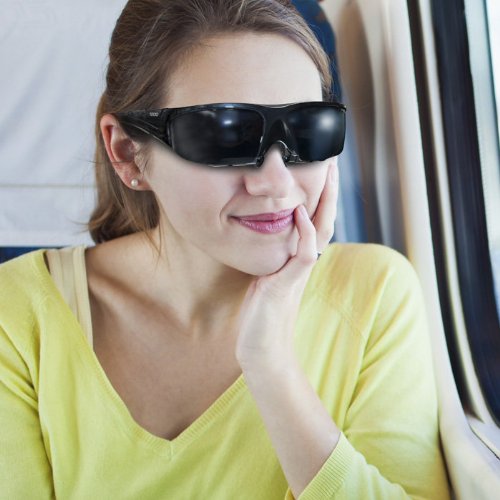 These lightweight sunglasses give you a high-definition 3D viewing experience on the go. The display, both 2D and 3D compatible, is equivalent to a 75-inch flat screen television viewed from ten feet away. The glasses can either put out a 16:9 or 4:3 aspect ratio.  As the glasses use two high-resolution screens to display the image, the user will be able to manually adjust focal points and viewing angles to fit their needs. You can also adjust the contrast, saturation and brightness using the on-screen display controls. Also included is a light shield to contribute to the cinema experience.

Included with the Vuzix Wrap 12000DX are a pair of earbuds, along with three sizes of noise isolation rings. However, these earbuds are removable so you can plug in your favorite set of headphones or run a cord to your external speakers.

Another great feature of the Vuzix Wrap 12000DX is the Wrap Tracker. This small device, which is removable, works with many Windows-based games and simulation programs and allows you to control your in-game perspective by moving your head in the desired direction.

The built-in battery will give you up to 4.5 hours of runtime. The included USB cord can be used as external power while using the device as well.

The Vuzix Wrap 12000DX is compatible with a wide array of HDMI-friendly devices. Examples include: many Smartphones and tables, laptops, gaming consoles and Blu-Ray players. Devices that use other video outputs may be used with the glasses through an HDMI-compliant adapter or a MHL adapter for Android phones.