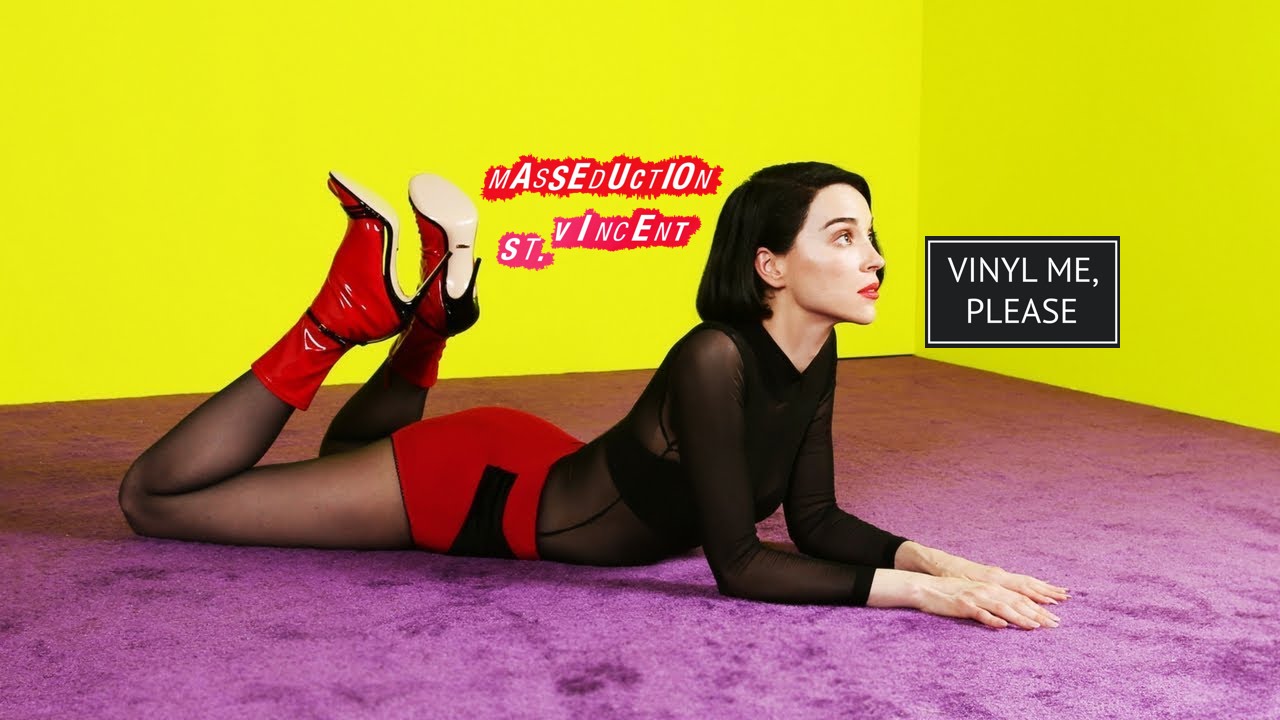 Here’s how it works. You send Vinyl Me, Please some of your hard-earned money (plans start at $25/month) and they send you one meticulously selected album worthy of your time and attention. Easy, right? Each custom pressing (often on colored vinyl!) also comes with special features like original artwork and even a recipe for a companion cocktail. Best of all, you get access to the VMP online store. That means you’ll have a chance to grab a copy of previous VMP selections from the archives – including October’s jaw dropping release of Moses Sumney’s latest, ‘Aromanticism’  – not to mention a bevy of rare and exclusive releases.

The November store is now open. As per usual, there are some seriously drool-worthy titles in stock. Like a killer reissue of Willie Nelson’s outlaw country classic The Words Don’t Fit The Picture (ltd. to 1,000 copies on salt & pepper colored vinyl) and a fresh pressing of Sharon Van Etten’s heart-wrenching, folk-tinged debut (It Was) Because I Was In Love (ltd. to 1,000 copies on black and cloudy clear wax with additional 7″ included). If those albums aren’t quite your speed, you might want to scoop up the 25th anniversary reissue of R.E.M.’s Automatic For The People that everybody’s gonna be “hurting” over. But if this month’s featured artist St. Vincent is really your jam, you can grab a pink and white marbled copy of her self-titled release St. Vincent this month as well. Be warned though, it’s limited to 2,ooo copies.

Just as a general PSA – the holidays are officially upon us. Team VMP is ringing in the season by stocking the November Store with holiday-themed releases from the likes of Willie Nelson, Sharon Jones, Johnny Cash, She & Him, and Ella Fitzgerald … any of which are sure to jazz up your holiday party this year. And if you’ve got a music lover in your family, a Vinyl Me, Please subscription is a can’t miss option to jazz up their stocking too. So take our advice and don’t overthink it. Do yourself a favor and sign up today.

So, what’s in this month’s box? Nothing less than a shiny new album from the indie scene’s own anti-pop diva, St. Vincent.

Oh hey, you didn’t hear about VMP’s big ass garage sale last month? Too bad, ’cause that limited edition of Daniel Brandt’s Eternal Nothing is officially sold out. Better luck next time.

She’s been called the female Bowie. She’s been called the female Prince too. You can add ‘the second coming of Kate Bush’ to that list of comparisons as well. Truth be told, none of those comparisons are quite accurate … mostly because there’s not an artist out there quite like Annie Clark – aka St. Vincent. Still, it’s easy to see where those comparisons come from. After all, she cut her teeth with the cultish, indie rock collective The Polyphonic Spree and was a member of Sufjan Stevens’ touring band in 2006. Since then, she’s toured with everyone from The Mountain Goats to Beck. And did we mention that she took her name from a Nick Cave song? We offer that last bit merely as proof that her influences are in a word, broad. And virtually impossible to nail down to a single artist.

As you can imagine, Clark’s various influences have bled through all of her albums with varying degrees of intensity. Clark has shredded through four albums worth of pop-tinged art rock since donning the name St. Vincent. Each of those albums have broadened her sound, even as they’ve continued Clark’s penchant for blurring the genre lines between rock, pop, jazz, soul, and punk. Masseduction is Clark’s fifth St. Vincent album, and it’s certain to leave some of her more long-term fans claiming that the eclectic artist has finally ‘gone pop’.

In many ways, that statement would be true. While dots, loops, and tasty grooves play a major role in Clark’s overall sound, they’re always tempered by glitchy electronics and some serious guitar riffs. Don’t worry, Clark’s guitar still packs a punch on Masseduction, but there’s a distinctly cleaner pop sound at play throughout the album. That’s not necessarily a bad thing. The 13 tracks on Masseduction form one of the most meticulously produced pop albums in recent memory, and if St. Vincent has proven anything over the years, it’s that she more than has the pipes for pop stardom.

That voice is front and center on much of Masseduction and, well, Clark does not disappoint. She roars through pseudo-pop anthems like “Pills” and “Masseduction” with the ferocious glee of a true vocal diva. Even when the overall soundscape of Masseduction errs on the side of sugary, it’s still a far cry from the bubblegum-flavored tripe that dominates popular radio. That’s because Clark tempers the sweetness with the same thoughts and themes that embody the edgy, sardonic, and insightful songwriting that her fans have come to expect. Though Masseduction often sounds like pop, Clark is far more concerned with undercutting the empty vessel that is pop stardom than actually joining the party. By that standard, Masseduction is most effective when it delves into maudlin balladry like “Happy Birthday, Johnny” and “Smoking Section.”

That those songs still feel so at home among the big, boisterous pop numbers are what make Masseduction such a unique listen … and why it may be the most complete St. Vincent album yet.

Some cover art speaks for itself. If I tried to add anything to this one, I’d just be showing my ass. But I can tell you that the lime green is a VMP exclusive color variant. Which is pretty sweet.

The first thing you’ll come across in that box is this bit of poetic rambling from VMP Co-founder Tyler Barstow. 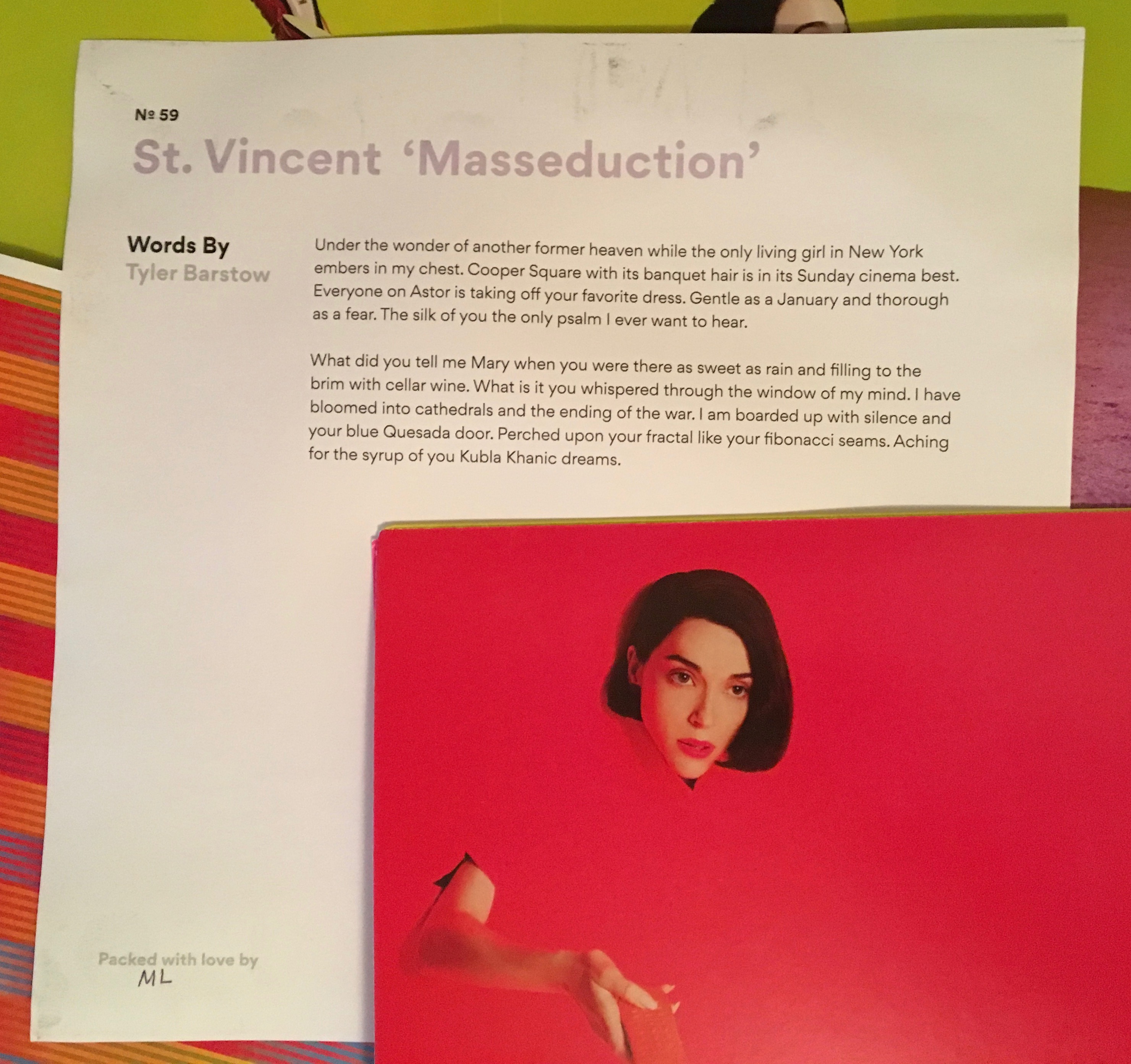 Make sure you check the bottom corner of that insert so you can send some love back to the VMP Staffer who personally packed your box. Thanks for the love, ML.

Flip that insert over and you’ll find the recipe for Masseduction‘s companion cocktail, The Coquette. This one comes via Alamo Drafthouse’s own Brittany Metheny. It’s got cranberry vodka, peach schnapps, and Cava in it, which sort of makes it perfect for St. Vincent’s vibe on this album. Less so for me personally.

Let’s get into that sleeve already, ’cause there’s a sweet little digital download card in there. And you’re definitely gonna want the option to take Masseduction on the road with you. 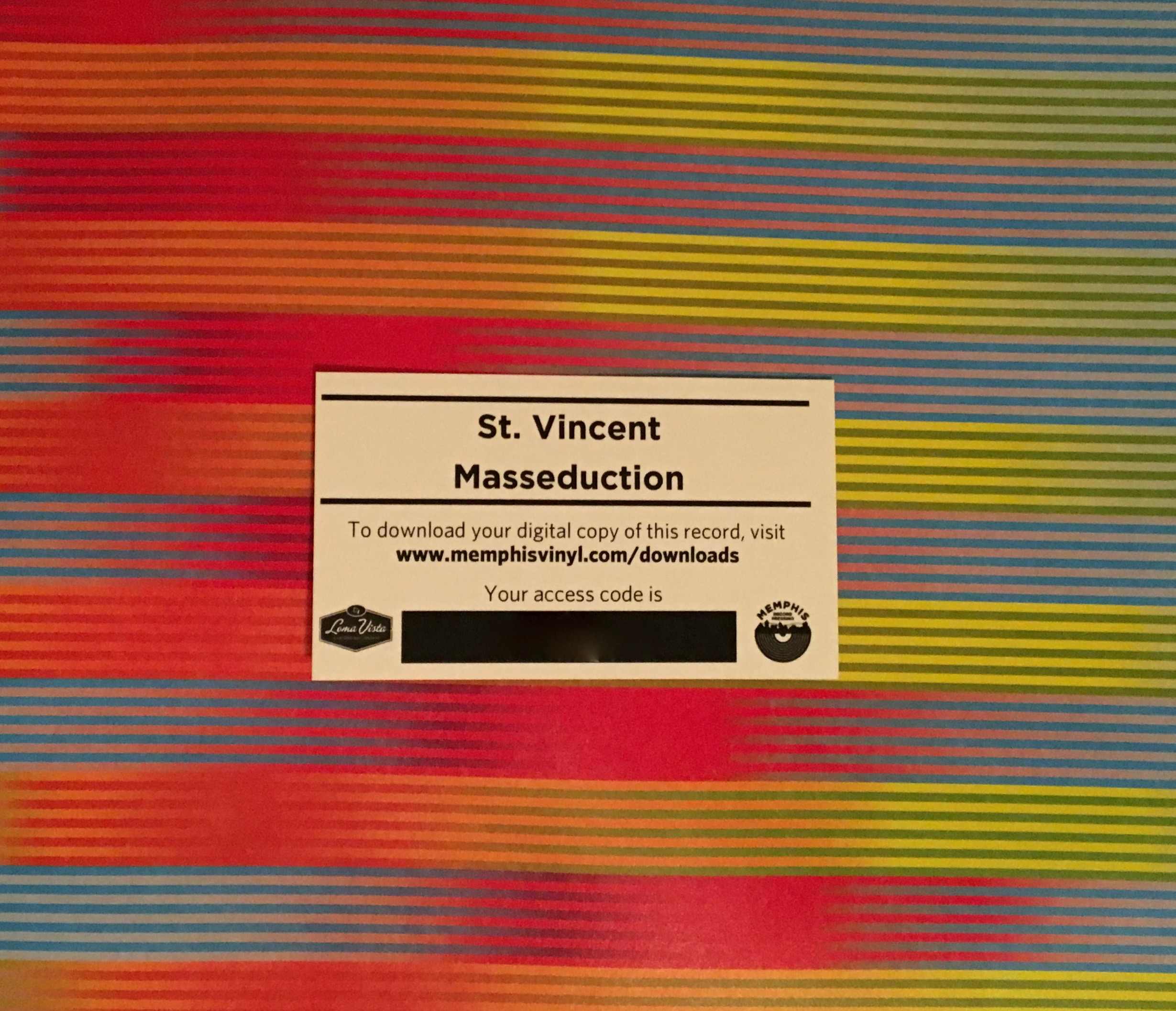 Keep digging and you’ll find this little beauty in there as well. For all you young folks out there, that’s an iron-on decal. It will seriously jazz up your favorite hoody. And you can brag to all your friends that your kicking it way more old school than they are.

The next item you’ll get your fingers on is this slick, 16-page, full color lyric book.

What about that disc? It’s super blue. And it’s tucked inside of a super pink sleeve. FYI – they look great together. 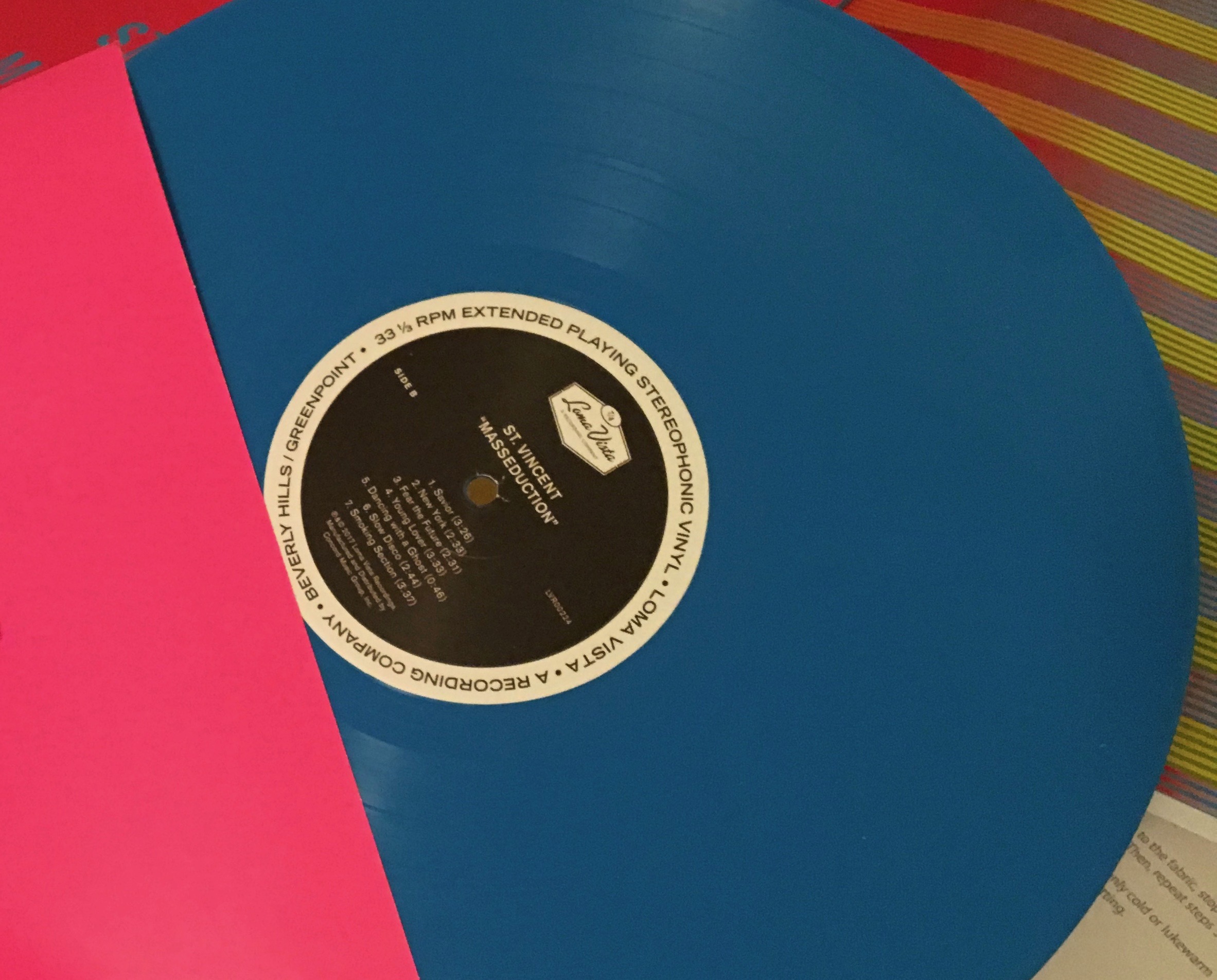 And yes, that blue is gonna bring some serious pop to your deck. Just like the album.

How’s it sound? Like you decided to go dancing with a friend even though you really don’t enjoy dancing. The beats are booming, the vibe is raucous, and everyone around you looks like they’re having the time of their life. You find yourself moving with the beat, but you’re not really into it. You look around and wonder how the hell you ended up in this dance club to begin with and you can’t help but think that everyone around you is just putting on a show for the people around them. Just then, the lights go dark and a slow, sad jam takes over the room. The vacant party people don’t quite know what to make of this unexpected turn. But you smile to yourself, throw your arm around your friend, and begin to sway.

Truth time, I’ve been on the fence about St. Vincent for a few years now. So much so that I’ve never listened to any of her prior albums all the way through. So yeah, I wasn’t really all that excited that the folks at Vinyl Me, Please had chosen Masseduction as November’s AOM, but I’ve been spinning it like mad for a couple of days now … and I don’t see that changing anytime soon. I’m also pretty sure I’ll spend some time working back through St. Vincent’s catalogue in the coming days as well. So yeah, I’d really like to thank Team VMP for helping me see the light with St. Vincent, for letting me experience her music on vinyl, and for making every month another musical adventure.

A big THANK YOU to our friends at Vinyl Me, Please for sponsoring this subscription. Don’t forget to check out the official Vinyl Me, Please website and sign up to get some choice wax delivered right to your door each month! Can’t wait to see what crunchy treat they send our way for December!