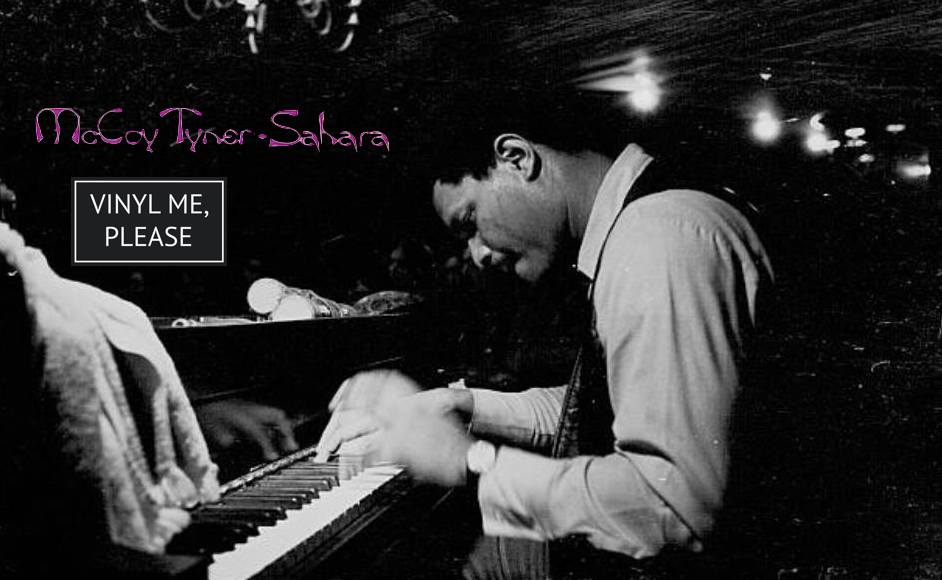 Here’s how it works. You send Vinyl Me, Please some of your hard-earned money (a three month plan will run you just $81) and they send you one carefully selected album they feel is an Essential addition to any record collection. Easy, right? Each custom pressing (often on colored vinyl!) also comes with killer special features like original artwork, informative booklets, and even a recipe for a companion cocktail. You’ll have membership privileges in the VMP shop too, which means you can grab a copy of previous VMP selections from the archives – including their jaw-dropping, 10th Anniversary re-issue of The White Stripes sophomore release De Stijl – not to mention a bevy of rare releases pressed exclusively for the folks at Vinyl Me, Please. The store is open, and Team VMP are dropping fresh new selections to their stock every single week. Do not miss out.

What’s on deck for July? Get ready for a marvelously manic jazz masterpiece from the great McCoy Tyner.

For the Love of Music, Please DO NOT BEND (or how I learned that the Swaps train is the best way to get down with that Classics jazz thang)

Some of you are likely well aware that McCoy Tyner’s Sahara was not, in fact, selected as the Vinyl Me, Please Essentials selection for July. That honor went to John Mayer’s 2006 release Continuum; which is an album I have zero interest in mostly because I have even less interest in Mayer’s music in general. Now, before all you Mayer die hards out there get worked up into a tiz, I’ll simply offer that that’s my own personal opinion. Also, I get why so many people love his music as he’s an adequate guitar player, and he writes endlessly catchy hooks that convey that silky smooth coffee house vibe so many listeners crave. So if you love John Mayer, I have zero problem with that, and I can guarantee you’ll be blown away by the gorgeous VMP pressing of Continuum.

That being said, Mayer’s stuff is really just not interesting to my ears, so July offered me another chance to jump on the Vinyl Me, Please Swaps train and dig out some 12″ inch treasure of my own. And treasure I found in McCoy Tyner’s 1972 stunner Sahara, which was the VMP Classics pick for July.

If you’re a jazz lover, Tyner’s name will be more than a little bit familiar. That’s because he’s a legit icon from the bop/post-bop era and beyond who broke through in the ’60s playing piano for John Coltrane’s legendary quartet. Yes, that means Tyner tickled the ivories on some of Coltrane’s best-loved recordings, including My Favorite Things (1961), Ballads (1963), Live At Birdland (1964), and, of course, Coltrane’s most enduring masterwork A Love Supreme (1964).

And if you are familiar with McCoy Tyner’s work with the John Coltrane Quartet, you know he built quite a reputation for delivering melodious flights of fancy as fevered and fiercely controlled as Coltrane himself. That reputation was only bolstered by the birth of Tyner’s solo career in 1966, the year after he officially parted ways with Coltrane and Co. No longer sitting second-chair to the avant-garde sax master, Tyner set out on a series of recordings as wildly unpredictable and melodically volatile as anything he recored with Coltrane. In doing so, he developed his own signature sound … one as influenced by African and East Asian instrumentation as it was the fiery jazz he’d been playing since a teen in Philadelphia.

Between 1967 and 1970, Tyner released several albums through the famed Blue Note jazz label, each of which intriguingly riffed on the style he’d developed alongside Coltrane, though none found quite as much favor. The pianist and composer signed with Milestone in 1970, and went into the studio bent on pushing his sound further than ever before. The result was Sahara, a singular sonic exploration of piano-driven jazz that frequently incorporated the sounds of flute and koto (played by Tyner himself in addition to all of the album’s piano), and found Tyner and Co. often giddily rolling off into wild melodic experiments as deceptively erratic as they were dazzlingly dulcet.

And even as Tyner tried to distance his music from overtly political statements the frenzied energy fueling Sahara teeters ever on the fringes of anger, dismay, and eternal hope. Coupled with the distinctly African flavors within, Sahara clearly reflects the timbre of the African American experience in the early-70s. Amid the turmoil of current times, it’s clear those themes are as vital today as they were when Tyner was exploring them almost 50 years ago.

If it feels like I’m not getting very specific about the five original McCoy Tyner compositions that form the heart of Sahara, it’s because there really aren’t words to fully convey the passion and emotion they elicit. As such, if you’ve found anything at all I’ve written here interesting, you should seek out Sahara for yourself via CD, or streaming service, or whatever and give it a listen for yourself. Of course, if you can get your hands on a copy of this Vinyl Me, Please pressing, I can assure you you’ll experience it more or less exactly as it’s meant to be.

Even if he was always exploring the Black struggle in America through song, McCoy Tyner never really embraced the concept that his music was political. Still, Tyner clearly had something very specific to say through Sahara‘s cover art with this shot of him gazing ponderously (koto in hand) at landscape dominated by sprawling urban rubble.

There’s a few choice words on the album’s back cover from Rolling Stone magazine contributor Bob Palmer about the joy of Sahara … not to mention album credits in case you’re dying to know who joined McCoy Tyner in its recording. And you should be.

Be sure not to glance over the solid gold foil stamp forever proclaiming McCoy Tyner’s Sahara an official Vinyl Me, Please Classics pick.

Of course, before you even take Sahara out of its re-sealable protective sleeve, you’ll also want to check out this hype sticker, ’cause it’ll tell you exactly why this pressing of the McCoy Tyner classic is the definitive pressing. AAA lacquers cut by Mr. Ryan Smith at Sterling Sound? Check. 180g audiophile vinyl pressed at the famed Quality Record Pressings plant in Salinas, Kansas? Check. Exclusive listening notes? Check. Sure as hell sounds like a definitive pressing to me.

Once you’ve dug your disc out of that protective sleeve, take some time to read the special Vinyl Me, Please OBI strip. That’s where you’ll find out the artist’s and album’s name, as well as the VMP catalogue number. Say hello to the 38th edition of the Vinyl Me, Please Classics track.

Flip it over and you’ll get a taste for why Vinyl Me, Please decided to make Sahara‘s Classics status official.

Now, the only drawback about opting into the VMP Classics track on any given month is that Classics picks do not come with original artwork or a companion cocktail like their Essentials brethren. Luckily, Team VMP more than makes up for their absence with a killer Listening Guide detailing the importance of each Classics selection. This month’s guide finds Natalie Weiner exploring the recording life of the great McCoy Tyner, and offers a few fascinating insights into what led him to Sahara.

We mentioned the Vinyl Me, Please edition of Sahara was pressed at QRP earlier. That, of course, means it comes fitted in one of those fancy QRP archival quality inner sleeves too. Which is pretty sweet.

As for the wax inside, it’s black, and glossy, and oh so pretty.

Make no mistake, it’s gonna bring some serious class to your deck as well.

How’s it sound? Like you stumbled home after a long night out on the town, threw your favorite piano jazz album on your deck to wind down, but played it at 45RPM instead 33.

Give It A Spin

As evinced by this month’s Essentials pick, it’s clear that the estimable folks running Vinyl Me, Please simply cannot please everybody with every pick. But not only do they fully understand that fact, with the additions of their Classics and Rap & Hip Hop tracks (not to mention their own marvelous Essentials back catalogue), they all but ensure that if you’re just not feeling the Essentials pick, you’ll absolutely be able to find something interesting to Swap for it when the time comes.

That time came for me this month. And while I wasn’t all that familiar with McCoy Tyner’s solo efforts, I gotta admit Sahara has proven a revelatory album for me. One that I likely never would’ve heard had it not popped up as Vinyl Me, Please Classics pick for July. As it is, I’m certain I’ll be getting down with this masterfully manic jazz opus for years to come. And I’d like to sincerely thank the folks at Vinyl Me, Please for sending this little beauty my way and letting me discover it the way it was meant to be heard.

A big THANK YOU to our friends at Vinyl Me, Please for sponsoring this subscription. Don’t forget to check out Vinyl Me, Please‘s official website and sign up to get some choice wax delivered right to your door every month! And be on the lookout for our August unboxing so you can find out all about VMP’s scorching repress of the iconic release from the Cuban jazz collective known as the Buena Vista Social Club.