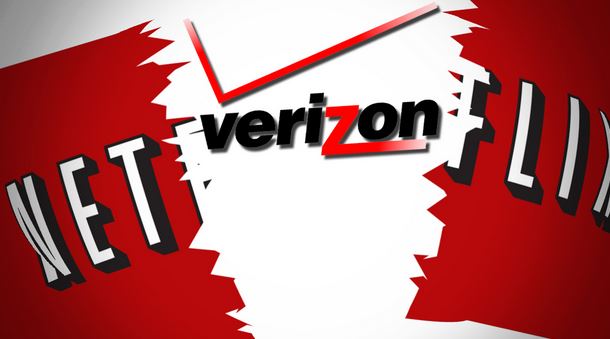 Netflix is available to stream movies and television shows on nearly every single device that can connect to the Internet. Be it on a computer, a phone, or a tablet; Netflix is all over place and it is certainly here to stay. Another major company that is just as ubiquitous is Verizon. Almost everyone is aware of their phones and their various other services, including Internet and cable through their Verizon Fios service. The two giant companies have been appearing together recently, but in lawsuits. Verizon is suing Netflix over claims of Internet connection problems.

Is Verizon To Blame For Slow Streaming?

Netflix is placing the blame on users inability to stream movies and shows smoothly on Verizon’s Internet service. For example, when a movie is taking too long to load, or is the streaming is not coming in too clear, a loading screen will appear with the Netflix logo and a progress bar. Above the bar, it will say “The Verizon network is crowded right now.” This may not seem like such a big deal, but on other Internet service providers that Netflix is available on, such as Comcast, there isn’t a message specifically blaming the provider. Connection problems when streaming video occur on all carriers, not just Verizon.

What makes this situation surprising is that not too long ago, Netflix tried to cut costs on their bandwith and servers by having their services being streamed through certain cable providers. Verizon and Comcast had both signed a deal that allowed Netflix to be available through their services in a particular package deal for customers. Verizon has allowed Netflix to use it’s own servers and bandwith, in order to help Netflix save some money in the long run. They had only signed this deal in April of this year as well.

Upon hearing about this issue, Verizon issued a cease and desist order on unfair business practices. The letter of the cease and desist order which is written by Verizon’s Executive Vice President Randal Milch. The letter is also written directly towards Netflix’s General Counsel David Hyman. The letter, which is widely available on DailyTech.com [source below], details on the agreements that the two companies had agreed on and how Netflix is backing down on that agreement.

Receiving the news of a potential lawsuit on their hands, Netflix Inc. officially released a statement that said, “This is about consumers not getting what they paid for from their broadband provider. We are trying to provide more transparency, just like we do with the Netflix ISP [Internet Service Provider] Speed Index, and Verizon is trying to shut down that discussion.” In the same statement, Netflix Inc. also claims that the connection and streaming problems on Verizon were based on a test within several households nationwide.

Verizon is suing Netflix over Internet connection problems is bound to be on the year’s biggest potential lawsuits. It appears that, at this time, Netflix is not backing down from the cease and desist order and will continue their practices. All of this could result in a major court case, and Netflix losing one of the biggest providers. What started out as a cost cutting measure, has turned into a possible major money losing problem for both companies.