With the fourth chapter of The Wolf Among Us whetting our appetites for the climactic ending of Sheriff Bigby Wolf’s murder investigation, what better to time to look forward to the next Telltale game we can all drool over?  Or maybe in this case bleed, lie, cheat, and steal over it.  After the final act is released rather than bidding a sad farewell to the good folk of Fabletown, instead let’s all look forward to greeting the bloodthirsty cons and ne’er-do-wells in Tales from the Borderlands.  The next adventure is due later this summer and will take place after the events of  Borderlands 2.  The game will feature old characters from the Borderlands game series alongside original characters, and promises to further explore the dark nature of life on Pandora.  But  like the first crossover between Gearbox and Telltale (Claptrap’s appearance in Poker Night 2) we can also look forward to copious amounts of good old-fashioned Borderlands humor.  And copious amounts of Borderlands blood. 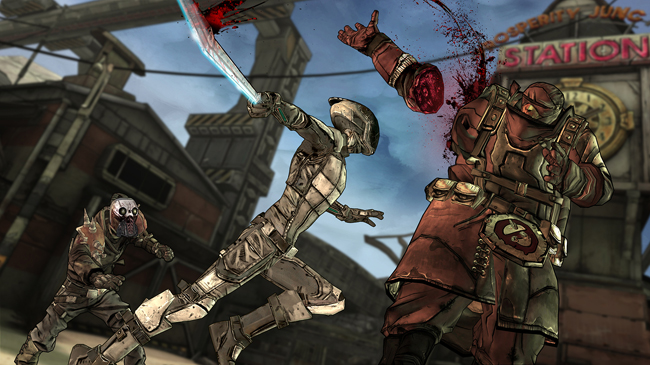 Rhys, a Hyperion data-miner, is on Pandora thanks to his own grand and shady ambitions (sounds like a man after Jack’s own heart.)  Fiona is a con-artist, born and raised on Pandora, so for her I’d expect to see the predictable severe psychosis, bloodlust, and tortured past one would expect from anyone spending a lifetime on the ravaged frontier planet.  The player will get to experience the common events of the story through the eyes of both characters.  The latter part of the game will reveal how the two are brought together, as well as reveal how they discover the effects that the death of Handsome Jack has had on Pandora.  The stories of both characters will be motivated by the one truly great truth of Pandora’s history: greed.  Greed for loot, greed for money, greed for power.  It’s designed as an unavoidable and integral part of the story, challenging the player not with how to avoid it but how they will express it.  Who will you backstab?  Who’s deceiving you for their benefit?  Who will you deceive?  Who will you save, and who will you kill?  Like other Telltale games, the player’s choices will affect the nature and progression of the story in later chapters.  Also in normal Telltale fashion the game will be released in a series of episodes.  And it will hold true to Borderlands tradition by incorporating shooter elements as a major part of the game, and the obligatory guns and loot.  Perhaps one of the most interesting features will be the incorporation of loot that can even be used in other Borderlands games.  As a discriminating loot-junkie in every game I play, the prospect of adding even more sweet swag to my arsenals gets me really excited.  If you ask me playing a brand new Telltale crossover is a great alternative to boss and badass farming.  More details are set to be revealed soon at E3.

Kyle is recent Purdue University graduate who only enjoys gaming as much as he does writing. MMOs, RPGs, Platformers, and Mecha run through his blood and eat his time. He finds only one thing more tantalizing then the ball of yarn know as "Star Citizen" that Chris Roberts' dangles before him; Guinness.