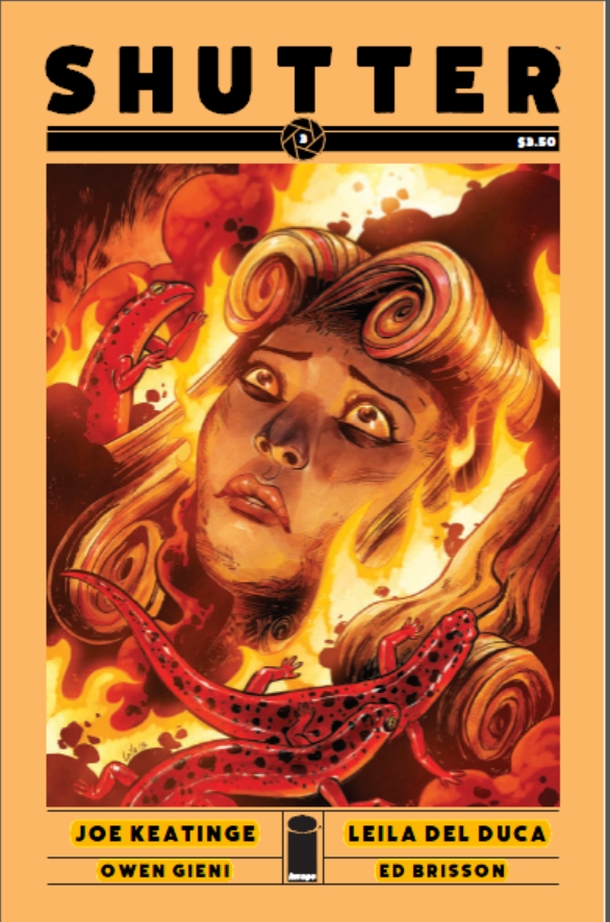 With every issue of Shutter comes the overwhelming feeling that confusion is not only part of the deal, but an integral piece of the puzzle. That should be a negative, but with this team behind it, it really shouldn’t be any other way.

Am I talking in riddles? Probably. But then, everything in the Shutter universe seems to be a riddle, so it seems like an apt way to do the review.

Shutter #3: The Wonderful World of Shutter

Issue 3 poses more questions than it manages to answer. The most pressing is Alain’s back story because, well, it is not the backstory I was expecting. (Nothing is confirmed, but if what I think is going on, is going on….I love you DOUBLY AS MUCH, Shutter Issue 3)

Alain is Kate Kristopher’s best friend, they’ve been best friends since they were kids. How they became friends is not the unexpected bit. In fact, it’s the only part in the entire issue (possibly the entire Shutter universe) that I was all “Yeah, that seems completely plausible and possible”. The rest? There’s no way to describe how unexpected it is and even by knowing that the unexpected is waiting for you, you will still finish Issue 3 of Shutter and say “I did NOT expect that”.

Issue 3 of Shutter doesn’t even start out the way you expect.

The artwork and coloring is markedly different from what we’ve seen in previous issues. It’s so different, that I went back to check that Del Duca was still in charge of making the pretty things. She is, phew!

If I’m being blunt, I didn’t dig the change to begin with. It felt babyish, it felt like something that 16 year old me could have drawn. Then I realized even at 16 I wasn’t Richard Scarry and then my mind was blown.

Once I realized that, everything that was already pretty sad became even sadder.

But it was too late to dwell on emotions because Del Duca draws pretty explosions and the gore factor was reaching near critical. Not the same scale as say, a bloodied Kick Ass splash page. But very close to it.

Del Duca is fast becoming one of my favorite comic book artists (watch out, Upchurch!). Not just because she draws eyes incredibly well, but because she’s showing herself to be pretty flexible with her style.

The storyline itself is…. I don’t know. The universe and story are just so abstract that I couldn’t tell you whether it’s well paced, or even developed properly because it’s just so out of any realms of understanding by which to measure it by. It’s immeasurable. Which is maybe why it’s so much fun to read.

If you’re willing to go along for the ride, Keatinge does a great job of suspending reality. But you have to be willing to let go. Sure, if you’re the kind of person who doesn’t enjoy letting go or expects a comic to resemble some logical bone structure, then you’re wading into an ocean of stuff you won’t be comfortable with when it comes to Shutter. But I say wade into the ocean anyway! With the combined efforts and talents of the team behind Shutter, it won’t take you long to reject your own reality and substitute theirs in it’s place.

A good example- At one point, there’s a dude who’s just full on a skeleton and I didn’t even question it. In fact, if dude had been anything in the way of being a person, I would have been all “Hey, that’s not right!”.

This issue has all the things I wanted, plus some things I didn’t know I wanted, till I saw them. Most importantly, I want to see the next issue NOW. But while I wait, much like with the next A Song of Ice and Fire books, the real pleasure will be in the theorizing. With so many possible explanations that are probably wrong, Issue 3 of Shutter will keep me entertained until Issue 4 arrives.

That’s why I’m not afraid to give it bananas out of 10.