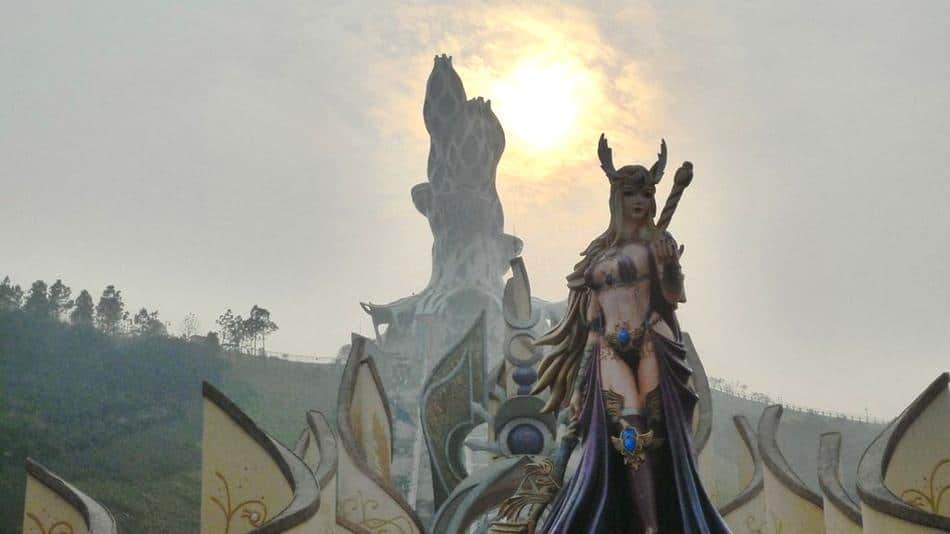 In a world where creating an almost-but-not-quite-cool, non-licensed, total knock-off theme park is awesome and getting the go ahead from the intellectual property owner to create the real thing is totally lame, there’s World of Warcraft knock-off, World Joyland, in Changzhou, China. Now you no longer have to settle for knock off electronics, video game consoles, fashion, and whatever else China can knock-off and crank out for a fraction of the price, because they just whipped out a whole unlicensed theme park that is officially open for business.

Despite the fact that it’s a total rip-off of American-based Blizzard’s hard work, it does look kind of fun. I mean, come on. The Warcraft section of the park is labled, “Terrain of Magic.” What couldn’t be completely legit about something like that, right? There’s even a Starcraft-based section called ,”Universe of Starship”. See what I mean? With a name like that, it has to be quality fun for the whole family. Sporting a price tag of $48 million, World Joyland may have also claimed the title of ‘Most Expensive Intellectual Property Copyright Violator…Ever’.

Curious as to what sort of attractions this wanna-be-Warcraft-wonderland has to offer? The folks over at Shanghaiist took a tour of the park and took a ton of pictures of their experience. They also had this to say about the one of the rides:

“Our first ride was an exciting little number called ‘Splash of Monster Blood’, and they’re not kidding about the splash. We’ll just say this much: Trying to act cool by refusing to buy a sky blue poncho on the way in, is a giant nOOb stamp. The ride was, as its sign board attests, a ‘beast-bloody journey’ (a.k.a. Your standard amusement park log ride affair). After clicking and chugging up a tunnel full of orcs and monsters, you are plunged down into water that manages somehow to smash you from both the front and the back simultaneously. “

Sounds like your next summer vacation destination, doesn’t it? Thought so. Don’t let the whole infringement of copyright thing stop you, either. China is obviously way cooler with that kind of thing than those silly law-abiding people in America. While you’re there, you might as well hit up ‘Universe of Studios’ or ‘Doosney Land’ and take the kids to see Rickey Mouse!

Would you visit World Joyland? Let us know what you think in the comments below!