Home Business Universal Control: Run Your Electronics from Anywhere with My N3RD
Business

Universal Control: Run Your Electronics from Anywhere with My N3RD 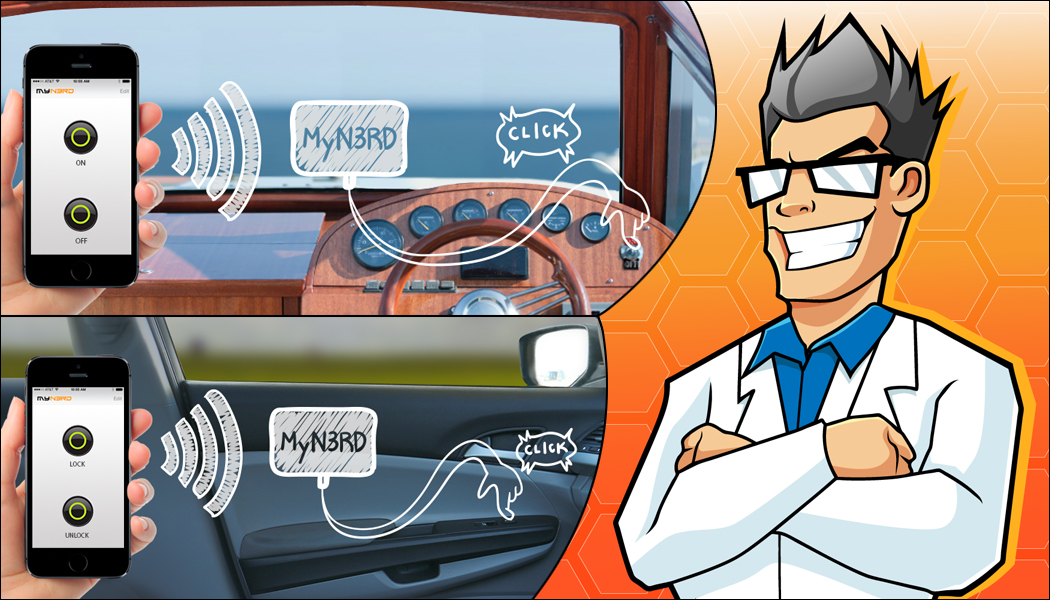 I saw the Adam Sandler movie ‘Click’ once. I can’t really remember why, and in hindsight it was not a justifiable move. Even so, I’d like to have a magical remote control, especially since I’d use it for much more interesting things than getting into weakly amusing escapades and causing arguments with Kate Beckinsale. Handily, consisting of 100% useful go-between technology (and 0% Adam Sandler association), My N3RD is an internet-accessible device for setting yourself up as the idle tyrant of any vehicle, appliance, gadget, gizmo, or robotic pet in your possession. In fact, if something draws power and functions through a switch, My N3RD should be up to the task, with a versatile and developing platform to complement its core functionality. Budding engineers, intrigued geeks, control freaks, lend me your reading comprehension; I’ll explain why you may want to peruse this Kickstarter page and make My N3RD yours.

Connecting to the Grid

Developed by Kansas-based Wild Hare—founded and helmed by Rob Dorrell—My N3RD is a Wi-Fi-enabled programmable module with two inputs and two relays for interfacing with devices you would otherwise engage locally. In doing so, it allows you to set routines, or assume direct control through remote networking. Primarily, you’d likely use a smartphone to make changes; there’s an iOS app live already, and an Android version on the way. The outline lists various potential uses for the unit, such as opening and closing a garage door or scheduling sprinkler activation, and the smart processing capability allows for sophisticated patterns in conjunction with the multiple ports.

The provided example involves checking internet connectivity and rebooting modems and routers in an appropriate sequence in the event of a problem, but it’s not hard to think of other uses. Someone looking to save on electricity but too forgetful or busy to do it manually, for instance, could hook it up to the main power for several rooms and draw up a plan based on their typical activities to shut things off when they are unlikely to be in use.

The average Kickstarter campaign seems fairly cut and dry; if the goal is reached, the product is made according to the listed specifications, with rewards for substantial backers typically including branded hats, lunches with development teams, or even facility tours. That’s absolutely fine, but anything more than the listed goal tends to just be viewed as icing on the cake, with the idea that a use will be found for it at some unclear point. The campaign for My N3RD, however, is rather more interesting, with the scope of the concept allowing for some cool tiered targets. If they hit $75k, for instance, they’ll get right to extending the functionality of the existing iOS app and provide a web interface for access from any platform.

It’s the $110k target, though, that really catches the eye, offering the ability to tie My N3RD actions to data accessible from the aforementioned web interface. In doing so, it would dramatically increase the already-impressive possibilities. If a user could enter the program, identify a condition from another website, app, or program, and set it as the trigger for a particular action or sequence… well, that would be a ton of fun just to play with, let alone make practical use of. I rather hope there’s a celebratory neon sign at Wild Hare headquarters flashing madly due to an influx of backers, because I’d like to see more campaigns being this ambitious.

I’ve barely scratched the surface of My N3RD, a product extremely difficult to tackle properly with any kind of brevity, but I hope I’ve given some notion of its capabilities. I don’t know how difficult an engineering layman would find the setup process, but assuming the documentation can hit the right level, it should just be a case of getting across the basic principles so people know what it can and can’t do. The Production Model will set you back $75, and whether that’s worth it will depend entirely on how you use it. Though the value is pretty clear when you consider that there seems to be a decent market for internet-capable versions of existing appliances. Take for instance the $12k smart cooker that I mentioned in a CES piece last month. While I’m not saying it does nothing to justify its price tag beyond having remote control functionality, the prospect of adapting a regular old cooker with a relatively-inexpensive device and getting something not hugely dissimilar is very appealing.

On the evidence of this still inchoate endeavor, I think there’s every reason to be excited about the future of My N3RD. I’m especially curious to see how cheaply they can eventually produce individual modules if they can sell decently early on, as picking up a set of them to put together a smart house would be a fantastic project for any geek. Take a look, see what you think, and shower them with dollar bills if you like what they’re doing, or just back them normally if you’re a boring person who doesn’t like money showers.