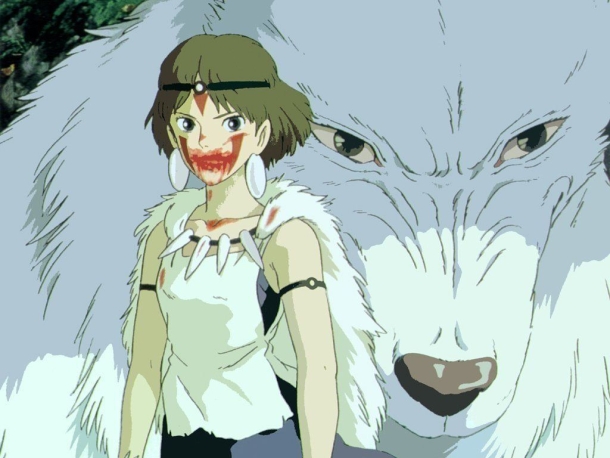 Hundreds, if not thousands, of people Cosplay Princess Mononoke every year. She’s the main character of the Studio Ghibli movie of the same name, but what’s so interesting about her?

What’s so  undistressed about this particular damsel?

Princess Mononoke (also known as San) isn’t your typical princess. In fact, if you took all of the stereotype activities and traits of princesses, she’s the opposite. Where princesses are gentle and forgiving, she’s harsh and determined to make humanity pay for what they’ve done. She is the epitome of what happens when someone isn’t constrained by social norms. She’s royalty, but the old kind of royalty. The royalty that claimed it’s place through it’s actions, not just a blood line.  She doesn’t hang out on the balconies of castles singing to Blue Jays, while waiting for some guy to slash his way through a forest of thorns and rescue her.  No, she hangs out in forests, with wolves. Girl is a free spirit. She doesn’t expect anyone to save her! Plus, she’s pretty big on the environment, so even if a guy did try and rescue her by cutting his way through a forest of thorns…. She would not approve.

When she is distressed, she doesn’t deal with it the way the normal princess would. They usually sit around, complaining that their kingdom is in turmoil and whatever will they do! She doesn’t roll that way. She takes the fight to the people who are causing the problems. Instead of waiting for a prince to come and save her, she saves a prince and trades projectiles with her enemies. She’s not waiting for her cue to save what she loves, she’s already out there with fangs bared and weapons ready.
Her’s is the opposite story to Little Red Riding Hood. Or the story that might have been if Red was all, “You know, my parents are so irresponsible that they just send me into dangerous forests with food. Lumberjacks barge into people’s houses and hurt the native animals, which are sentient enough to engage in discourse with us. Those native animals are probably just driven to a life of crime through the decrease of resources available to them, due to human encroachment. Judging from all of this evidence, humans are the worst kinds of people. I’m going to change sides!”
Princess Mononoke isn’t a fan of humans. She’s so not a fan, that to say she’s in touch with her ‘animal side’ is an understatement. As far as she’s concerned, she’s a wolf. No one can tell her differently and nothing will change her mind. You have to admire someone that determined to be who they want to be. Especially when they want to be is something outside of their own species.  As a wolf, she’s not really interested in impressing human boys or asking them for her help. If she gets distressed, she finds her own way to solve it. Those damn, dirty, stinkin’ humans can get their hands off her!
She’s also really great at accessorising. Usually, I’m not a fan of fur. But what she manages to do with just a little bit of drippy blood, a wolf pelt and a nasty dagger? Fierce!
princess mononokestudio ghibli
0 comment
0
FacebookTwitterPinterestEmail

Yahoo! Getting a new Logo in September